RIO DE JANEIRO, May 5 2008 (IPS) - The Colorado Party has become a "criminal mafia" during its 61 years in government in Paraguay, and it will continue to be a force to be reckoned with in spite of its defeat in last month’s elections, says Anuncio Martí, a Paraguayan citizen living in exile in Brazil. 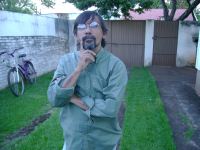 Martí said he was abducted and tortured in Asunción in January 2002 by "a paramilitary and parapolice group linked to the government." Since 2003 he has lived as a political refugee in a Brazilian city, along with two fellow members of the Partido Patria Libre (roughly, Free Homeland Party, PPL), Juan Arrom and Víctor Colmán.

Martí rejoiced at the victory of opposition candidate Fernando Lugo, a progressive Catholic bishop who was elected president in Paraguay on Apr. 20. But he still has mixed feelings of hope and fear. The election result was "an important step forward for democracy," but "not the beginning of a real process of change," he told IPS.

"We hope that at least the criminalisation of social struggles and mass movements will end," so that "construction of a participative democracy" can begin, he said. His scepticism with regard to the prospect of a government of the people, led by Lugo who is known as "the bishop of the poor," is partly due to his own personal experience.

On Jan. 17, 2002, Martí and Arrom were kidnapped in downtown Asunción, taken to a clandestine location, and brutally tortured for nearly two weeks by a group of 15 police and military personnel and criminal investigation agents belonging to the official Centre for Judicial Investigations (CIJ).

"The struggle against the dictatorship" of General Alfredo Stroessner (1954-1989) "had just ended, and we lowered our guard" after he was overthrown, Martí admitted. Then his group of activists founded the Movement (now Party) for a Free Homeland (MPL, now PPL), a Marxist revolutionary movement.

"After the military dictatorship, we didn’t think that the torture centres would continue to exist. We learned the hard way, by experience, and we were lucky to survive, when so many lost their lives," he said.

Martí and Arrom were rescued by relatives and human rights activists who mobilised during those two weeks, and managed to find the house on the outskirts of Asunción where they were being held, on Jan. 31. Finding the house surrounded by relatives and journalists who had been called to the scene, the kidnappers fled, leaving the two detainees behind.

Both required hospitalisation for their torture-related injuries. Two years later, in exile in Brazil, Arrom had to undergo corrective surgery to his hip as a consequence of the abuse. In Martí’s case, the gashes on his wrists are the most visible scars.

The torture the men were subjected to mainly involved "direct blows with iron bars, fists and firearms, as well as near-suffocation with plastic bags and near-drowning in water," said Martí. The plan was to make them both "disappear," but they escaped with their lives because their captors "did not agree" on how to kill them, he said.

There is no doubt that the death squad was acting on orders from the government of former President Luis González Macchi (1999-2003), Martí said.

On the third day of their illegal detention, the Interior Ministry publicly accused Martí and Arrom of kidnapping a wealthy Paraguayan woman, and said they were both "fugitives." A mock police operation was deployed, ostensibly to search for them along the Brazilian border.

Arrom, the head of the MPL, reported that two government ministers tried to persuade him to sign a declaration that his movement and other opposition groups were planning a coup d’état, in return for giving him his freedom outside Paraguayan territory.

"They wanted to make us scapegoats, an excuse for a crusade against supposed ‘terrorists’ in Paraguay, and for clamping down on the people’s mass movements," said Martí, pointing out that these events followed the Sept. 11, 2001 terror attacks in the United States, which he said served as a pretext to crack down on social activists in many countries.

Washington maintains that the area where the borders of Paraguay, Brazil and Argentina meet, known as the Triple Frontier, is a hotbed of international terrorism, he said.

In 2002 the government went on the offensive against the MPL. Three other activists were also arrested and tortured, among them Víctor Colmán, who was granted asylum in Brazil in 2003, where he joined Arrom and Martí.

The MPL was also accused of being the "Paraguayan arm" of the Revolutionary Armed Forces of Colombia (FARC), because of the movement’s solidarity campaigns for the Cuban Revolution and its support for a negotiated peace agreement in Colombia, which has lived through almost half a century of armed conflict, Martí said.

In the wake of the scandal that followed the kidnappings of Arrom and Martí, Interior Minister Julio Fanego and Justice and Labour Minister Silvio Ferreira, who had proposed the false confession to Arrom, both resigned.

The chief of police was sacked and the National Information Service (SIN), made up of members of the armed forces accused of the abduction and torture of Martí and Arrom, was dissolved.

Members of Congress blamed these events on González Macchi and Attorney General Oscar Latorre, but no one was brought to justice.

The Inter-American Commission on Human Rights (IACHR) ordered precautionary measures to protect five members of the PPL, including Martí and Arrom.

The case has also been taken to the Inter-American Court of Human Rights, where a decision is pending.

Experience would indicate that the Colorado Party "mafia, that enriched a small group of Paraguayan families," will put up a stiff opposition, threatening the dreams encouraged by the elections, Martí said.

"Everything depends on whether social and mass people’s organisations are able to influence the direction of Lugo’s government," he concluded.

In a drive-by shooting on Apr. 8, Alfredo Ávalos, a leader of the Tekojoja popular movement which supports Lugo, was seriously injured, and his Brazilian wife Silvana Rodríguez was killed, a clear sign that violence continues to be a hallmark of Paraguayan politics.