LA PAZ, Jun 12 2008 (IPS) - Domestic workers in Bolivia, most of whom are young indigenous women from the highlands region, are about to gain access to healthcare coverage. 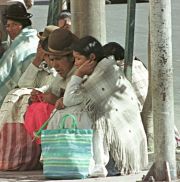 A law in effect since 2003 already limited their workdays to 10 hours in the case of live-in workers and eight hours for those who live independently, provided them with holiday bonuses and days off, stipulated that they should be able to go to school, and granted them all of the rights outlined in the General Labour Law.

But the articles on healthcare and pensions required specific regulations before they could be implemented.

The draft regulations on the former were sent to President Evo Morales on May 27. When he signs it into law, domestic workers will finally have broad healthcare and hospitalisation coverage for themselves and their children, with doctors available in the evenings (from 5:00 to 9:00 pm) so as not to interrupt the women’s work schedules.

“This is a very positive moment,” Basilia Catari, secretary of organisation at the National Federation of Domestic Workers of Bolivia (FENATRAHOB), told IPS.

“The members of the unions are currently involved in talks to possibly join the Caja de Salud Bancaria (the health care plan for bank employees),” one of the three health plans mentioned in the draft regulations, said Catari, a representative of the union of Sopocachi, a La Paz neighbourhood, and a former leader of the Latin American and Caribbean Confederation of Domestic Workers (CONLACTRAHO).

The draft regulations, presented to the government by the Instituto Nacional de Seguros de Salud (INASES – National Health Insurance Institute), a state agency, and pressed for by the country’s organised domestic workers for five years, codify article nine of law 2,450, which entered into force in 2003.

Article nine makes it obligatory for employees to pay social security contributions for their domestics, amounting to the equivalent of 10 percent of their wages.

FENATRAHOB has proposed that the money be deposited monthly in the union’s bank account. But the specific mechanisms have not yet been worked out. The draft regulations merely suggest a collection system “that would ensure the sustainability of social security.”

According to INASES director Romel Rivero, once the president signs the regulations into law, a team of experts will analyse the exact mechanisms for the collection of the social security contributions and determine who will administer the funds in each province.

But the two-week delay in signing it into law points to more in-depth problems, said researcher Elizabeth Pardo, author of the study “Young Aymara Women, Wage-Earning Domestics in the City of La Paz”.

The regulations were drafted with the support of non-governmental organisations, the ombudsman’s office and the Caja Nacional de Salud (National Health Fund), the health plan that provides hospital and healthcare services to the greatest number of workers in the country.

The prospect of gaining healthcare coverage has made the regular Sunday meetings of the 13 unions of domestic workers that operate in Bolivia’s nine provinces lively affairs.

At the meetings, domestic workers discuss and learn about their labour and social rights. But they also receive training in skills like pastry making, knitting, dressmaking, elderly and child care, and cooking.

The unions are the first door that has been opened up to domestic workers interested in branching out into other areas of work, Pardo told IPS.

But only a small proportion of Bolivia’s 130,000 domestic workers belong to the unions that make up FENATRAHOB, “perhaps because many hope they will only be household workers for a short time,” said Pardo.

According to the 2001 census, 24,200 households employ domestic workers in La Paz alone.

Some families employ more than one domestic, at wages that range from 350 to 500 Bolivianos (between 50 and 80 dollars) a month.

“We teach our members that they must always sign a contract, as the law states,” said Catari.

But Pardo said that because so many of the domestic workers are young migrants from the countryside with little to no formal schooling, it is easy for employers to violate their labour rights.

Domestic workers are a key social sector for Morales, the country’s first indigenous president. In fact, one of FENATRAHOB’s top leaders, Casimira Rodríguez, was justice minister in 2006 and 2007.

Also to go into effect this year is a national certification system to define the work of domestics.

In coordination with domestic workers, the Ministry of Education and Culture drew up a list of 28 specific tasks in seven different categories, to be used in training and certifying domestics, the ministry’s director of technical training, Elmer Acosta, explained to IPS.

Various studies show that domestics in Bolivia suffer triple discrimination: as women, as indigenous people, and as migrants from the countryside, especially in this society “that looks down on domestic work,” says the report “Sociolabour Reality in Santa Cruz”, by Mario Portugal and Dunia Sandoval.

Another study, “Domestic employee needed, preferably ‘cholita’”, published in 2006 by Katrina Peñaranda, Ximena Flores and Álvaro Arandia, found that conditions were especially difficult for recently arrived young women from the highlands, who have no other way of making a living. (“Cholita” is a derogatory term for a young indigenous woman).

Employers, meanwhile, have their own ways of expressing themselves with regard to initiatives like healthcare coverage and pensions for domestics.

“The ladies are looking for young girls who won’t cause problems,” said Pedro Mamani, the owner of an employment agency in La Paz.

For now, the debate on healthcare coverage is the main focus in the Sunday union meetings. “But it is not our last demand,” said Catari. “For us it is very important to push, later, for the right to a retirement pension.”