ROME, Jun 5 2008 (IPS) - The three-day world summit called by the UN Food and Agricultural Organisation to respond to the food crisis ended with plans and pledges – and a new push to liberalisation. 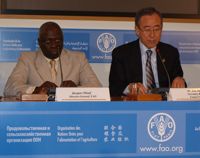 The plan of action, agreed by some 183 countries at the end of the meeting Thursday, does not seek any binding commitment from governments. Its formulation is similar to some declarations on food security issued by the United Nations over the last ten years.

The meeting brought new aid pledges. Some governments and financial institutions between them pledged about 8 billion dollars to get past the crisis. These include the U.S., the World Bank, the Islamic Development Bank and the African Development Bank.

Funds will be used to "help developing countries and countries in transition expand agriculture and food production, and to increase investments in agriculture, agribusiness and rural development, from both public and private sources," the meeting resolved.

FAO Director-General Jacques Diouf said his organisation would need a tenfold increase in its budget to some 30 billion dollars a year to assist farmers facing shortages, price rise and adverse climate conditions. UN Secretary-General Ban Ki-moon said that between 15 and 20 billion dollars is needed annually to boost food production and combat hunger.

They agreed urgent economic assistance for affected countries, and to support agricultural production and trade through further liberalisation and reduced trade barriers. These measures, the conference statement says, would assure "better integration of small-scale producers with local, regional and international markets."

The plan will be implemented by the UN food agencies in "close relationship" with the high-level task force on the global food crisis chaired by the UN Secretary-General.

The task force includes the heads of the UN specialised agencies and the Bretton Woods institutions (the World Bank and the International Monetary Fund).

International small farmers' organisations say the outcome of the high-level conference was disappointing. "The final declaration will not fill any plate; and the recommendation for more liberalisation would lead to more violations of the right to food," said Maryam Rahmanian from the Iranian development organisation Cenesta.

Cenesta is among dozens of non-governmental organisations and small farmers' groups who participated in a parallel food forum of the civil society.

"We are extremely disappointed with the results of this meeting," Rahmanian told IPS. "First of all, we are hearing all the policies and proposals that we already heard in (the World Food Summit of) 1996 and re-heard in 2002. But most of all, we are concerned that the FAO is going to have a much weaker position in deciding food and agricultural policies."

According to Rahmanian, the new task force set up by Ban Ki-moon is going to take all of the decisions.

"The FAO is a much more democratic space to be making decisions; here Asia, Africa, Latin America and everyone can sit around the table and discuss what policies are needed," she said. "But recommending the task force means having the 'heads' of UN agencies and the IMF and the World Bank, with their specific interests, all together." Rahmanian said many of the small countries "are going to be completely marginalised."

This is a new development to have emerged from this meeting, she said. "The policies that they propose are all the same, but the way that they propose to control international policies related to food and agriculture is the real story in this conference."

The issue of bio-energy proved divisive during the summit.

While UN officials said that the fast growth of the sector may have caused up to 30 percent of the global price inflation by diverting food crops to fuel, some countries insisted that bio-energy is responsible for just 3 percent of price rises.

Among these countries were the U.S., the world's biggest producer of ethanol, and Brazil, that has been producing ethanol from sugarcane for the last 30 years.

Finally, there was agreement only that biofuel brings both "challenges and opportunities" to poor countries, and that these need to be investigated further.

"There is a general sense that we don't have enough understanding of the real impact of biofuels on food and the environment," said FAO official Astrid Agostini. "For this reason, the assembly agreed on the need for an in-depth research programme on the use of biofuels, in order to measure the threats and determine the sustainability of such fuel," she told IPS.

The UN Secretary-General stressed the need for an international bio-energy policy. "There is an urgent need to establish a greater degree of international consensus and agreed policy guidelines on biofuel production, which take full account of food security, income and energy needs at all levels of our countries," he said.