PESHAWAR, Jun 13 2008 (IPS) - Health workers fanned out into hundreds of villages in a troubled north-western district of Pakistan to immunise children against polio following a peace agreement with a pro-Taliban faction that had campaigned against the vaccine. 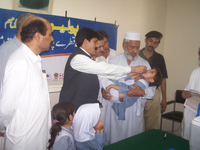 Over three days, from Jun. 10 to 12, more than 250,000 children below the age of five years were administered the oral polio drops in militancy- engulfed Swat district – many of them for the first time.

“I was desperate to get my only child vaccinated against polio but I couldn’t do this due to the opposition by local militants. This time, I have succeeded to give polio drops to my son,” said Hameedullah from Swat, who gave only one name.

Zuhra Begum, a woman from Swat, was all praise for the local North West Frontier Province (NWFP) government, which enabled her to vaccinate her three kids.

The Tehreek Taliban – a radical Islamic group – which ordered people not to administer the oral vaccine to their children brought Pakistan’s anti-polio campaign to a grinding halt last year in Swat, NWFP. Maulana Fazlullah, the group’s charismatic leader, a cleric, deemed the immunisation campaign a U.S. conspiracy to make people impotent and infertile, vituperative propaganda that he unleashed over his popular FM channel.

The resumption of anti-polio vaccination in the district was the result of a peace agreement reached between the NWFP government and the Swat Taliban on May 20.

Pakistan is one of only five countries in the world – including neighbouring India and Afghanistan – where the polio virus still exists.

By Jun. 4, the WHO had reported 590 cases of polio worldwide as against 190 during the corresponding period last year. Pakistan with 11 cases is among the top four endemic countries, including India (251), Nigeria (227) and Afghanistan (8).

Last July, a 22-year-old Pakistani student in Australia tested positive for polio. The case was the first in Australia since 1986. Zaheer Ahmad had only weeks before returned from travels in Swat and Kalam, where he is believed to have contracted the polio virus, according to the World Health Organisation (WHO).

This week health officials told IPS that the Swat peace agreement has paid off and health workers administered polio drops to some 90,000 children in the troubled district on the first day of the campaign.

“The situation is much, much better this time. We have vaccinated children in Matta and Charbagh areas that were inaccessible one year back,” said Abdul Waheed Khan, top polio officer in the NWFP.

Clause nine of the peace agreement states that the Taliban will not pose obstacles to the oral polio programme in Swat.

“We are abiding by the peace agreement. We won’t create any problem, but will support the vaccinators where they face resistance,” Muslim Khan, Tehreek Taliban’s spokesman told IPS. In May last year, vaccination was carried out in 110 areas of the total 180 in Swat, but this time, health workers were deployed in 158, according to Khan.

“We decided to conduct the campaign in trouble-free areas only,” he said.

Shaukat Ali Yousafzai, Swat’s District Coordination Officer (DCO), said health workers had stayed away from nine areas in Swat. “In some of these areas, like Kabal and Matta, the Taliban were unaware of the agreement and were offering resistance. We have communicated this to Taliban leaders and the situation there could improve,” he said.

Rizwan Ali, another health official, said 360,000 children had to be vaccinated in Swat.

The anti-polio programme also received a boost when Tehrik-i-Taliban Pakistan (TTP) spokesman Maulvi Mohammad Omar announced on Jun. 9 that their faction would neither support nor oppose the polio campaign in the tribal region. “Those refusing polio drops are doing it on their own. The Taliban have never stopped anyone from getting polio drops,” he told IPS over the phone from an undisclosed location.

The U.N. and several donor agencies have been pouring huge funds into the anti-polio campaign since 1994, but that has not stopped the virus. Two polio cases were tracked to the NWFP earlier this year.

The Swat agreement is identical to the one reached between the Taliban and the Afghanistan government in September last year which helped in the vaccination of 100,000 Afghan children in the provinces of Kandahar, Helmand, Urozgan, Zabul, Farah, Nangarhar, Kunar and Legman for the first time in the last five years.

Taliban there had provided security to health workers and had asked the people to bring their children for immunisation to the designated places.

“We are in the forefront of the polio vaccination campaign. We will accompany health workers in areas where people have so far been refusing vaccination,” promised Tehreek spokesman Khan.