BEIRUT, Jun 17 2008 (IPS) - Despite the new peace agreement in Doha, Lebanese are becoming increasingly polarised, with confrontation between groups affecting the population at every level. 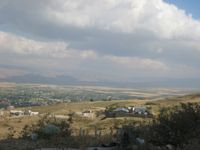 Lebanon's mounting tensions were triggered by the 2005 killing of Sunni former prime minister Rafik Hariri in a bomb blast in Beirut, allegedly at the hands of the Syrian regime. The country, home to 18 religious communities, was split into two main groups: a Western-Arab backed majority, and a pro Iranian-Syrian opposition. The conflict culminated in week-long fighting last month that left 67 dead.

The frail peace since the agreement in Doha, Qatar, on May 21, has not prevented altercations between majority and opposition supporters erupting in various regions. On May 28, a shootout between Shia opposition Hezbollah fighters and members of the Druze majority Progressive Socialist Party left one soldier dead in Aramoun, one of the suburbs of the capital.

In another incident, Imad Zaghloul was shot Jun. 6 by unidentified gunmen in the Bir Hassan southern area of Beirut. Early reports stated that the attackers wore parliament police uniforms, and pro-government factions quickly accused the opposition of encouraging the violence, because the Lebanese parliament is headed by Nabih Berri, leader of the Shia Amal movement.

On Jun. 8 and 9, violent combat erupted between Hezbollah and the majority Sunni Future Movement in the Bekaa villages Saadnayel and Taalabeya.

"In Lebanon's society every community has dormant attitudes towards one segment or another. These feelings are stirred in the event of a conflict and exacerbated by the political discourse and the media's biased reporting of events," says Dr. Nabil Dajani, sociologist at the American University of Beirut.

Friction between the Sunni and Shia communities was instigated by the assassination of Hariri, and relations between the two groups have been volatile ever since.

"Our neighbours and friends from the Shia community, with whom we have lived harmoniously for the past 30 years, did not side with us against the Syrians, and have been acting like occupants since," says Mohamad Moheidine, owner of a store located in Saadnayel. He was referring to the alignment of Hezbollah and Amal with Syria and their subsequent resignation from the government in objection to the international tribunal set up to bring Hariri's killers to justice.

The apparent peace of Bekaa valley, a lush tapestry of fields of grains and vines, is broken by violent words spoken on both sides of the divide. "We will do what we can to protect ourselves against them and put a stop to their arrogant behaviour," says Mohiedine, referring to Hezbollah supporters' alleged attempt to kidnap three Sunni youngsters last Saturday at one of the local cafés.

On a parallel street, Ali Diab, owner of a paint shop, gives a different recollection of the Jun. 8 and 9 events.

"A Shia driver from the Dandach family came under verbal attack from a group of Sunni youngsters, and retaliated by firing his Kalashnikov in the air. He was chased by a group of villagers who fired at his house. My house was also shot at, as it is the only Shia residence in this area."

The store owner says that although the rivalry initially stemmed from political differences, it has since taken a sectarian dimension. "I believe that Hezbollah is not at fault; on the contrary, it has asked supporters to be patient. We only retaliated when we felt that they (Sunni supporters of the Future Movement) were actually trying to kill us."

According to Dajani, Lebanese religious leaders and politicians have been fuelling sectarian sentiment instead of trying to build bridges among the various communities.

"Some villagers are selling their furniture or their wives' jewellery to buy weapons," says Mohiedine. "We are willing to die to protect ourselves and our land against those who want to rob us of it."