UNITED NATIONS, Jun 18 2008 (IPS) - A human rights group has published the first detailed list of juvenile offenders on Iran’s death row, finding that at least 114 children under the age of 18 are awaiting the ultimate penalty. 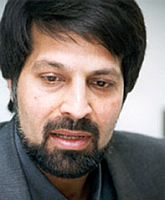 Emad Baghi is a leading authority on the issue of child executions in Iran. Credit: emadbaghi.com

The International Campaign for Human Rights in Iran says that two child offenders have already been executed this year, and notes that Iran’s judicial system is so opaque, it is unclear whether others on the list have already been put to death.

At least one of those awaiting execution, Ahmad Noorzehi, was just 12 years old at the time of his crime.

“Iran is the only country putting child offenders to death in great numbers,” Hadi Ghaemi, a spokesperson for the campaign, told IPS. “This barbaric practice is justified in the name of Islamic law, but many religious scholars have challenged it,” he added.

Launched on Wednesday, the list is the result of comprehensive research by prominent Iranian human rights defender Emad Baghi. It forms part of a book he has written called “Right to Life II”, which argues that such executions are not sanctioned by Islamic law as claimed by Iranian authorities.

Baghi’s book compiles numerous authoritative religious sources arguing for the abolition of executions of child offenders. Copies of it have been distributed to Iranian officials in the judiciary and parliament, as well as to human rights defenders and organisations inside Iran. However, Iranian censors have not permitted the book to be published.

The campaign obtained a copy of “Right to Life II”, which documents 177 death sentences for child offenders over the past decade. At least 34 executions have been carried out, another 114 are apparently pending, and the remaining offenders were pardoned.

“While the whole world is moving towards abolishing death penalty in general, Iran’s increasing number of executions of minors is shameful,” said Ghaemi. “They should immediately abolish it. There is much momentum in this direction both domestically and on the international front, and this is the time for Iran to act and bring its practices in line with its international commitments.”

In terms of total numbers, only China carries out more executions than Iran. On a per capita basis, Iran executes more people annually than any other country. Murder, rape, armed robbery, kidnapping and drug trafficking are all punishable by death in Iran.

Two major international human rights treaties – the Convention on the Rights of the Child and the International Covenant on Civil and Political Rights – forbid imposition of the death penalty for crimes committed under the age of 18. Iran has ratified both treaties.

Most of the child offenders on the list were convicted of murder. However, as Baghi’s research shows, many of the sentences appear to be based on dubious confessions extracted after torture and interrogations in which they were denied access to a lawyer. Courts routinely ignore evidence presented by defendants demonstrating that they acted in self-defence, says the campaign’s report.

“In every case we’ve looked into, there have been serious violations of Iranian law and procedure, often at more than one stage of investigation, trial, and sentencing,” said Clarisa Bencomo, a children’s rights researcher at Human Rights Watch’s Middle East and North Africa Division.

“I have no doubt that in many cases on this list there are children who would have been found innocent if they had adequate legal assistance and fair trials by properly trained juvenile court judges who rejected coerced confessions,” she told IPS.

The execution of minors in Iran will be one of the issues raised in a forthcoming report by U.N. Secretary-General Ban Ki-moon at the General Assembly meeting in September.

The Iranian government has not allowed the U.N. Human Rights Council’s special rapporteurs to enter Iran and investigate alleged abuses. But in a joint meeting with the Council in Geneva earlier this month, four human rights organisations from inside and outside the country provided evidence on major violations in areas such as the execution of minors.

Shirin Ebadi, the 2003 Noble Peace Prize Laureate, was one of the participants; she and others urged the Iranian government to cooperate with the U.N. investigators.

Human Rights Watch has followed some of the cases on the list, as well as several of the cases of juvenile offenders executed during the last several years.

“The Iranian lawyers and activists who collected this information should be applauded, as should all the lawyers, judges and activists in Iran working to end the use of the juvenile death penalty in Iran,” said Bencomo.

“But the new parliament should make it a priority to pass legislation bringing Iran into compliance with its legal obligation to end the juvenile death penalty, that legislation… should include a provision guaranteeing free legal assistance to all children charged with criminal offences,” she added.

“The head of the judiciary should order a stay of execution in all capital cases involving juvenile offenders pending further review, and trial judges should exclude coerced confessions from evidence,” Bencomo said. “Prosecutors should ask children charged with crimes about their treatment by police and investigate and prosecute police who commit abuses, and lawyers’ associations should organise a system to provide free legal aid to all children charged with capital offences.”

*Omid Memarian is World Peace Fellow at UC Berkeley’s Graduate School of Journalism and a regular contributor to IPS.