WOMEN-MEDIA: Conspicuous By Their Absence

ROME, Jun 6 2008 (IPS) - Observe any summit picture – you won't find many women. The mystery of female underrepresentation in the echelons of power persists: after so many decades of the feminist movement, why are women at the helm scarce? A look at the media sector may provide some answers. 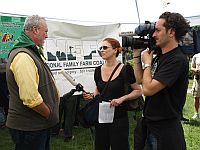 Heavy duty. Women are often the face, but rarely the boss behind the news. Credit: Sabina Zaccaro/IPS

"The media is a mirror on society so it needs to be a reflection of that society. If our newsrooms are male-dominated spaces, they will reflect a male-dominated world. That, for me, is not living true to our mission of creating non-racial (in the case of South Africa), non-biased, non-sexist societies," says Ferial Haffajee, the first woman editor of the South African Mail & Guardian.

Media organisations are the gatekeepers of much of what is known in the public sphere, while journalistic stories contribute to perpetuating stereotypes, or changing them. It is quite revealing, then, to find out who is in the kitchen cooking the news.

"The influence of women in journalism is one of the most central problem areas in feminist media research," acknowledges a recent report entitled "The Gender of Journalism", authored by researcher Monika Djerf-Pierre.

It is difficult to draw global conclusions about the role of women in media organisations, since studies are largely focused on specific countries, and deal mainly with western women or with how women are portrayed in stories as sources or topics. So let's have a look at some examples, even if fragmented.

Djerf-Pierre's study shows that even in a female-friendly nation such as Sweden, "journalism as a field has remained male-dominated". (Sweden ranks number one – or the country with the narrowest disparity – in the Global Gender Gap [GGG] published by the World Economic Forum).

A period of tokenism was followed by the upsurge of a critical mass of women who entered the newsrooms in the last 25 years. Today, almost half of Swedish journalists are women, she says in the study. However, three out of four leaders in the media industry are men.

Only in two sectors, public broadcasting and magazines, do women fill more than 40 percent of leadership positions. Djerf-Pierre explains that a general pattern – she calls it "gender logic" – persists: men typically cover the public sphere of politics, business, and power, speaking to male sources and assuming the mantle of objectivity; women tend to cover the private sphere, drawing on female sources and writing in a more intimate style.

According to a survey published in 2005 mentioned in her report, "many women journalists… feel that women are at a disadvantage when stories are assigned, but say at the same time that gender has no importance with respect to how a desk chief performs his or her job."

Similar patterns emerge in the U.S. (GGG rank 31), which is in a worse position regarding equality.

"Women have reached the proverbial glass ceiling in the media," proclaims the International Women's Media Foundation (IWMF) in its 2006-2007 report.

A study by the American Society of Newspaper Editors in 2006 showed that the number of women executives has stagnated in this sector. "The percentage of women in daily newsrooms increased slightly to 37.7 percent… 64.5 percent of all supervisors are men. They are also 58.5 percent of all copy editors, 60.3 percent of reporters and 72.6 percent of photographers," says the study.

"Part of the reason could be that women are frustrated with their progress. A 2002 study by the American Press Institute and the Pew Centre for Civic Journalism documented a brain drain among women who didn't anticipate moving up in their organisations and thought they might leave journalism," says the IWMF report.

The group Media Report to Women, a provider of information about how media depicts women, cites a 2006 study by the Atlantic, Harper's, The New York Times Magazine, The New Yorker and Vanity Fair, which found a 3 to1 ratio of male to female bylines.

And the American Journalist Survey, released in 2003 by Indiana University, showed that female journalists' median salary in 2001 was about 81 percent of men's salary of 46,758 dollars. The wage gap widened as journalists grew older.

The situation is analogous to other places. "Our network members report common types of sexist discrimination, such as wage inequality and unequal opportunity in reporting assignments" in different newsrooms around the world, IWMF Executive Director Jane Ransom told IPS.

In Spain (GGG rank 10), there are 1.22 women to each man at university, but in terms of leading roles, women are far from achieving equality, "even in the most 'feminised' sectors (of culture), such as literature," says a report about women and culture published recently by El Pais newspaper.

"In the media, in spite of the fact that 46 percent of journalists are female, women take up only 24 percent of managing positions," according to the paper, which quotes the Annual Report on the Journalistic Profession 2006.

The writer Laura Freixas attributes this gap to what she calls the "patriarchal ideology".

"Female presence among cultural agents is very marginal. How is this marginalisation perpetuated, when faculties are mainly female? Let's have a look at an example: an article about biography as a genre, published by a magazine (Letras Libres, January 2008). The text contains 60 names. Only two are feminine. Were there no female biographers or biographied in history? If there were, weren't they good enough for inclusion? And if they were, why weren't they included?"

"The important thing is not the answer to these questions, but that the author didn't even wonder why…," she concludes. "The absence of women among culture creators produces only contents that legitimise the absence of women [as subjects] and vice versa."

It is not enough that women flood universities, if the "patriarchal ideology" not only distorts our perceptions but also acts upon reality, argues Freixas.

There are even comparatively more women at university in Italy than in Spain, 1.35 per each man, according to the GGG report. However, women were only one-third of the journalists working in Italian newsrooms in 2006, and the situation hasn't changed much since 2002, researcher Marina Cosi, who works for the Italian National Press Federation (known as FNSI), told IPS.

The daily papers were in the worst position, with only 27 percent female journalists, while news agencies employ more women (35 percent). Women make up 37 percent of the journalists in national television, and 38 percent of spokespersons in public institutions.

There is no information, though, about how many of these women are top editors, directors, publishers and media owners. IPS approached Stampa Romana, a national association of registered journalists, and women's organisations, without success.

*This is the first of a two-part report on women in media, written in cooperation with Aldo Ciummo in Rome. Miren Gutierrez is IPS Editor in Chief.