TORONTO, Jul 30 2008 (IPS) - A rollercoaster ride of spurned treaties, efforts to fund new weapons and the expansion of potential targets for nuclear strikes under the George W. Bush administration to include Iran and North Korea may be drawing to a close after eight years. 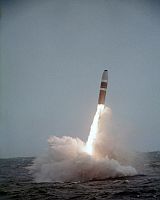 Wade Boese, research director at the Washington-based Arms Control Association, told IPS he detects a new tone in the current U.S. presidential race following the publication of calls in the Wall Street Journal more than a year ago by former U.S. secretaries of states Henry Kissinger and George Schultz, former defence secretary William Perry and former senator Sam Nunn for a world free of nuclear weapons.

“Today, we deploy thousands of nuclear warheads,” Republican presidential candidate John McCain said in May. “It is my hope to move as rapidly as possible to a significantly smaller force.”

“There is not much to look at right now [in the candidates’ positions]. They all have said the right things in the sense that we need to reduce our nuclear forces, we need to show leadership,” Boese said, adding that Barack Obama, the Democratic nominee, appears willing to take a more aggressive reduction approach.

“I think it would be a profound mistake for us to use nuclear weapons in any circumstance,” Obama said a year ago, with a pause, “involving civilians.” Then he quickly added, “Let me scratch that. There’s been no discussion of nuclear weapons. That’s not on the table.”

Boese is concerned that other bigger issues like U.S. military involvement in Iraq could “distract” the next U.S. administration from seriously tackling some of the complexities behind nuclear disarmament.

Another arms control watcher, David Culp, foresees a substantial change in U.S. policy whoever is elected president in November. “There is pretty broad bipartisan frustration with the Bush administration policy,” he told IPS. “The feeling is that they went way too far, that it’s damaged U.S. standing in the world, that it has undermined our anti-proliferation efforts.”

The devil is in the details on the amount of change that will occur in any U.S. administration on the matter of disarmament, said Culp, legislative representative for the Quaker group Friends Committee on National Legislation. The ultimate decision will lie with the secretary of defence appointed by the elected president, and especially the expertise he or she brings along to set a specific direction. “The cabinet officials end up being the people that drive this policy,” Culp said.

Both Obama and McCain are on the record as supporting the Nuclear Nonproliferation Treaty, slated to be reviewed at an international conference in New York City in 2010, and increased U.S. funding for the International Atomic Energy Agency, which is responsible for the treaty’s implementation, stated Culp.

Nonetheless, Culp pointed to substantial differences between the presidential candidates, and their respective parties. “I know [the Democrats] are looking at very sharp reductions in the strategic arsenal,” he said.

Both Obama and McCain have parted company with the Bush administration’s determination to allow the Strategic Arms Reduction Treaty, a verification process oriented toward U.S./Russia nuclear arms control, to expire in December 2009, the Quaker spokesperson reported. The Russians apparently would like to negotiate a shrinking of the respective U.S. and Russian nuclear arsenals, which includes the more than 1,000 nuclear warheads they and the U.S. have aimed at each other.

While the Democrats are looking at cuts of missile stockpiles by half, McCain and the Republicans are not talking about doing anything similar or specific beyond letting the treaty continue, stated Culp. Indeed, the Republican presidential contender would leave the decision regarding the size of the U.S. nuclear arsenal up to the U.S. military command in terms of “what numbers we need to go to,” he noted. “That is not very encouraging to me. Almost every [arms control] agreement that we have gotten has been driven by the political leadership [in the White House].”

Obama has also promised to make the Comprehensive Nuclear Test Ban Treaty (CTBT) a priority. Among those who voted to defeat its ratification in the U.S. Senate in 1999 was McCain, who has since cautiously stated only that he will take a second look at the issue, Culp said.

Furthermore, McCain who has sat for a long time on the Senate Armed Services Committee, has supported the controversial U.S. missile defence system, including the deployment of missiles in Poland and a radar station in the Czech Republic. Here, Obama is more “sceptical”, commented Culp. “I think there is some chance that the missile base in Poland and Czech Republic would be cancelled [if the Democrats are elected].”

Unclear, however, from either campaign is whether the Bush administration’s expanded targeting plans for nuclear strikes against Iran, North Korea and Syria will be revisited, stated Culp. Encouraging for him is that the U.S. Congress is undertaking a review of the U.S. nuclear posture after rejecting proposals for the financing of new nuclear weapons under the current administration, including a controversial nuclear “bunker buster” bomb that would have been aimed at Iran’s underground uranium enrichment facilities.

Martin Butcher, a policy researcher at the British-based Acronym Institute for Disarmament Diplomacy, emphasises the relevance of the U.S. nuclear posture in the wake of continued bellicose talk in U.S. and Israeli political circles directed against Iran, which is accused of enriching uranium to create nuclear bombs – notwithstanding U.S. intelligence reports to the contrary.

Within NATO, he says, unresolved differences pit the European countries, which want to limit first-strike capability to major conflicts with states already armed with nuclear weapons like Russia and China, against the U.S., which has sought to broaden the targets to include enemy states with other weapons of mass destruction, particularly chemical, biological and powerful conventional arms.

Expanded first-use, he says, was a “last resort” under U.S. President Bill Clinton, but his successor, George. W. Bush, made it “the central plank” of military strategy, Butcher said.

However, military analyst Lowell Schwartz at the RAND Institute says that the U.S. and NATO nuclear military posture should not be taken literally since it is essentially used to discourage threats without actually going to war.

“Even the Bush administration, when they talk about striking first, it is generally in a kind of conventional sense. This is not about using nuclear weapons first,” he said.