Q&A: ‘Speculation Is Causing An Oil and Food Price Bubble’ 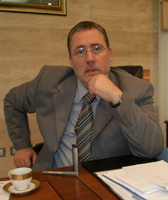 In an interview with IPS correspondent Baher Kamal, al-Dardari, who is a graduate of the London School of Economics and regarded as one of the foremost economic experts in the Middle East, spoke about the national and international causes and effects of the present global crisis.

IPS: What speculative bubbles are you talking about?

ABDULLAH AL-DARDARI: In the 1990s, the U.S. created the information technology bubble, and the world’s financial markets were heavily involved in it.

This situation, which lasted until the year 2000, coincided with the globalisation process, and therefore had enormous global repercussions, shown by the great crisis in the Asian markets in 1997.

By 2001, U.S. economic policy had created another bubble – that of real estate mortgages – in which money was transformed into shares and financial documents that were traded on a huge scale between the big international markets, creating a global crisis.

These mortgage debts circulated and were bought and sold on a global scale, a process in which the big investment portfolios and large international banks were involved. The result was an enormous crash, causing a shock much more serious than the previous bubble.

IPS: What do those two speculative situations have to do with the present crisis?

Thus, thanks to the oil bubble, large companies are recouping the losses they sustained during the mortgage bubble. The thing is, there is no logical economic explanation for current oil prices, because right now supply exceeds demand.

Some say that now there are emerging economies like China and India [that are affecting the rising prices], but in actual fact, these economies have been growing at a rate of nearly 10 percent a year for a decade.

Others attribute it to war, to the occupation of Iraq… But in fact, we are in the presence of a new stock market bubble, the purpose of which is to recoup what was lost when the other bubbles burst.

IPS: What are your views on the idea that energy prices are shooting up to hurt the economies of Europe and Japan, and now also China and India, among others? At least, that is what used to happen every time the other large economies made solid gains…

AD: I do not subscribe to conspiracy theories, but I am convinced that speculators work in a premeditated fashion. Oil speculators plan ahead, they do not improvise.

But your question leads to considering the struggle between two global trends: one which wants to restore a multi-polar economic and political system, and another which seeks to oppose it.

We see that Russia has returned to the forefront of the world economy, as have China, India and the Asian countries in general. The Arab countries of the Persian Gulf, too, with their sovereign wealth funds, for example, are now among the first rank in the world economy.

This is also the case in Latin America, with Brazil, Argentina and Chile, to cite a few examples. Even Africa – for all its immense problems – is approaching the global economic scenario.

In a word, 70 percent of global gross national product (GNP) is produced outside of the group of seven most industrialised countries in the world. This is a fact, not a possibility or an option.

I do not believe that any sensible economist in the U.S. has any interest in blocking this multilateral development. It provides the U.S. with a source of cheap goods, a market for its products, and more potential clients for U.S. Treasury bonds. Can you imagine what would happen if no one bought U.S. Treasury bonds?

IPS: What role do biofuels play in the current speculative scenario? What is the situation in Syria?

AD: Production of biofuels is not envisaged in Syria. We don’t even think about it as a possibility. The question of biological energy is simply a crime against humanity.

IPS: President Bashar al-Assad talks of a positive climate in the region. He will be making a state visit to France in mid-July, and – with Turkish mediation – talks between Syria and Israel will soon be entering a fourth round. What do the Golan Heights mean to Syria?

AD: Even if it were utterly arid soil, the Golan is ours, it is our right to recover it and it must be returned to Syria.

Having said that, from the economic point of view the Golan has 14 percent of our water resources. It could also increase our agricultural gross domestic product by 10 percent.

To continue with the economic aspects, we must remember the enormous economic burden that the drastic displacement of Syrians from the Golan Heights represents for the country’s infrastructure. There are close to half a million Syrians displaced within their own country.

In addition, because of the occupation of the Golan (by Israel, since 1967), Syria’s tourism industry is also losing out.

IPS: Half a million people displaced from the Golan, hundreds of thousands of Palestinian refugees since 1948, Lebanese refugees after the civil war, and 1.5 million Iraqis displaced by the military occupation of that country… Apart from the human tragedy, what economic burden do displaced people represent for Syria, with its barely 20 million people?

AD: To be precise, Syria has continued to shelter half a million Palestinians since 1948, as well as all the others you mention. Altogether, this costs the Syrian economy between 1.5 and two billion dollars a year, let alone the increased level of inflation, which reached 14.5 percent at the end of 2007.

AD: Our economy grew by 6.6 percent in 2007. The goal is to reach seven percent in 2010, but we still don’t know what the growth rate this year will be, as we are waiting for the results of the agricultural sector, which contributes 25 percent of our GNP. We had a severe drought last year and this year.

IPS: Since the year 2000, Syria has been implementing what it calls a “new economy”…

AD: That is what we call our social market economy. We are opening up to the market economy, but with social goals. It has been an arduous process, as there were enormous challenges to be overcome in changing from a centralised economy to one that is open to the market.

We had to reform everything, from mentalities, to laws and regulations, to the administrative structure which was characterised by entrenched bureaucracy.

In barely four years we have passed nearly 1,000 laws on liberalisation of trade, investments, competition, dismantling monopolies, authorising private banking and insurance, opening a stock market, training key personnel; in fact an entire legal framework for the economic life of the country.

To sum up, we are creating the institutions for the new economy. One example of what we have achieved is that our growth rate has risen from 0.5 percent in 2000, to 6.6 percent in 2007.

But none of these figures have any value unless we achieve the social goals of the new economy.

IPS: The U.S. included Syria in the so-called “axis of evil”. To what extent have Washington’s sanctions affected your country’s economy?

AD: The sanctions came at the most critical time of the transformation of the economy. They affected the pace of the reform, the willingness of other countries to invest in Syria, and our capacity to acquire technology. Although only the U.S. imposed sanctions, there were some banks – including Arab banks – and business sectors that chose to distance themselves from Syria.

In spite of that, we carried on with our economic reforms. One interesting statistic is that Syrian exports to the U.S. increased by more than 30 percent!

IPS: What are the pillars of the Syrian economy?

AD: Let me make it clear at once that Syria is not a service economy, but one based on agriculture, which represents 25 percent of GNP; industry, which contributes 12 percent; and recently trade and tourism, which represent 16 percent.

Other emerging sectors which are growing rapidly are banking and finance, housing and construction, and state services such as water, health, education and electricity.

As for oil, we produce some 380,000 barrels per day, which cover 50 percent of our needs, so we continue to be a net importer.