RATANAKIRI, Cambodia, Jul 10 2008 (IPS) - In thick forest in the north-east Cambodian province of Ratanakiri, a team of lawyers uses a global positioning satellite handset to mark the location of traditional spirit forests and gravesites belonging to local Jarai villagers. 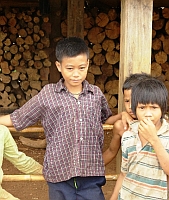 The stark contrast between old and new, the latest technology and ancient beliefs, illustrates the changes sweeping this remote part of the Cambodia, mainly populated by Indigenous people.

It also marks the latest round in an ongoing dispute many believe typifies the epidemic of land grabbing sweeping the country and its impact on indigenous people.

The lawyers are from the Phnom Penh-based Community Legal Education Centre (CLEC). Their ethnic Jarai clients are from Kong Yu village, about 42 kilometres out of Ban Lung, Ratanakiri’s capital.

The air is hot and alive with dragonflies as Roman Phil, a Kong Yu elder, directs the lawyers towards a traditional Jarai burial site, a dense patch of forest strewn with ceramic urns. The lawyers mark the spot on their GPS handset.

The location of the burial site and other areas of spiritual significance will be used as evidence in a case lodged by Kong Yu villagers in the provincial court against the company that they say has cheated them out of land.

The company, the Progressive Farmers Association, has already cleared much of the land, including graveyards and spirit forests, and planted it with rubber trees, a popular cash crop in Cambodia.

"We would never destroy spirit forest. It is too important for our ancestors and for us," says Phil. "They destroyed some of these and did not even give us a chance to remove the remains."

Now the Kong Yu people are alarmed at recent suggestions by local authorities that the company wants even more of their land. "If the company comes to clear more land we will protest," maintains Phil. "We are determined to protect our land."

According to a memorandum from Legal Aid of Cambodia, the dispute originated in March 2004, when the then village chief and other local officials asked Kong Yu villagers to sell a portion of their land to high-ranking official in Phnom Penh.

The villagers rejected the offer, saying that it was their ancestral land essential to the preservation of their culture.

The officials returned about a month later, according to the January 2007 memorandum, and informed the villagers they needed the land for Prime Minister Hun Sen’s disabled soldiers. They threatened to simply take it without compensation as it belonged to the government, the document says.

Believing they had little choice, villagers agreed to donate 50 hectares.

The authorities returned several more times and asked families to put their thumbprints on documents – most of the Kong Yu people do not speak or read Khmer – which they said were needed to facilitate the deal.

In one instance, they brought alcohol to celebrate the land donation. Once the villagers were drunk, they asked them to affix their thumbprints to additional documents and also to do the same on behalf of villagers absent from the party, according to the Legal Aid of Cambodia document.

The buyer turned out to be Keat Kolney, wife of a prominent official in the Ministry of Land Management, Urban Planning and Construction, and sister of Keat Chhon, Cambodia’s finance minister.

Kolney only visited the village once, in August 2007, together with officials from Phnom Penh and local commune government, when she distributed gifts and envelopes of cash.

The villagers were asked once again to thumbprint documents in Khmer before they could receive the gifts. Those who did so were allowed to keep gifts, but the village chief immediately collected the envelopes after distribution.

The next day the chief distributed 400 US dollars to villages and a further sum to widowed families and children. Media reports at the time claimed the chief and members of the local government received payments for facilitating the deal.

Approximately one month later, the company informed the villagers they were taking 500 hectares of land.

Amid village protests, bulldozers belonging to the Progressive Farmers’ Association, which Kolney chairs, started clearing the area soon after.

"They have already destroyed a lot of our crops when they cleared, including cashew, cassava and banana trees," says Phil.

The villagers’ traditional shifting cultivation practice is also now under pressure, explains Phil. "As the land becomes smaller, it becomes more difficult to do this practice."

Lawyers representing the Kong Yu people filed a lawsuit with the Ratanakiri provincial court in January 2007, saying the sale is illegal.

"I feel very confident we have a strong case," states Am Sokha, coordinator of CLEC’s Public Interest Legal Advocacy Project. "We have the legal arguments and a lot of evidence the people did not voluntarily sell their land, but were cheated."

There are only 46 families residing in Kong Yu, though the final contract in the disputed sale bears 101 thumbprints.

Lawyers representing the villagers maintain that many of the thumbprints on document can only belong to people who do not live in Kong Yu, including local officials with no legal entitlement to the land.

In response to the court action, Kong Yu elders say the local government has engaged in of a campaign of intimidation.

Roman Phil says he has been threatened with arrest and jail. Lawyers representing the villagers have been prevented on several occasions from accessing their clients.

A document presented to the Ratanakiri court by Kolney’s lawyer in October 2007 says the land was bought legally through a broker who told her that the Kong Yu people had wanted to sell their land since 2001. The document states the villagers decided to sell their land because "they are facing livelihood difficulties (and) they are in debt". It also said they feared people from a neighbouring village would grab their land.

It also says Kolney knew nothing about the claims made by officials that villagers needed to give up 50 hectares of their land for Hun Sen’s disabled soldiers.

In response to doubts about the validity of the thumbprints on the purported sale document, Kolney’s lawyer recently told the English-language ‘Cambodia Daily’ that some of the villagers had thumbprinted the document twice to get more money.

The Konh Yu case is merely one of many ongoing and emerging land disputes taking place across the province, according to NGOs and local indigenous groups.

In Chrung, another Jarai community 30 minutes’ drive from Kong Yu, local elders tell how they were nearly cheated out of their land.

Although some of the details get confused in the translation from Jarai to Khmer to English, it was probably 2001 when speculators connected to business figures in Phnom Penh came to Chrung and told the local people they wanted to develop their village.

The local people were told they would be hired as part of the deal to work on the land. They were asked to put their thumbprints on documents in return for a kilo of salt per thumbprint, although some were also reportedly given money.

"We only gave our thumbprint because we thought the deal was to develop our village," says one elder. "Then we were told we had signed a contract to sell our land." After several years of legal proceedings, Cambodia’s then monarch King Norodom Sihanouk intervened and the villagers got their land back.

As they speak, Chrung elders clutch official documents wrapped in plastic and pass around old colour photographs showing them during an audience with King Sihanouk at his Phnom Penh palace.

Despite their victory, many Chrung villagers have subsequently sold their land, say NGOs familiar with the case.

Cambodian law specifies no time frame within which the Kong Yu court case must be tried. Some doubt the case will ever get to a courtroom.

Meanwhile, the Kong Yu villagers say they have plans to go to Phnom Penh and perhaps petition King Sihanouk for a resolution to the case.

(*This story was written for the Imaging Our Mekong Programme coordinated by IPS Asia-Pacific.)