SOMALIA: Fighting for an Education

MOGADISHU, Jul 1 2008 (IPS) - "I like to study, even though there is fighting everywhere in Mogadishu," says Bashir Gedi, a 15-year-old student in the Somalian capital. "Education is more important for me because if I can get an education, then I can help rebuild my country." 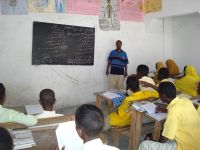 Somalia has been without effective central government for almost two decades. Most state institutions have vanished in large parts of the country – schools are no exception.

In the northeast and northwest of Somalia, where there has been relative stability, schools have been operating almost as normal; it is in the southern and central regions of the country – including the capital – that the education system has collapsed.

According to the United Nations, nearly half of the two million residents of the Somali capital have fled their homes since February 2007 when Somali government forces backed by Ethiopian troops toppled an Islamist administration in south and central Somalia, setting off a conflict that has killed 12, 500 mostly civilians, wounded 25,000 others and forced hundreds of thousands from their homes.

Most schools in south Somalia have either been deserted or turned into army bases by the Ethiopian and Somali government troops. Those soldiers have on many occasions raided schools in the capital, accusing them of being madrasas (Islamic religious schools) that educate and produce militant insurgents.

Abdurrahman Hussein is the principal of Al-Khaliil Primary School, one of the couple of schools still open in Wardigley district in Mogadishu. He says schools have not only suffered the effects of the long civil war in Somali, but have increasingly become a target in the past year and half.

"In some quarters, schools have been linked with the idea that they produce terrorists – this is very far from the truth," said Hussein. "We share the difficulties of living or working in a war zone, but we have the added difficulty of being singled out as the soft target whenever things happen."

Teachers have been singled out for harassment and arrest as they struggle to provide an education to the young in Somalia.

Mohamed Gashan is a secondary school teacher. He spent a week in detention after he was arrested by Somali security forces on suspicion of having links to Islamist fighters. He was later released for lack of evidence.

"They manhandled me roughly, forced me to lie down and blindfolded me and threw me into the back of a truck," said Gashan. "I was in detention for a week before I was set free because they could not prove I was guilty."

Schools themselves have also been targeted.

"The (Somali government) forces entered our school during final examinations, and forcibly searched students and teachers – the whole school was searched for weapons," Abdinasir Abdullahi, head teacher of Iqra Annamudajiah school in Mogadishu told IPS, "We have really been harassed and terrorized by the experience."

The fact that nothing has yet been found to link the schools with any of the insurgent groups fighting the Somali government forces and their Ethiopian allies has not protected them from further raids.

In June, a roadside bomb went off close to another school in Mogadishu, killing a senior police commander and wounding five people including two school children. Forces of the Somali transitional government raided the school shortly afterwards, forced the students and the teachers out and burned part of the school.

"Classes continue even in the midst of gunfire around the school because we do not want to let ignorance and darkness to scare us away from knowledge and light," Abdullahi said.

That is the kind of determination that drives parents, teachers and students alike in their desire to continue education even in the worst hours of adversity. A desire that can prove costly in the face of the indiscriminate targeting of civilians by the very institutions that are meant to protect them.

Despite the difficulties, local communities have pooled their resources to rebuild schools and send their children to be educated.

In the central Somali town of El Bur for example, community leaders collected contributions from local business people and the general public, as well as calling on Somalis in the Diaspora to pay for the renovation of the town's only school. Some of the better-educated people of the town then volunteered to teach the students who have been trickling in since enrolment began early last year.

A number of such small-scale projects have restarted schools in the capital and elsewhere. Even in the newly-formed camps for internally displaced people on the outskirts of the Somali capital, makeshift schools have been created alongside the flimsy shelters. Students sit on the bare ground with long boards as books and improvised ink and small sharpened sticks as their pens so as to get a semblance of education.

Many teachers volunteer their services while doing other jobs to sustain themselves. Students and teachers alike brave gunfire, roadside bombs, stray bullets, and shells, and the frequent street closures that – freeze movement for hours in Mogadishu – to get to the schools that are still open.

"We believe that it is a must for our children to be educated, whatever the risk," says Farah Nur, a father of seven school-age children.