BEIJING, Aug 20 2008 (IPS) - As China piles up gold medals, even the host nation has been watching in bewilderment. Despite popular expectations that China’s athletes would shine on home turf, the medal bonanza has surprised usually skeptical Chinese people. 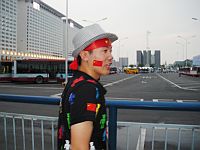 "We were not supposed to be winning," says security guard Tang Guorong, shaking his head in disbelief. "We haven’t got the national strength yet and the physiques of our athletes are not as good as those of the Americans. The most I had hoped for China was coming second after the United States.’’

But China has pushed its sporting boundaries to the limit, bagging 45 golds by the end of Wednesday and closing up on its closest rival, the U.S., in the overall race 83-81. With every gold taken home and with each raising of the Chinese flag at the award ceremonies, the euphoria of Chinese masses has grown too.

The Olympic fatigue that had gripped many capital residents – irked by traffic restrictions and security regulations before the opening of the games – is gone. On public buses and in bars, in restaurants and offices the talk of the town has been China’s rise to sporting prowess. Slowly but steadily expectations are building up and now even the most disbelieving are allowing themselves to dream of China becoming number one.

"Look at all those medals in sports that China had never excelled in before," says Steven Yang, an advertising sales agent. "We have won golds in swimming, in archery, fencing and even yachting! Surely, it must mean an overall advancement in sports and not just a temporary leap!"

The U.S. topped the table in golds and total medals won at the past three Olympics. But in the gold count alone, China has been steadily catching up. In Athens, the two were separated by only four gold medals, with the U.S. bagging a total of 36.

An editorial in the national newspaper China Daily attributed the gold rush to China’s "open and pluralistic social ambience", created by the last 30 years of economic reforms.

"An increasing number of gold medals for Chinese athletes in an increasingly wider range of sports is because more Chinese have developed an interest in the sports that they did not have chances to take part in before," it said.

Chinese Olympic officials have tried to downplay the significance of the gold medals bonanza. "It is a very good performance but still far from an outstanding one," says Wei Jizhong, member of the Beijing Olympic Committee. "If China wants to be a real sport power, we need sustained breakthroughs in the sports that we don’t consider as our traditional strength".

Even the shock withdrawal of star hurdler Liu Xiang – China’s best hope at winning a gold in athletics – has not managed to dampen the country’s sweet anticipation of Olympic victory. Revelations of the enormous pressure that Liu had suffered in the run-up to the games has made Chinese athletes’ march towards victory even more awesome in the eyes of many.

"I do feel for him," says Guo Tian, a young woman attending one of the 110-metre hurdles heats this week. "His setback has made me realise that competing for your country is much more difficult than just defending your personal record. The pressure seems to be unbearable.''

Liu shocked his fans by pulling out of the games Monday because of a foot injury. The China Daily described the effect of his surprise exit as one that "shattered billions of people’s dreams".

The 25-year-old became a national hero after winning China’s first Olympic gold in athletics with a victory in the 110m hurdles at the 2004 Athens games. The past four years of advertising hype and national admiration have transformed him into China’s most beloved sport icon.

So it came as a shock when Liu admitted to the massive pressure he had experienced as a sporting hero. "As I won more and more titles, and as more and more people gave me attention and support, I endured more and more pressure," he said in a letter released to his fans on the website of China’s athletic team this week.

"I can’t easily go out and party with friends like people of my age, and I feel the expectations from the whole country at all times".

Several weeks before the Olympic games began, Liu Xiang’s coach had given another glimpse of the pressure on athletes from above. "Officials from the State General Administration of Sport once told us that if Liu cannot win another gold medal in Beijing, all of his previous achievements will become meaningless," he told the China Daily.

China’s sports establishment is often criticised for its merciless training routines and mass mobilisation methods, which see talented children separated from their parents at an early age and trained in elite sports schools with the goal of defending China’s sports titles.

But Wei Jizhong says the pain Chinese athletes go through is necessary. "China is not yet at a stage of its development that it can afford to train all children in sports and we must select those that are the best at representing the country.’’

Given its enormous human pool, China’s rise to sporting glory is perhaps not that surprising after all. "If China wins over the U.S., it would be because of the bigger population," reckons Tang, the guard.