LUSAKA, Aug 19 2008 (IPS) - Australian mining giant Equinox Minerals is developing the Lumwana Copper Mine (LCM) to take advantage of strong prices for copper on the international market. When it opens later this year, the mine will be the largest in Africa, but critics say Zambia's share of the profits of minerals is smaller than it should be. 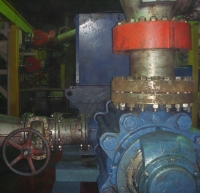 Carbon capture storage equipment like this can reduce emissions from mines by up to 70 percent Credit: Danstan Kaunda/IPS

This open-pit mine in north-western Zambia, some 45 kilometres from the border with Democratic Republic of Congo, is expected to bring in large amounts of foreign investment. The Lumwana project is expected to generate over 1,500 jobs during the construction phase and about 1,055 direct jobs in its full operation phase starting in December.

Zambia holds Africa’s biggest copper reserves. In 2006, the country produced 515,618 metric tonnes of copper – up by 1.5 percent from previous year.

The Zambian government recently announced an upward adjustment of the tax regime for mining firms. They say the taxes are designed to capture a greater share of windfall profits from the mining companies operating in the country.

Announcing the new regime in April, Ng’andu Maganda, Minister of Finance and National Planning, said that the development agreement between the Zambia government and mining companies operating in the country is lopsided.

"These measures are competitive, reasonable and balanced. So with this (new tax), the government will be able to improve education and health services and make investments that will create more jobs in other sectors of the economic and improve livelihoods of Zambian citizen," Maganda said.

The mineral royalty tax levied on copper ore produced has been increased from 0.6 percent to 3 percent, while the tax on corporate profits has jumped from 25 to 30 percent. Maganda said the government is expected to gain an estimated $415 million in additional revenue in 2008 alone.

But Harry Michael, chief operation officer for the Lumwana Copper Mine (LCM), told IPS that government needs to consider the impact of this on new taxes regime on investors like Lumwana mine.

"I do not speak on behalf of government or the Chamber of Mines in Zambia. But coupled with the increasing fuel prices, the operations of mines will be affected. As for the Lumwana mine, we have not started operations, but there are already changes to the development agreements. I hope we will stick to the old agreement with government on taxes."

Michael conceded that the mine's owners planned to recuperate the investment they are putting in before the majority of Zambians would start seeing meaningful benefits from the project.

"We have put in the largest investment in this project, in excess of $800 million, to develop this mine. The total investment is expected to come up to over $1 billion. So you should understand that we are a business," Michael told IPS.

Some mining companies are considering taking legal action to prevent changes to the development agreements they have already signed.

The government is not merely reviewing profit-sharing with the mining sector. It is also tightening protection of the environmental laws. The mining town of Kabwe, is the most polluted places on earth, where decades of unregulated copper smelting have left a toxic legacy: children tested in 2006 had levels of lead in their blood averaging four to eight times higher than the maximum considered safe. The government-owned mine principally responsible was closed in 1994, three years before new legislation governing pollution standards was passed.

Three years ago, more than 50 mine workers died in an explosion at the privately-owned mine.

There are some encouraging signs of enforcement: just last year a manganese mine owned by Chiman Manufacturing Limited was closed down for exceeding allowable air pollution limits which affected nearby townships in Kabwe; the mine was also sanctioned for failing to provide sufficient personal protection for its staff.

On uranium production, government is reviewing the regulations and framework for licensing under the Mines and Minerals Act.

According to an Environment Impact Assessment (EIA), obtained from the Environmental Council of Zambia in Lusaka, the Lumwana Copper Mine will be required to develop a tailing storage facility and waste rock dumps to protect surface and underground water from uranium and other heavy metal pollution.

The EIA also outlines that the mining company should comply with the air pollutions law under the Zambian law.

"We have put up a very good management team that is committed to build and develop low carbon emission technology at the mine plant. This includes a chemical storage shed and a twin tower laboratory," Chishimba explains to IPS.

This modern technology at the plant could reduce carbon dioxide and other toxic gas emissions into the atmosphere by 70 percent compared to other plants without carbon capture measures.