HARARE, Aug 29 2008 (IPS) - In 2006, there was shared concern among donors and women’s organisations over the fragmented approaches to gender and women’s empowerment programmes in Zimbabwe. 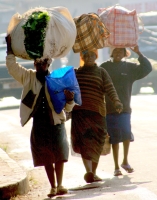 Vegetable vendors like these are likely to be empowered by the Basket Fund. Credit: Ephraim Nsingo/IPS

“This resulted in lack of clarity on what was happening, who was doing what, where, with whom, with what/whose support and what was being achieved,” says Eunice Njovana, head of the United Nations Development Fund for Women (UNIFEM) in Zimbabwe.

“This led to duplication of efforts, inefficiencies and ineffectiveness in programming. The lack of a co-coordinated approach to programming also made it difficult to identify gaps and priorities in the sector, to assess the strategic value of the different efforts and to ensure that the different programmes performed to expected standards.”

In an attempt to solve this anomaly, the UNIFEM office in Zimbabwe convened a meeting of donors and civil society organisations to identify ways of harmonising activities and funding of women’s organisations. The meeting was held in the capital city Harare in the run up to the Women’s Day commemorations in March 2007.

The study resulted in the establishment of a Basket Fund, which was to be implemented by UNIFEM in partnership with the Women’s Coalition of Zimbabwe (WcoZ) – an umbrella organisation representing women’s organisations in Zimbabwe, beginning on Aug. 1. The Basket Fund was to provide “a common financing mechanism to address essential needs and sustain gender equality support within development planning”.

But as August draws to an end, the Basket Fund – sponsored to the tune of 1,035,000 euros by the European Commission and an additional along 50,000 pounds from DfID for a six-month planning and inception period – is not yet being implemented. According to officials in a non-governmental organisation (NGO) close to the project, it may not be implemented at all this year.

The reason: the implementers are “still building capacity and putting systems in place”. The erratic political situation in Zimbabwe has also had a significant negative impact on the fund.

“While UNIFEM has had previous fund management experience, as a UN arm, the same cannot be said of the Women’s Coalition of Zimbabwe (WcoZ),” explained Rutendo Hadebe, the deputy chairperson. Hadebe is the former director of the Women in Politics Support Unit (WiPSU) – an NGO that educates and provides technical support to women politicians.

“This new role means setting up systems, transformation of the (Women’s) Coalition from just a coordinator of the women’s organisation to playing a pivotal role. This also means that key personnel has to be has to be hired… that which has fund management experience”. Fund managers would be recruited mostly from consultants already working in the UN system in Zimbabwe and civil society organisations.

The situation, noted Hadebe, was compounded by the political and economic crisis.

“Although Aug. 1 was set as the beginning of the implementation date, the whole programme and inception phase envisaged late 2007 and beginning of 2008 had not anticipated a rather unpredictable and stretched election period,” she noted.

At the beginning of June, the government banned the fieldwork of all NGOs. This, said Hadebe, crippled the consultative processes.

“In addition the resulting political violence and victimisation saw women’s organisations having to take up the role of offering humanitarian support to hundreds of women victims, as opposed to continuing the inception phase which had become impossible under the then prevailing conditions.”

The government of Zimbabwe also played an active role in the project through the Ministry of Women’s Affairs, Gender and Community Development, led by Oppah Muchinguri. Muchinguri was recently dropped from her position as minister, and this, said gender activists, was likely to “impact negatively on our activities as she pursued these issues with a passion”. During her tenure, Muchinguri spearheaded the enactment of the National Gender Policy, which provided the framework for the study.

As a result of the challenges, beneficiaries of the programme are yet to be finalised.

“We have yet to identify the grant recipients because we are still in the process of developing the project document and the systems, tools and procedures for Basket Fund management,” said Njovana.

“What we can say though is that the fund will specifically target multiple sectors as per the identified thematic areas. It will seek to support a broad range of issues in the thematic areas as well as involvement of a broad range of players among civil society organizations. As this is a national programme, it is expected that there will be wide geographical coverage of the basket fund.”

In an interview with IPS, Emma Mahlunge, the director of Kunzwana Women’s Association – which brings together 240 clubs representing 3000 mostly rural women – said although she was “aware of such a programme”, they had not been consulted.

“This is a good initiative, it gives organisations with shared objectives to work together, identify problems together, thus using minimum funds on a wide range of projects. But I do not know why we still haven’t been contacted. Our organisation has the widest representation of rural women,” said Mahlunge.

But Njovana said they were not neglecting any organisations, saying they were targeting mostly “marginalised groups, specifically rural women, and women living with disability”.

“Special attempts will be made to involve the smaller, erstwhile neglected/marginalised organisations/groups working in remote and underprivileged communities to ensure that they receive some grants. Examples of such groups are HIV positive women, women informal sector workers, migrant women, indigenous communities, women survivors of gender based violence and women with disabilities,” said Njovana.

Given all these challenges, will the programme take off any soon, if at all?

“In this respect the Inception Phase, that is, project design, strategy and tools for implementation, continues to take place but is expected to be concluded in the next two or three months with implementation phase set to begin thereafter,” said Hadebe.

According to Njovana, although mostly women’s organisations would benefit, men would also benefit.

“Consistent with the recommendation of the Gender Scoping Study that preceded the development of the National Gender Equality and Women’s Empowerment Programme, the basket fund will also reach out to men’s organisations for example Padare/Enkundleni Men’s Forum on Gender to promote a systematic and structured approach to men’s involvement and contribution to gender equality and women’s empowerment,” she added.

Officials from the Ministry of Women’s Affairs Gender and Community Development were reluctant to comment on the issue. A new minister is expected when President Robert Mugabe announces a new Cabinet.