ICELAND: Filling Up on Hydrogen

REYKJAVIK, Aug 28 2008 (IPS) - Earlier this year, the Icelandic whale-watching boat Elding was fitted with a hydrogen-powered generator that fuels its lighting system, electric equipment and navigation machinery. It is the first of its kind in the world. 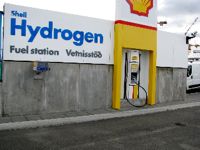 A filling station for the future. Credit: Lowana Veal

The hydrogen generator replaces an oil-based generator. It is particularly appropriate for the whale-watching ship as the generator is silent, which means that when whales are spotted and the ship's main engines are switched off, there is no background rumble of a diesel generator.

The project is part of Sustainable Marine and Road Transport – Hydrogen in Iceland, or SMART-H2, as it is more commonly called. SMART-H2, which was started in March 2007, is run by the company Icelandic New Energy and the University of Iceland, and will run for three years.

Besides the boat, the car rental firm Hertz has introduced three hydrogen-powered Toyota Prius cars that are rented out. The cars are part of Hertz's effort to improve its environmental performance.

Asked whether the cars cost more to hire, Sveinn Sigmarsson, fleet manager for Hertz, says: "Yes, the cars are very expensive – they cost about the same as a Land Cruiser jeep. The reason is that the cars have to be custom-made.

"The cars are primarily rented by tourists who are extremely ecologically-minded, although they are also very popular with journalists. The drawback is that there is currently only one hydrogen filling station in the country, which means that customers can only travel 160 km before needing to refuel."

The lack of refuelling stations is one of the main obstacles faced by those promoting the use of hydrogen-fuelled cars. But Minister for Industry Ossur Skarphedinsson has said that he intends to engage municipalities and companies in setting up filling stations all over Iceland where drivers can fill up on methane, hydrogen, ethanol or methanol, as well as petrol or diesel. Facilities for recharging electric cars will also be available at these stations.

Many environmentalists are critical of hydrogen power, saying that its production consumes vast amounts of energy which in turn produces the greenhouse gas carbon dioxide along the way. While this may be true of hydrogen power in some countries, in Iceland hydrogen power is produced in an eco-friendly way.

"In Iceland, either geothermal energy or hydroelectric power is used to fuel the production of hydrogen fuel. But many countries have ample amounts of wind energy or solar power that can be used for powering hydrogen fuel production," says Jon Bjorn Skulason, general manager for Icelandic New Energy.

"I know that there are criticisms from some environmentalists about the production of hydrogen from fuels such as natural gas, but because the efficiency of hydrogen as a fuel is approximately 40 percent rather than the 18-25 percent for petrol or diesel, hydrogen still works out as a better option."

Hydrogen fuel is produced by electrolysis of water into its elements, hydrogen and oxygen. No greenhouse gases are emitted when it is burned.

Since the hydrogen project began in Reykjavik in 1999, a number of students and other researchers have worked on the issue. "Altogether, there have been nine student projects over the last four years. There are currently two students, but we expect the number to increase in the near future," says Skulason.

Iceland has always been in the vanguard of hydrogen technology. It was the first country to use hydrogen-fuelled buses (three) as part of the Reykjavik transport system. The hydrogen fuelling station, which was opened in 2003 when the buses came into operation, is now open to the public – again a first. The hydrogen buses were running until 2007, a year longer than originally planned. The trial was originally meant to last three years.

"But it is important to make clear that this is not government policy," says Maria Maack, environmental manager for the company. "They (the government) support various tests and demonstrations and expect a well-informed market to pick the most viable choice for locally made fuel types. And although we test the cars, if they are not satisfactory on our terms, we may send them back. We do not have the financial resources to test more than this number of cars."

Meanwhile, some car manufacturers – notably Honda, Toyota, Ford and Daimler – are making progress in hydrogen-powered cars for commercial use. Although full commercial production is not expected until at least 2015, series production may start within a few years.

The main setbacks to be overcome are related to storage of the fuel and methods of increasing driving range. Honda and Daimler have both managed to produce a prototype that will run for about 430 kilometres before refuelling, while Toyota says its new model could be driven 830 kilometres without refuelling.

Hydrogen can also be used to fuel motorbikes. Sveinn Hrafnsson, an Icelandic car mechanic living in London, has modified his Harley-Davidson motorcycle to run on hydrogen. According to a report in the Icelandic newspaper Morgunbladid, the bike is both more fuel-efficient and more powerful.