LEBANON: Cracks Widen Under the Patchwork

BEIRUT, Aug 5 2008 (IPS) - The assassination of former prime minister Rafik Hariri Feb. 14 2005 generated a popular outcry in Lebanon, which led to the massive protest in Martyrs’ Square a month later on Mar. 14. The demonstration against Syrian occupation, which was accused in the killing, marked a turning point in Lebanese politics and the birth of the March 14 movement. 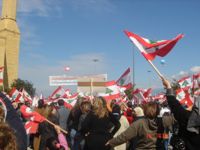 More than three years later, the movement symbolised by the red and white colours of the Lebanese flag has failed to build on the momentum of uniting people in the cause of nation building.

The essence of the movement was an alliance of rival warlords and political factions. Many Lebanese were amazed by the sight of Walid Joumblat (leader of the Druze Progressive Socialist Party), Amin Gemayel (Christian Kataeb party), Samir Geagea (Christian Lebanese Forces), and Saad Hariri (son of Rafik Hariri and head of the Sunni Future movement) standing side by side.

A few months after the demonstration, and leading up to the 2005 elections, Joumblat, Hariri and Geagea struck a deal with Syrian allies, the Shia Amal and Hezbollah parties, sidestepping General Michel Aoun, head of the Christian party the Free Patriotic Movement (FPM). Aoun had then recently returned from exile.

The alliance between March 14 and Hezbollah and Amal did not last long. A major political crisis erupted as soon as the March 14 demand for an international tribunal to investigate the assassination of Hariri was brought up. The crisis, lasting nearly two years, began with a public sit-in protest in Beirut organised by the opposition March 8 movement – which included Hezbollah, Amal, the FPM and the Syrian Social Nationalist Party (SSNP). It ended with week-long fighting between the two groups in May that resulted in 67 deaths. On May 21, peace was brokered by Qatar between the March 14 and March 8 movements, leading to formation of a unity government.

“March 14 has certainly made the most concessions, as witnessed in the government composition, where the opposition has been able to secure as many key ministries for its allies as March 14, which has parliamentary majority,” says Carlos Edde, head of National Block party. Edde has left March 14 but says he still adheres to its underlining principles.

“March 14 is based on the principles of sovereignty, democracy and self-determination for Lebanon,” says Michael Karam, editor-in-chief of Now Lebanon, an online media close to March 14. “In light of what we have had to contend with in the last three years, whether the assassinations (mainly targeting March 14 members), the sit-in, sabotage of the presidential election (which was postponed for more than six months), the May 7 coup d’état (by Hezbollah that led to the fighting) and the current continuous obstruction process, the fact that March 14 is still able to operate is a miracle.”

Not everyone thinks it is operating very well. “The cohabitation between the state and Hezbollah’s armed organisation is rendering the March 14 mission of nation building impossible,” says Fares Soaid, head of the March 14 secretariat. Hezbollah is the only Lebanese faction allowed its own arsenal under the resistance banner.

“Hezbollah’s weapons are tied to a regional strategy, as witnessed in the recent speeches of Iranian officials stressing that stability in Lebanon, Palestine and Iraq can only be achieved through an international agreement on Iran’s nuclear dossier,” says Soaid. Edde believes that the March 14 movement has been going downhill because it relied on a tactical approach without developing long-term policy. Soaid says March 14’s first mistake was to believe that Hezbollah’s decision to start a war with Israel in 2006 was purely Lebanese. “We need to focus our slogans and approach on the problem of Hezbollah’s weapons,” he says.

“March 14’s diversity is reflective of the country’s,” says Karam. As with Lebanon itself, that may be its greatest weakness, and strength. For the latter to prevail, the movement must strengthen its cohesion, defend a clearly delineated programme and start campaigning, says Karam.