KARACHI, Aug 31 2008 (IPS) - As Pakistan appears to lurch from one political crisis to another, there may be a silver lining in the army continuing to keep its distance from politics and the political leadership affirming the democratic process, despite the setbacks. 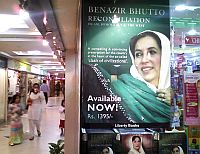 In her posthumously published book 'Reconciliation' Benazir argued that democracy was the answer to many of Pakistan's woes. Credit: Beena Sarwar/IPS

The return to electoral politics has been a rocky, roller-coaster ride, plunging to its greatest low with the murder of former prime minister Benazir Bhutto on Dec. 27. Her controversial widower Asif Ali Zardari – brought in as party co-chair along with their college-going son Bilawal Bhutto Zardari – has managed to stay on top of things, blithely making and breaking promises and keeping people guessing.

The decision of the ruling Pakistan People’s Party (PPP) to nominate Zardari as president after the resignation on Aug. 18 of the party’s enemy number one, Pervez Musharraf, led to more speculations and uncertainty. Musharraf’s departure ended several weeks of high tension and raised expectations that the coalition government of the PPP and the Pakistan Muslim League-Nawaz (PML-N), led by former prime minister Nawaz Sharif, would move towards tackling the various crises besetting Pakistan.

Galloping food inflation has doubled household expenditures over the past few months. The judges’ issue continues to fester – Musharraf had suspended virtually the entire superior judiciary on Nov. 3 last year when he imposed a state of emergency and many have still not been reinstated. Ongoing conflicts in the north-west continue to claim lives while the western province of Balochistan simmers. Perpetual problems like unemployment, law and order, education, health, gender violence and lack of clean drinking water are sidelined.

Zardari initially denied being interested in the presidency, hinting that the next president might be a woman. This led to speculations about his sister, Feryal Talpur, an elected member of the National Assembly, but she too denied being interested in the position. Less than a week later, on Aug. 22, the PPP announced Zardari’s nomination. A couple of days later he accepted, nominating Talpur as his covering candidate.

Speculation that he would withdraw at the last minute ended when Talpur withdrew, leaving Zardari all to set to take over as president after the forthcoming elections on Sep. 6.

The party stands firmly by him but many PPP supporters have voiced opposition. "After Benazir’s death, I supported all of Zardari’s decisions although I don’t care much for him. But I can’t support this presidential nomination," said retired social worker Shahida Haroon in Karachi who has always voted for the PPP. "I feel totally disgusted and let down."

Some have a more resigned attitude. "They’re all alike, what difference does it make who is president?" shrugged Jamal, a professional driver from Peshawar who has lived in Karachi for 40 years. He keeps himself well-informed about the ins and outs of politics but does not support any political party.

"They aren’t parties but dynasties," he commented, talking with IPS, "They would be parties if they allowed ordinary people like us to rise to the top. But they don’t. It is always a son, or a brother or some other relative who takes over."

Zardari is also largely perceived as corrupt although no cases have been proved against him in court. A joke doing the rounds is a plea to tell Zardari that 58-2-b does not mean 58.2 billion dollars. The reference is to Article 58-2-b inserted into the Constitution by the military dictator Gen. Zia-ul-Haq (1977-88) which empowers the president of Pakistan to dissolve the assemblies and dismiss the prime minister.

During the 1990s, presidents used 58-2-b to topple three governments. In his second tenure as prime minister, Nawaz Sharif got the offending article struck down. However, it was not the president but the army chief Gen. Musharraf who overthrew Sharif’s government. In October 1999 Musharraf assumed position as the country’s ‘chief executive’ and then became president, restoring Article 58-2-b.

The alliance between the PPP and the PML-N dates back to the historic ‘Charter of Democracy’ that Bhutto and Sharif co-signed in London in May 2006, ending decades of political rivalry. An underlying principle of the charter was to keep the army out of politics.

After the elections this year, the PPP and PML-N formed a coalition government. They were committed to restoring the judges and removing Article 58-2-b. Their coalition, already strained due to Zardari’s foot-dragging over the ‘judges’ issue’, fell apart when Zardari’s presidential candidature was announced as Sharif maintained that his party had not been taken into confidence.

There was a fresh bout of mud-slinging in the media against Zardari, including the old allegations of corruption and a new one, mental instability, as revealed in the medical records that Zardari’s lawyers used to excuse him from court appearances.

But some analysts argue against the negative focus on Zardari and are in favour of allowing the process to work, given the long periods of military rule in Pakistan and the oft-interrupted, all too brief periods of democracy.

"Mr. Zardari has the political right as well as the legal right to occupy the presidency," commented Farrukh Saleem, who heads the Centre for Research and Security Studies, an independent think tank in Islamabad. "Does he have the moral right? Let him who has not sinned throw the first stone. Let’s talk of due electoral processes and what they have delivered in other countries. Let’s put processes and a system of government in place. Once it is strong it will itself throw the bad apples out."

Mazhar Abbas, secretary-general of the Pakistan Federal Union of Journalists, pointed out that despite the split between the PPP and PML-N their leaderships have demonstrated political maturity and acceptance of each other, asking their workers not to badmouth the other party.

In a letter to the editor asking journalists to refrain from giving the ‘establishment’ any excuse for army intervention, while acknowledging Zardari’s flaws and blunders, he asked, "What will happen if Mr. Zardari becomes president? It will be easy to make him and the PPP accountable to the people. They may learn some lessons… Let democracy take roots and let military stay out of politics."

As the unpredictable Zardari appears set to become Pakistan’s next president, it remains to be seen how he will use his powers. He has surprised critics in the past. In the present scenario, Pakistan’s best hope may be for him to surprise his detractors again.