Q&A: Women Do Most, With Least Assistance

Interview with Lennart Båge, President of the International Fund for Agricultural Development

ROME, Aug 13 2008 (IPS) - The international debate on effective aid that is shaped by developing countries' needs rather than donors' priorities will be resumed when ministers from over 100 countries, and members of development agencies, donor organisations and civil society gather for the Third High-Level Forum on Aid Effectiveness in Accra Sep. 2-4. 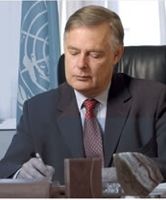 The Accra Forum is set to review progress in implementation of the 2005 Paris Declaration on aid effectiveness, and to agree a new agenda to increase effectiveness of global development efforts. The three-year process since the Paris agreement has been "solid but slow," Lennart Båge, president of the International Fund for Agricultural Development (IFAD) tells IPS correspondent Sabina Zaccaro in an interview.

"The Paris Declaration has helped shape international aid and development over the past three years; it has proved extremely important in bringing together the needs of developing countries to have greater ownership, with the needs of donors for better accountability on the ground," he says. "But the pace of progress remains too slow. Now it is time for developing countries and donors to take responsibility for accelerating action."

IPS: Civil society groups are concerned about the absence of concrete time-bound commitments in the Accra agenda. How can this meeting be prevented from resulting in another vague promise? What are the concrete steps it should take? LB: Civil society is holding its own event in Accra ahead of the High Level Forum. At the forum itself, 80 members of Civil Society organisations have been invited to take part in the debates. The Advisory Group on Civil Society (AG-CS) has been actively involved, and has launched an extensive consultation. In addition, the role of civil society in achieving aid effectiveness is the topic of one of the roundtables. The conclusions from the roundtable discussions should factor into the finding and conclusions that come out of the high level forum, and should help result in more concrete steps.

IPS: Are the concerns of rural poor adequately heard by the international donor community? LB: The bigger question is whether the concerns of poor rural people are being heard by their governments. Paris is a partnership process. One of the reasons we, at IFAD, are striving so hard for ownership and country-led development is so that the voices of poor rural people do get heard by governments and that these concerns are part of development actions.

But donors too need to hear what rural poor people have to say. And to hear, you need ears. To improve our hearing at IFAD, we created the Farmers' Forum – an ongoing, bottom-up process of consultation and dialogue between small farmers, rural producers' organisations, IFAD and governments. It meets every two years and is focused on rural development and poverty reduction.

At the country level, IFAD has a planning and monitoring instrument – the country strategic opportunities programmes – it uses to align its programme of work with the operational activities of other donors and national development strategies, as well as for learning and accountability within respective countries.

IPS: Although the U.N. Secretary-General has recently stressed the need to invest up to 20 billion dollars a year in agriculture, the proportion of official development assistance to agriculture is only a fraction of what it was in 1979. How could the Accra Agenda for Action – which is expected to result from the Accra meeting – lead to more effective investment in reducing rural poverty and hunger, and help smallholder farmers play an active role in addressing the current crisis? LB: I fully agree with the Secretary-General that there is an urgent need for a step change in the level of aid to agriculture. There is tremendous potential for smallholder farmers to increase production and thereby to help to feed their own families and to increase the supply of food.

AAA (Accra Agenda for Action) can lead to more effective investments by helping to ensure that governments have plans and budgets for investment in rural agriculture that focus on delivering results, and by focusing donor funds on supporting such plans in a predictable and well coordinated way. Sustainable agriculture development yields measurable results. But to increase production, poor farmers need access to microfinance to pay for fertiliser, seeds and tools, they need access to technology to boost production, and they need clear title to the land on which they farm.

The AAA aims to ensure that all stakeholders are adequately represented in decision-making processes – including smallholder farmers and their organisations. The recognition in the AAA that country ownership includes ownership by poor people themselves is especially important in this context.

IPS: Women are hardest hit by the effects of the current crisis. Is the gender dimension integrated in food security policies in terms of financial resources? Is there a specific budget line dedicated to women within the food security programmes? LB: Women play key roles in agricultural societies. In most developing countries, they perform much of the agricultural work and produce most of the worlds' food crops. In parts of sub-Saharan Africa, women contribute about 80 percent of the total food production; their contribution is about 65 percent in Asia and 45 percent in Latin America. In rural communities in particular, women play a central role in ensuring food security; when women have access to income they tend to spend a higher percentage on food for the family, while men tend to spend more on themselves. When there is less money for food, women go hungry.

Despite women's critical roles, they have less access to the assets, services and knowledge that would enable them to perform these roles more effectively. Women's role in agriculture remains largely unrecognised in policy and resource allocation; only a very small proportion of ODA for agriculture reaches women. Sustainable agricultural development must take into account the role and needs of women.

IFAD has always focused on smallholder agriculture. Since women are often the majority of smallholder farmers and producers of food crops, they have been major beneficiaries of IFAD projects. The same is true for IFAD's microfinance projects. Unless the productivity of women farmers and women food producers is sharply increased, we will be unable to increase food security or protect our environment.

IPS: What is IFAD doing to improve its own aid and development effectiveness? LB: Under our ambitious 'Action Plan to improve IFAD's development effectiveness', IFAD has implemented major reforms to improve the quality, relevance and effectiveness of its work and to ensure that the investments we make really do deliver results. These reforms have delivered radical changes to the development of country strategies to make them more results-focused and more responsive to the requirements of the countries in which we work, and to the way in which IFAD-financed projects are designed and supervised. They also include new approaches to innovation, knowledge management, partnerships and improvements in IFAD's management of its own key resource – its people.

According to the latest Survey on Monitoring the Paris Declaration, undertaken by OECD-DAC (the Development Action Committee of the Organisation for Economic Cooperation and Development, a grouping of 30 wealthy nations), IFAD is performing well on several of the commitments in the declaration, including use of country systems. We are committed to doing better still, and I am confident that the further implementation and consolidation of our reforms will enable us to do so.