VANCOUVER, Aug 22 2008 (IPS) - The 29th summer Olympics cast renewed light on China's treatment of ethnic minorities in Tibet, and as the games wind down, a similar, if less pronounced set of controversies will follow the torch to Canada when Vancouver hosts the 2010 winter games. 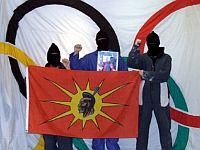 Many indigenous nations in the Canadian province of British Columbia fear the 2010 games will further erode their traditional territory, opening large areas of unceded land to tourism and infrastructure development, damaging hunting and fishing grounds.

If native land claims and other grievances aren't addressed soon, the leader of the British Columbia Union of Indian Chiefs says aboriginals will turn to marches, rallies and lawsuits to draw international attention to poverty, underdevelopment and a lack of social services in native communities.

"If these processes [ongoing land negotiations with government] fail, you are going to see a lot of political activity; a manifestation of the frustrations in many native communities," Grand Chief Stewart Phillip told IPS.

Some 40 percent of Canadian aboriginal children live in poverty, mould contaminates almost half of First Nations households, and close to 100 aboriginal communities lack safe drinking water, according to a 2006 report compiled by a variety of advocacy groups titled "Oh Canada! Too Many Children in Poverty for Too Long."

As the Vancouver games draw nearer, "it is likely there will be tense confrontations between aboriginal communities and the state," says Dr. Wenran Jiang, director of the China Institute at the University of Alberta.

"There are some comparisons [between Canada and China/Tibet]. We are looking at two disadvantaged groups being dominated by the major larger group," Dr. Jiang told IPS. "The difference in Canada is that aboriginal communities were all but wiped out; it was truly an act of genocide."

The main difference between Tibet and Canada, which makes comparisons difficult, is that Canada is a democracy and China is not.

While Grand Chief Phillip doesn't think Vancouver will look like the Tibetan capital Lhasa, where ethnic Tibetans rioted earlier this year against what they see as an occupation by politically dominant Han Chinese, some aboriginal activists are willing to push the envelope of state-sanctioned protest.

In March 2007, the Native Warrior Society, a militant aboriginal organisation, donned black balaclavas and cut down the Olympic flag from Vancouver's city hall. "We stand in solidarity with all those fighting the destruction caused by the 2010 Olympic Games," said the society in a statement released to the media which concluded with the slogan: "No Olympics on Stolen Native Land."

Grand Chief Phillip is careful to note that four aboriginal nations have entered into partnerships with VANOC, the Vancouver Olympic organising committee, to collaborate on hosting the games.

Some non-native Canadians feel aboriginals receive more than their fair share of government money but spend it unwisely. In this respect, attitudes of non-natives in Canada mirror their Han Chinese counterparts. "Financial assistance [from the Chinese government] has poured into Tibet, [but] the reality is that Tibetans have been disadvantaged and so-called development has brought a mixture of feelings: most people get better living standards but they are concerned about their status and religious freedom," Dr. Jiang told IPS.

Vancouver Olympic organisers and corporate executives, both native and non-native, hope the games will attract foreign investment and new property developments to British Columbia, which bills itself as the "most beautiful place on earth". A high Canadian dollar and other factors have all but destroyed the region's logging industry, once the province's economic life blood. While most aboriginals favour increased economic development, many fear new hotels, highways and ski resorts will destroy traditional economic activities.

"The natural ecological balance will be disrupted and animal habitat will be lost as a result of huge increases in population and urban infrastructure," writes Taiaiake Alfred, director of the Indigenous Governance Program at the University of Victoria. "This will make it nearly impossible for people to use their lands for hunting, fishing and ceremonial purposes."

In May 2006, police arrested two dozen native and non-native protesters for blockading expansion work on the Sea-to-Sky Highway, a 600-million-dollar piece of Olympic infrastructure designed to ferry athletes and equipment from Vancouver to the ski resort of Whistler. Among the arrestees was 73-year old Squamish elder Harriet Nahanee who died during the prison term stemming from the protest.

Dr. Jiang, Canada's leading China expert, considers the 2010 games "a good opportunity to realise that our aboriginal policies need a better understanding and a better means of helping that entire group who is really lagging behind."

Tibetans likely believed the same thing prior to 2008 but international attention to their plight and the Chinese occupation did little to change conditions on the ground. It's doubtful their Olympic dreams have been realised. Activists here hope history won't repeat itself in 2010.