GAROUA, Sep 4 2008 (IPS) - Mrs Adjoumi Hamidou is the President. One of three surviving widows of Ali Hamidou, she heads Akoldiningnal, a collective that runs a multi-cereal mill at Gashiga village, 15 kilometres from the capital of Cameroon’s North Province, Garoua. 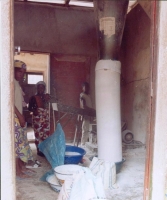 Projects like this cereal mill are threatened by bureaucratic bottlenecks. Credit: Tamfu Hanson/IPS

Akoldiningal is a 15-member Common Initiative Group (CIG) which started a cereal mill with a loan of $4,400 from the Programme for the Amelioration of Rural Family Incomes (PARFAR), a five-year joint project by the African Development Bank and the Cameroon government. Akoldiningal today runs three additional mills.

“We don’t only offer credit, we ensure that they effectively use the money they borrow. That is why our programme includes literacy training, gender awareness, accounting and much more,” reveals Foudama, national coordinator of PARFAR.

“We are all happy today thanks to the loan. It is from this project that I now sponsor seven children in school; from primary to the university level,” says Hamidou. In a region where cereals are the staple food, an average of 150 households grind their corn or millet at the mill every day, earning the group about 15,000 CFA (a little under $35); a significant daily intake in a country where 2005 figures from UNDP show 50 percent of the population survive on less than two dollars a day.

Ironically, Hamidou’s group, which has fully repaid the initial loan, cannot borrow more money because the microfinance institutions (MFIs) running the credit scheme are sitting on huge sums supposed to be paid back to PARFAR for continuous lending to the community. MFIs are the direct providers of funds to PARFAR’s beneficiaries.

“Loan reimbursement rate from the MFI is 45 percent as against 80 percent from the beneficiaries which means that loans cannot continue to flow as we want,” complains Yatahad Viche, North Province’s chief field officer for the project. The MFIs are accused of failing to deposit the money repaid to them into PARFAR accounts immediately, instead investing it elsewhere.

This situation is compounded by conflicts over issues of sovereignty and protocol and other bureaucratic bottlenecks on the government side. There is also the interference of numerous ministries in the project leading to delays and non-compliance with datelines

“Because of these, the project started almost a year late following the signing of an agreement between the government and ADB. By the time we started receiving the money, its value had already depreciated vis-à-vis the CFA. So you can understand our problems,” says Viche. Out of the project’s total budget of $3.5 million, little of the government’s agreed contribution of 2.8 percent has come in.

Out of a population of over 4.5 million in the project area, women constitute 51 percent of an estimated 3,000 beneficiaries of the project.

Worro Iabbo village depended on an old well dug by the Germans way back in 1945 until PARFAR came to its assistance with a borehole which now supplies clean water to the over 3,000 inhabitants of the village.

Boubakari Souaibou is chairman of Woru Iabbo’s borehole management committee. He told IPS that the well has brought a lot of relief to the village.

“The number of children with stomach disorders and other minor ailments we used to have in this village has reduced tremendously. Without this borehole I can’t imagine what the situation would have been today… but God has his ways own of intervening in situations,” Boubakari says.

PARFAR has supported the establishment of 151 wells, boreholes, 57 warehouses, 160 latrines. Project funds have helped set up two centres where cereals are ground into flour. And in collaboration with Cameroon’s National Institute of Agricultural Research, PARFAR has also trained 282 agents who popularise improved seeds and seedlings to farmers.

Twelve “women promotion centres” where women can learn basic business skills, literacy and computing and get health tips have also been built.

Nearly $900,000 has been distributed to CIGs, associations and individuals.

By the end of 2009, PARFAR will stop giving out new loans but the programme’s managers insist that it will leave a lasting impact on a vulnerable population. The repaid money will be used to sustain existing projects.

“I think the seed production centres, warehouses, and women promotion centres will constitute the hallmarks of this project with all its institutional and management insufficiencies in spite of ourselves… “says Foudama.

Officials are training community leaders to take over from PARFAR officials in coaching and assisting the population. And while resources remain scarce, a spirit of collective endeavour may be a lasting legacy.

In Worro Iabbo, where a population of 3,000 is putting pressure on the single borehole PARFAR funds provided, the well’s managers are working out strategies to acquire another borehole.

“We are appealing to the population to chip in coins as they fetch water to enable us carry out minor repairs and eventually acquire another borehole since we have to deposit CFA 200,000 ($440) as the village contribution,” explains Boubakari.