DEVELOPMENT-WORLD: What Is So Fair About Fair Trade?

PARIS, Sep 15 2008 (IPS) - Fair trade is held up as promoting fair prices for producers and guaranteeing social and environmental standards. These ideas are neither new nor controversial. But the recent boom in fair trade has drawn attention as standards and models multiply while authentication mechanisms lag behind. 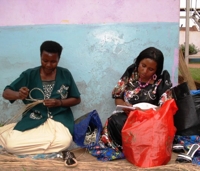 Artisans du Monde (‘‘Artisans of the World’’), a federation of 170 French fair trade outlets, estimates that Europe accounts for 60 percent of the fair trade market. In 2000, it reckons, one in 10 French consumers had heard of fair or equitable trade.

According to the French Platform for Fair Trade (Plate-Forme pour le Commerce Équitable, or PFCE), a collective of 39 organisations, the sector’s European turnover amounted to 1.25 billion euros in 2006, and fair trade sales have jumped by 20 percent every year since 2000.

At the other end of the chain, Artisans du Monde estimates that fair trade benefits 1.5 million small producers, the vast majority of whom are from developing countries. But what makes fair trade so fair to them?

Most fair trade organisations, whether buyers, importers, distributors or certifiers, operate under a self-imposed charter. Respecting a number of criteria will earn producers the right to use a network’s label and grant their product access to a fair trade distributor’s shelves.

But charters are as diverse as operators. Umbrella organisations such as the International Fair Trade Association, which claims 300 members, have a hard time unifying operational standards.

For Julie Maisonhaute, coordinator of the PFCE, trade is fair when it abides by three principles: paying a fair price for the product, assisting producers’ communities and advocating a more equitable form of international trade.

‘‘A fair price is a price which allows artisans and farmers to make a decent living from their work,’’ says Maisonhaute. Fair trade buyers and importers thus commit to paying a fixed price, regardless of the product’s current price on often volatile world markets.

According to the PFCE, producers who sell to fair trade operators earn 20 to 30 percent more than their product would normally fetch on the market.

Some critics argue that guaranteeing a minimum price is useless if buyers do not ensure the purchase of a certain volume every year.

Although PFCE buyers do not guarantee volumes to be purchased, they commit to buying over a period of time from the same producers. ‘‘It doesn’t work if it’s a one-shot thing, if we place a single order and reconsider everything next year,’’ Maisonhaute believes.

Part of the price is paid in advance: ‘‘Importers commit to pre-paying a part of their order, so that small producers have something to live on during the year of production,’’ she adds.

This also helps covering the costs of adjusting production to the importers’ standards of quality. The process is sometimes long and costly but necessary for importers to be able to sell their products in the West.

The PFCE’s second principle is to assist producers by helping them organise their community. ‘‘Fair trade seeks to work in priority with producers who are organised into farmers’ cooperatives, artisans’ unions and even private companies, as long as their employees have a say in governance,’’ Maisonhaute explains.

‘‘We also help them getting organised by bringing lone producers into such structures.’’

Finally, the PFCE insists on a more political aspect: ‘‘Our members pledge to advocate this different conception of international trade to consumers, institutions and elected officials. Otherwise this is only a business,’’ she argues.

Minga, the other major fair trade network in France, also insists on the political side of fair trade. ‘‘Transparency is of the essence. If you can’t prove to the public and the media that it’s fair, then it’s not,’’ says Michel Besson, Minga’s president.

Minga differs from PFCE by insisting on ‘‘North to North’’ trade within developed countries. It promotes ‘‘local solidarity partnerships between producers and consumers’’ which bypass major distribution chains and supermarkets.

It also advocates fairness of the entire supply chain and does not apply its charter exclusively to the production phase. ‘‘There is no such thing as fair trade yet because it’s a constant struggle to make the entire chain fair,’’ Besson admits.

‘‘For instance, most goods are shipped and we insist on transporters guaranteeing their sailors decent social conditions in line with the International Labour Organisation’s guidelines,’’ Besson explains.

‘‘We also pay attention to the environmental impact of transporting goods. What is the benefit of buying a fair trade tomato in France, if it comes from, say, Poland and burns a litre of diesel for each unit?’’ Besson asks.

But, whatever the definitions, the charters and the organisations’ role in the chain, both the PFCE and Minga admit that certification is the weakest link in ensuring that trade is indeed fair.

Both networks rely on self-evaluation. There is no independent verification that producers do in fact abide by a network’s charter and principles.

In order to join Minga and have its products sold by the association’s outlets, a producer must fill in a questionnaire with about 400 questions.

‘‘We also encourage a participatory system of verification where a member organisation visits another and evaluates economic, social and environmental practices,’’ says Besson.

For Maisonhaute, it is unthinkable to systematically verify production standards on the ground in developing countries: ‘‘Given the number of producers and the distances to cover, the cost of travelling to each location would be unbearable.’’

This allows the Adam Smith Institute, a British think tank that promotes free trade and is one of fair trade’s harshest critics, to denounce what it sees as a marketing initiative rather than a new model for economic justice.

‘‘Just 10 percent of the premium consumers pay for fair trade actually goes to the producer. Retailers pocket the rest,’’ the Institute claims in a report titled ‘‘Unfair Trade’’.

Trying to cut the debate short, fair trade operators in France called on public authorities to lay down a set of standards acceptable to all in 2005.

But the proposed norms never made it into law as the different networks have not, so far, agreed on a definition of ‘‘fair trade’’.