LEBANON: At the Palestinian Camp, Bombing Is a Way of Life

BEIRUT, Sep 29 2008 (IPS) - A bomb blast at the Ain el-Helweh Palestinian refugee camp as this IPS correspondent was visiting, comes as yet another reminder of the precarious peace in these places. 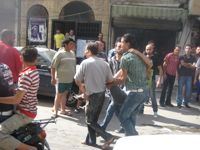 An injured man being helped after the bombing at the Ain el-Helweh camp. Credit: Mona Alami

Leading into Ain el-Helweh, on the outskirts of the southern city Sidon, this correspondent saw a large Israeli jeep strategically parked at a roundabout, a constant reminder to the camp’s 70,000 residents of their 60-year conflict with the neighbouring Jewish state.

The vegetable market shaded from the sun by large pieces of cloth was bustling with activity. The market is a few metres from the camp’s entrance, a dark alleyway. Residents scurried along the road, gathering groceries for Iftar meals (the breaking of the day-long Ramadan fast).

The seeming calm was short-lived. At about 2.30 in the afternoon a powerful explosion shook the neighbourhood. It occurred in Ain el-Helweh’s Tawarek area, where the Islamic Mujahid movement and other Islamic factions are headquartered.

The sound of the blast echoed in the rundown white building of the Nour mosque, where IPS was waiting to meet Sheikh Jamal el-Khattab, leader of Islamic Mujahid who preaches daily to the crowds. An intense bright light flared for a moment before fading out. It was followed by the sound of glass shattering, and then the screams of crowds.

Fighters dressed in fatigues and black T-shirts suddenly appeared out of thin air, as if conjured by the explosion. They emerged from their places of hiding, dark rooms located around the large staircase connecting the mosque to the upper floors where the offices of Sheikh Jamal are located. Their faces covered in black ski masks, they quickly took positions around the mosque.

People flocked to the area, watching the frightening events unfold. One man, drenched in blood, helped an injured civilian on the balcony of the neighbouring mosque. “This is not right, this is not right!” he screamed. “Why do we have to die at the hands of our brothers?”

The blast killed one person and injured five.

IPS toured the camp a few hours before the bombing. “There is a certain balance of forces in the camp, with power divided between Fatah (a branch of the Palestinian Liberation Organisation) and various other Islamic factions,” said Hassan, a fruit seller, a few minutes before the explosion.

One of his patrons, a woman in a brown veil, intervened. “Balance of power or not, nothing seems to be ending the violence plaguing the camp.” She was referring to the Sep. 15 killing of Issam Bikai, a member of the Jund al-Sham faction. The killing was followed by violent clashes involving use of machine-guns and rocket-propelled grenades.

Jund al-Sham is an Islamic faction financed by Hezbollah, which was supposedly disbanded last year by other Palestinian movements. According to Hajj Maher Oueid, head of Ansar Allah (God’s Partisans), it has been regrouping in the last few months due to the assassination of Bikai, allegedly by a Fatah member.

Mounir Maqdah, head of the camp’s Fatah branch, denied allegations that the killing of the Jund al-Sham member was politically motivated. “Individual problems are taking a political dimension,” he said, referring to the dissension between the Bikai and Saadi families (Mohamad Saadi’s son was allegedly involved in the Bikai shooting, and was killed the next day). “When you have so many mostly unemployed people crammed in one square kilometre, what do you expect?”

One source underlined that there were no more than 40 Jund al-Sham fighters in Ain el-Helweh, but that other radical Islamic military factions – mainly Ansar Allah, Osbat el-Ansar, Hamas and the Islamic Moujahid movement – are comprised of between 100 and 200 fighters each. The total number of armed fighters from the various factions could not, however, be confirmed by IPS.

With so many weapons at hand, life in Ain el-Helweh has become for most a constant battle for survival. “We try to keep to ourselves and stay in when clashes occur,” said Oum Mohamad, pointing to the nearby Safsaf mosque where Osbat el-Ansar is headquartered. A reminder that no place in the camp is out of harm’s way, the façade of the building, featuring quotes from the Quran and posters of Bin Laden, is riddled with an erratic spray of bullet holes.

More clashes are expected, as military sources interviewed by IPS after the bombing accused one of the Fatah factions of the attack. Sources told IPS that the attack, like many others that had targeted the Jund al-Sham faction, was the result of a power struggle among Fatah leaders who could not agree a way to deal with Islamic militants.

In the meantime, civilians fall victim of this internecine war. “My uncle lives in the alley, they tell me he’s been badly injured,” a woman standing by the site of the explosion said calmly, her eyes void of any expression. “We are destined to die early, after all we are Palestinians.”