UPI, Mindanao, Sep 2 2008 (IPS) - Amidst the raging conflict between government forces and Muslim rebels on the island of Mindanao, the religiously mixed population in the North Cotabato region looks to a community radio station as a beacon of peace. 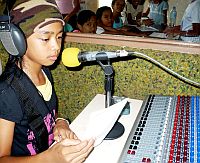 Set up four years ago under the ‘GenPeace’ (gender and peace) project, ‘DXUP-FM’ serves over 42,000 people in the mountainous Shariff Kabunsuan province of southwestern ARMM (Autonomous Region of Muslim Mindanao).

A multicultural community, Upi comprises some 17 ethnic groups. Of these the indigenous Tedurays are the most prominent, making up 44 percent of the people. The Muslims, known as Bangsa Moros make up 23 percent. Christians, mainly settlers from Luzon brought to the area during the United States’ occupation, form another 33 percent.

The ethnic composition of the community has created the term ‘Tri-People Community’ and it is this concept that drives DXUP’s programming philosophy and helps it to promote harmony among the people.

"Everyone here works towards appreciating the goodness of life," says station manager Mario Debolgado, a local businessman and an Anglican Christian.

"We have programmes for Muslims focusing on their culture and tradition. So people understand how Moro people live. Programmes on indigenous people focus on their traditions so that others understand their way of life. Our main objective is to build peace… development will come later," he added.

Interestingly, Upi was subjected, in 1970, to an attack led by the notorious cult leader ‘Commander Toothpick’ that left six people dead. Armed conflict then spread right across the region leading to the formation of the Moro National Liberation Front (MNLF) in 1972 and the launch of a secessionist war for a Bangsa Moro state which dragged on for well over two decades.

"Almost 50 percent of our programmes are on religion and culture. If you understand each other it is very easy to communicate. That’s how we promote peace here," noted Alih Anso, the station’s programme director.

"Peace is about absence of violence and we discuss the culture of every group so that other people will understand them," Mayor Ramon Piang, a Teduray, told IPS. He is one of the strongest backers of the radio station.

Tedurays, once the most marginalised community here, have now transformed into a confident group and DXUP is credited with playing a major role in this. "Tedurays are traditionally a very shy tribe but now it has changed a lot because they come and participate in the radio programmes," explained community elder Dominador Mandi in an interview with IPS. "By doing so DXUP has empowered the community. Our people do not believe any more that we cannot do anything good.’’

"Because of the radio station people now know what is their religion," one of the Imams of a mosque in Upi told IPS. "We hear programmes about Islam and Christianity done by our own people. So we learn about each other’s way of life and we learn to live in peace."

The imam argued that those who do not go to mosque or church get wrong ideas about their religion as well as that of others. But when they listen to the radio stations they get the right perspectives. "They hear discussions on religious ideas and the way you live and they begin to respect the other," he added.

"Sometimes people ask me, in your Koran, I heard in the radio that this is like this, very similar to our Bible," explained Abdullah Rashid Pulido Salik, the vice-mayor of Upi and chairman of the Community Media Education Council (CMEC).

"That shows how community radio creates peace. We do not discriminate on grounds of race or ethnicity, as long as you come and broadcast for the people’s good," said the local politician who is also a Moro Muslim.

The CMEC, which is a multi-sectoral governing and policy-making body, is the lynchpin of the GenPeace community radio model. It embodies the essence of the community-run concept and includes a cross-section of the community.

The station was established by the local government unit (LGU) of Upi with the assistance of the Norte Dame Foundation for Charitable Activities (NDFCA) and financial support from the Canadian International Development Agency (CIDA) and the United Nations Development Programme’s (UNDP) multi-donor scheme.

Today the station is dependent for almost 90 percent of its funding on the Upi LGU and is driven by volunteer support. Training for the volunteer broadcasters is given by the Philippines national radio network under a MOU signed to support the GenPeace stations.

Most of the cultural programmes and the news are broadcast in the Tagalog language, which is the national language of the Philippines, so that all communities can listen to and understand the programmes.

"The most important aspect of this radio station is that listeners are tuning in to each other’s cultural programmes," observes Mayet Rivera, a mass communication lecturer from Mindanao who is doing doctorate-level research on the DXUP model.

"It is very exciting and kind of enlightening that people are now able to listen to things that matter, understanding each other’s culture and pave the way for respect and trust,'' she added.