MIDEAST: Palestinian Politics on the Road to Nowhere

RAMALLAH, West Bank, Sep 22 2008 (IPS) - Israeli-Palestinian peace talks appear to have hit a dead-end, while efforts to bridge the yawning chasm which divides Hamas and Fatah politically and ideologically appear to be going nowhere. 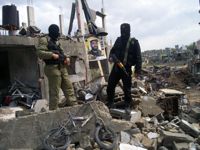 Fighters from the Islamic Jihad which is seeking to build truce between Hamas and Fatah. Credit: Mel Frykberg

The two main streams of Palestinian politics are already locking horns over when the next legislative and presidential elections will be held, and whether Palestinian President Mahmoud Abbas, or Abu Mazen as he is better known, is legally entitled to stay in power beyond January 2009.

Abbas said earlier that presidential elections would be held in January 2009 and legislative elections in January 2010. But he has now stated categorically that he would not step down until 2010. "I think that the elections for parliament and the presidency should take place together, in January 2010," he said last week.

Abbas further said that any future unity government would have to respect agreements signed with Israel.

The more militant factions in Hamas have stated they will not recognise Israel. But there are more moderate and pragmatic factions within the resistance movement who have hinted that some kind of future accommodation with Israel is possible.

Following Hamas's landslide legislative election win in January 2006, the Fatah-affiliated Palestinian National Authority (PNA) changed the electoral proceedings to provide for full proportional representation in an endeavour to weaken Hamas's chances of winning again. Earlier, half of legislative members were elected directly by constituencies and the other half through proportional representation.

The earlier system minimised the possibility of smaller parties who had won substantial votes from getting even a few seats in parliament. However, this backfired badly when it turned out that the majority of people in most of Gaza's constituencies were supporting Hamas, thereby preventing smaller pro-Fatah parties from forming a coalition with the PNA.

Hamas politburo chief-in-exile, Damascus-based Khalid Meshaal, reacted angrily to Abbas's intention to stay in power longer. "After January 2009 there will be no legal Palestinian Authority president except after elections. A president can't make his term legal through extension and through breaching the law," he said.

Dr. Moshe Maoz, professor emeritus of Islamic and Middle Eastern studies and senior fellow at the Harry S. Truman Research Institute for the Advancement of Peace, says the domino effect of this would mean no peace between Israel and the Palestinians while there is no unified Palestinian side.

Several analysts have said that Israel is playing a game of divide and conquer while creating facts on the ground in favour of the Jewish state.

It is widely believed that Israel, together with the U.S., was responsible for arming and training Fatah cadres in the Gaza strip to overthrow Hamas, before Hamas short-circuited the move with its own military coup that brought it into power in Gaza last year (after winning the election in 2006).

Many believe that Hamas was provoked into taking over. Extensive media reports both regionally and internationally had spoken of shipment of arms from Egypt through the Rafah crossing to beleaguered Fatah men in Gaza. As Israel monitors the Rafah crossing, these would not have reached Gaza without its complicity and tacit coordination with Cairo.

In May of last year, shortly before Hamas overthrew the PNA, U.S. Security Coordinator to Israel and the Palestinians, Lieutenant-General Keith Dayton, in testimony before the House Subcommittee on the Middle East, admitted that the U.S. was helping and training Fatah in its fight against Hamas. Earlier the U.S. State Department had denied this.

A factor further complicating the multi-dimensional dynamics of political developments is Hamas's recent differences with Egypt.

Egypt has been trying to mediate a prisoner exchange between the Islamic resistance organisation and the Jewish state, and to strengthen the shaky truce.

Egypt is sympathetic to Fatah, and regards Hamas as radical. Egypt is also afraid that the success of Islamic militants in Gaza could influence the Muslim Brotherhood, who President Hosni Mubarak has been battling for decades, and sees as a threat to his long and dictatorial reign.

Hamas says Cairo has reneged on talks to reopen the Rafah crossing from Gaza into Egypt, despite the ceasefire which has held since June, though there have been sporadic breaches by both sides.

Egypt has said the preliminary talks were a stepping-stone for more comprehensive negotiations to follow after the end of Ramadan. But this fall-out between Hamas and Egypt is likely to make it much harder for Egypt to help mend the rift between Hamas and Fatah.

While Hamas and Fatah are at each other's throats, the PNA's peace negotiations with Israel have ground to a halt over Israel's refusal to address core issues such as water, settlements, security, borders, the return of refugees, and the claims to East Jerusalem as capital of a Palestinian state.

The Israeli foreign ministry was thrown into turmoil when U.S. Consulate-General Jake Walles told a Palestinian daily that Israel had agreed to cede East Jerusalem to the Palestinians. The report quoted Walles as saying that the U.S. Secretary of State Condoleezza Rice had said on her recent visit to Jerusalem that Israel's withdrawal to the 1967 borders, with some territorial adjustments made by both sides, would be the basis of a future peace settlement.

This was strongly denied by an Israeli government spokesman, but Moaz believes that Walles's statement could be true.

"I believe the reason behind the Israeli Foreign Ministry's fierce denials regarding agreeing to the division of Jerusalem is due primarily to fear of losing the Israeli public's support, many of whom are strongly against any division of what they see as their eternal capital."

The ruling Kadima party's fragile coalition depends on support from smaller right-wing ultra-orthodox parties. These groups have previously threatened to leave the coalition should Jerusalem's future even be discussed.

Moaz believes that two major developments could change the status quo and nudge the deadlock towards some kind of breakthrough.

"A new Israeli government with a more pragmatic leader could possibly give some political momentum to the peace process. But I'm not sure that Israeli Prime Minister Ehud Olmert's likely successor, Foreign Minister Tzipi Livni, will be any more conciliatory than her predecessor.

"What is really needed is a more pro-active American administration coming into power and leaning on Israel, as the country needs to be pressured."