KANO, Sep 29 2008 (IPS) - As the holy month of Ramadan draws to a close, residents of the northern Nigerian city of Kano have endured double pain: already high food prices have been driven through the roof. 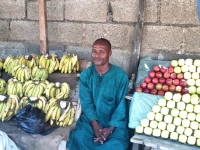 Fresh fruit and vegetables are priced out of reach of the poorest. Credit: Salma Ahmad

“I usually buy fresh fruits like oranges, bananas and pineapple on a daily basis during Ramadan,” says Muhammad Aliyu, a civil servant. “But this year, I only buy them twice a week due to the high cost.”

Food during Ramadan is traditionally a break from the usual maize and rice-based staples of tuwon masara and tuwon shinkafa. Kano residents prefer to break their fast with eggs and fried potatoes, salad and fresh fruit – food items most people cannot afford to buy during the rest of the year.

The hardship has reached beyond the poorest Kano residents to affect even individuals with decent jobs. Where in the past, households have purchased food items in bulk to be consumed through the fasting period, this year many have been reduced to buying food in small quantities they can afford.

For example the price of a 50 kilo bag of black-eyed beans, the main ingredient in the tasty deep-fried dumpling known as kosai, has shot up by 40 percent. Eggs and chicken have gone up by a similar amount. Potatoes cost fully 60 percent more than just four weeks ago when Ramadan began. Vegetables are also up by 60 percent. The price of yams – ordinarily eaten in large quantities during the month of fasting – is also up by 40 percent.

Only the cost of rice, a popular festive food in Northern Nigeria, has remained stable during the fasting period.

A majority of residents point an accusing finger at retailers for the sudden increase of the items’ prices during the period of Ramadan. Lawali Sale, who sells grains like millet, maize and other cereals at Kano’s Dawanau Market, confirmed that many of his friends habitually raise prices at this time of year.

“To be frank, I have friends that raise prices although I don’t do it. But some do it for a reason. My friend Haruna who also sells food items, relies on that quick profit to buy sallah gifts for his family and he has two wives and nine children.”

Bala Muhammed, Director General of the state’s Directorate of Social Orientation, told IPS, “The Directorate is aware of the poor attitudes of food retailers who are just waiting for this period to put pressure and unrest in people’s minds for their selfish interest.”

Bala noted that “as an authority that creates awareness on re-orientation, we advised them to keep off that habit if really they want God’s blessings in the holy month and their entire lives.”

Habibu Ali, a resident of Ba-ta-Kulki quarters and a junior officer in the state civil service, stated in an interview with IPS that “People always get excited as Ramadan approaches as they have opportunity to change menu and have access to fresh foods.”

“This year in Kano, even those employed and those in businesses have bitterly tasted the effect of the hike in prices of food items and have also felt the impact of the food crisis in the world.”

As a head of a household of twelve people, Habibu complained of how he had to trim down “excess feeding” to a minimum during the fast.

Habibu says, “If not for the government’s intervention through its free feeding for the Ramadan period, some people may die of starvation, because they can’t afford to eat, and people were not giving out as much as they were given in to assist others.”

The state’s Zakka Commission, tasked with alms giving and helping the needy, through the public treasury fund, disclosed that the state government had embarked on free feeding programme to relieve the situation, budgeting around 1.2 million dollars. The programme provided food to target over 40,000 poor people at various locations of the 44 local governments across the state.

Prices have also been affected by poor harvest. According to the Rice Farmers Association of Nigeria, Kano branch, less than 70,000 hectares were cultivated this year, producing about 370 metric tonnes of paddy rice across the state last year, in a harvest affected by poor rainfall.

The chairman of the state chapter of the Association, Alhaji Abubakar Haruna, has clear views on how to solve the food price problem.

“The only solution will be when the government begins to buy crops directly from farmers and selling it to consumers at a subsidized rate. It will also be good if the government revives the cooperative societies and marketing boards to maintain price controls.”

The Nigerian government has waived import duty on rice importation into the country to try to reduce the hardship of the citizens; despite this, prices rose steadily higher through the Ramadan period and the import duty waiver expires in October 2008.