LUANDA, Sep 4 2008 (IPS) - Angola’s economy may be booming on the back of high oil prices and strong diamond exports, but six years after a peace deal ended the 27-year civil war, unemployment stands at around 65 percent. 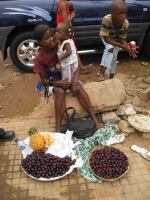 Take a walk down any street in Luanda and next to the shiny banks and new office buildings, there are street vendors, many just teenagers, hawking anything they can find to make a living.

This lack of jobs and the country’s poor education system are some of the major debating points for voters ahead of Friday’s election.

Ask anyone here what they want from politicians and while they usually say peace, their second wish is a job or the guarantee of a job for their children.

Bella, who looks significantly older than her 24 years, sells fruit on a patch of pavement near the National Assembly building.

The pomp and majesty of the guards outside the parliament cut a stark contrast to Bella’s modest fruit stall which is swarming with flies and sits just metres from puddles of stagnant water.

“I’ve been doing this for four years because I can’t find another job,” she explained. “It’s okay but I want another job to earn more money for my family. I have a four-year-old son and if I don’t make enough money, we go hungry. That’s how it is.”

One major reason for Angola’s high level of unemployment is the mass migration from the countryside into Luanda during the war.

Justino Pinto de Andrade, an economist at Luanda’s Catholic University, explained: “These families were from agricultural backgrounds, used to working on the land.

“But in the city it isn’t possible to farm the land so they have had to find other activities, like selling things on the street, cleaning houses, driving etc. But this is not enough to create enough jobs for everyone, so we see this high number of people without work.”

Mr Andrade said while some Angolans were finding work within the oil industry, a lack of education – again because of the long war – meant many lacked the required qualifications and the jobs were going to expatriates instead.

He said there was a similar picture in the building industry, where contracts for major works like hotels and apartment blocks were usually going to Chinese, Brazilian and Portuguese companies and then these companies were importing their own unskilled labour.

“This isn’t generating jobs for Angolan workers,” he said.

Before the war, Angola was the world’s fourth biggest coffee producer and a top exporter of sugarcane, bananas and cotton.

And as the fertile countryside is slowly de-mined and made safe, agriculture is once again being seen as an area of potential.

The ruling MPLA (Movimento Popular de Libertação de Angola) says if it is re-elected, it will continue with recently-launched micro-credit schemes to help small farmers make money from their land and most opposition parties have included a policy on developing agriculture in their manifestos.

He said: “When the oil goes, we have no alternative. It’s almost a national security necessity to diversify our economy.

“Agriculture will not only take care of our food security but it will employ more people as it is very labour intensive, it will address the need to develop rural economies, develop the rural towns.

“Let’s use the resources we get from oil to begin to invest in our agriculture.”

A major challenge for Angola after the end of the war has been to decentralise. The MPLA, founded on Marxist principles, for many years focussed on government-led schemes. There is now a movement towards the private sector.

Luanda-based economist Salim Abdul explained: “In the long-term you have to invest in human capital, through education, through health, through living conditions to improve people’s performance, their productivity and their knowledge.

“You can have your natural resources but if you don’t manage them effectively it is no good. You have to manage the human capital and that takes generations.

“If you look at India, China, Japan, how they developed was by human capital so that’s the challenge for not only Angola but the majority of countries in Africa.”

As dusk falls in central Luanda Bella gathers up her unsold fruit and makes her way back across the city to her small home.

She said: “I will be voting, definitely. I don’t know if the election will make a difference, but I want the politicians to make more jobs, I don’t want my son to sell on the street like me when he grows up.”