VIENTIANE , Sep 30 2008 (IPS) - Concerns over the future of fisheries in the Mekong River floated to the surface at the first round of discussions held here late this month to shape a blueprint to build a series of mega dams across South-east Asia’s largest body of water. 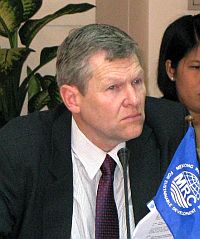 Some fisheries experts warned that the proposed eight dams to harness the waters of the Mekong in Laos and Cambodia will be a ‘’barrier to fish migration,’’ impacting a billion-dollar economy and a valuable source of nutrition for the 60 million people living along the lower Mekong basin.

The 4,880-km-long river, which flows from the Tibetan plateau, through southern China, and goes by or through Burma, Thailand, Laos, Cambodia and Vietnam, has nearly 50 commercial species of fish that migrate up and down the river throughout the year.

Such concerns will have to be addressed by the dam developers, says Jeremy Bird, the head of the Mekong River Commission (MRC), a regional body whose members include Thailand, Laos, Cambodia and Vietnam and which has a mandate to manage the lower Mekong basin. Bird, who took over the helm of the MRC six months ago, welcomes the regional interest in building new dams, as he revealed during an IPS interview.

IPS: Four years ago there was hardly any talk of building dams on the lower stretch of the Mekong River’s mainstream. But now there is a burst of interest, with plans for eight dams in Laos and two in Cambodia. Why the sudden shift? Jeremy Bird: Plans for dams on the mainstream of the Mekong have been talked about since the 1950s, but the very large ones were not built because of concerns over resettlement. Then back in the mid-1990s the Mekong Secretariat, the precursor to the MRC, looked at a number of possible projects, but smaller ones. They didn’t go ahead because of the (1997) financial crash and the reduction in demand in Thailand in particular.

But there are a number of reasons now why there is interest among (dam) developers. One is the high oil and gas price; the other is a general interest in hydropower as a renewable technology because of concerns over climate change. Also, there is an availability of finance in the region from China, Malaysia and Thailand.

IPS: Who is driving such plans, for whose benefit is it? JB: The whole region is witnessing an increase in the demand for electricity. Vietnam’s annual increase is to the order of 15 to 16 percent in electricity demand growth. Thailand also, since a lot of the power generated in Laos will go there. And also here in Laos, although domestic consumption is relatively low, with the increase in mining the country will also require considerable amounts of energy.

IPS: Does this mean that the river, as we know it, will be completely transformed after the dams are built? JB: The proposals for the dams are just proposals. They have not been approved for implementation yet. There is still a lot of study to be done, more consultations under the 1995 agreement (where dams on the mainstream have to be approved by all four MRC members) that need to take place. And it is difficult to say at this stage how many of the projects would proceed. Clearly dams change the natural course of the river. They change river flows, they change sedimentation patterns, they have an impact on fish migration. Some of those impacts can be mitigated but others require much more complex solutions and have social implications as well.

IPS: At the moment research has shown that the annual economic value of fisheries in the Mekong is three billion U.S. dollars. And the people who are benefiting from fisheries are large, poor communities who live on the banks. But the ones who are going to profit from the dams will be a select group. Is there a danger that you are creating a trade-off here, choose fishing or dams, and the loss for the people at the bottom end of the economic spectrum will be far higher than what the dam developers envisaged? JB: That assumes that no measures are taken to address this problem, which everybody now is talking about. I think one of the important things of this meeting is that the issue of fish migration has become so central to the discussions. We heard so many presentations, so many questions about this. I think even the developers recognise this.

With this, there will be tremendous efforts now targeted towards first of all avoiding those impacts; if that is not possible, to then minimise what they are and to then mitigate to the extent possible. And in doing so I think this other concept has been discussed, of benefit sharing. So this concept of trade-off in your question implies there is a winner and a loser. I don’t think it is always possible to get win-win solutions so that you could preserve the status quo, but you can avoid having win-lose situations.

IPS: Are you concerned that the proposed dams may end up creating the problems that arose after the Pak Mun Dam was built in Thailand in 1994, most glaring of which was it stopped fish migration and affected 9,500 families living on the banks of the largest tributary to the Mekong? Even the World Commission on Dams report drew attention to this, saying that such a dam should not have been built. JB: That project, along with a number of others, has certainly increased our understanding of the importance of migratory fish and their effect on people’s livelihoods. I think our level of knowledge now is much, much better than what it was than when that project was being planned and the level of open discussion in the planning process is much wider.

IPS: This is your first consultation for hydropower development on the mainstream of the Mekong and you had many high-profile people, from government officials, dam and fisheries experts to dam developers. But why were the people from local communities living on the river’s banks, who will face the brunt of the changes being discussed, not invited? JB: At the moment I do not see that as a problem in terms of involving communities directly in a meeting like this, which is taking place in English, in an environment that the communities are not familiar with. I think if we had done that, we would have been accused of a cosmetic approach, of trying to demonstrate some sort of validity of the process from that point of view. What is important for us is to understand the concerns and the problems of those communities and we can do that in a number of ways. We will have many opportunities to do that, like village-level consultations.