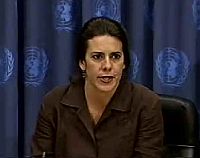 Combating violence against women is what Inés Alberdi, executive director of the U.N. Development Fund for Women (UNIFEM), calls the missing goal, because it is not an issue addressed by the U.N.’s Millennium Development Goals (MDGs).

But it is an issue with a lot of faces, like Joyce, who was raped during the post-election violence in Kenya, and Tanya, who is a survivor of domestic violence in New York City.

“My husband beat me when I was pregnant with his son. He isolated me from my family and held me like a hostage in our home,” 42-year-old Tanya told IPS. After about four years of fear and suffering, when her husband killed the dog and threatened her children, she left.

U.N. officials point out that the fight against gender-based violence is making progress on some fronts. “More governments than ever are having violence against women on their agenda,” Maria José Alcalá, a senior advisor at UNIFEM, told IPS.

Now is a “most historic opportunity” to “change hearts and minds”, to overcome “limited political will of many countries” and to stop them declaring violence against women a private matter – a women’s issue – she added.

Even though the problem is not explicitly addressed by the MDGs, Secretary-General Ban Ki-moon emphasised in his latest report to the General Assembly that sexual violence is a human rights issue that poses a serious obstacle to the consolidation of peace and the achievement of the broader MDGs.

“The prevalence of gender-based violence has serious repercussions, including exposure to HIV/AIDS, other sexually transmitted diseases, unwanted pregnancy and the abandonment of victims by their families,” he pointed out.

Thailand, for example, amended its criminal code to expand the definition of rape so that all types of sexual penetration are covered by the law. Fifteen of the 28 African states where female genital mutilation (FGM) is prevalent have made it an offence under criminal law. And Turkey, Venezuela and Mexico enacted laws to criminalise domestic violence.

In Kenya, the so-called Waki Commission of Inquiry is investigating acts of sexual violence committed during the post-election turmoil at the start of this year. Countries like Algeria, Bulgaria, Chile, Germany, the former Yugoslav Republic of Macedonia and Vietnam concluded several bilateral arrangements to fight violence against women together.

However, “it is not enough that these laws exist now. They need to be interpreted on local levels,” Millicent Obaso, the regional HIV and AIDS advisor to Care in East Africa, told IPS. U.N. agencies could work closer together with local NGOs to work on that challenge, she added.

“Violence against women is still an epidemic that does not confine to a specific culture or country,” UNIFEM’s Alcalá told IPS. The roots lie in historically unequal power relations between men and women.

But “culture has often been used to perpetuate violence against women and girls,” Aminata Toure, chief of the culture, gender and human rights office at UNFPA, told IPS.

“For example, female genital mutilation is practiced on adolescent girls, and in some countries, girls or women are killed in the name of honour, often without fear of impunity,” she added.

Rape is also still used as “a tactic of war”, as the U.N. Security Council declared in a resolution passed in June. Not only insurgent groups are guilty but also soldiers, police officers and even, in some instances, U.N. workers and peacekeepers. Every day, hundreds of women have been and are raped in Darfur, along with many others in conflict and post-conflict situations around the globe.

“Two of my neighbours broke into my house, assaulted me with machetes and slashed my ribs before they raped me,” Joyce said, recalling the nightmare she endured and that she still dreams of.

With her hair salon burned down, and kicked out of her home when her husband found out that she was infected with HIV as a result of the rape, Joyce now lives with her four children in a camp for the internally displaced along with hundreds of others in a Nairobi suburb.

Her daughter goes to school with the children of those who raped her. “Now that I could escape and survive, they may try to kill my daughter,” she fears.

Living in a continual state of fear is only one latent effect that victims of all forms of violence share.

With 40 to 70 percent of female murder victims having been killed by their partners in Australia, Canada, Israel, South Africa and the United States, according to the World Health Organisation (WHO), intimate partner violence is the most widespread form.

Some women apparently have a higher risk of becoming victims. According to the 2008 report on intimate partner violence against women in by the New York City Department of Health and Mental Hygiene, African American and Hispanic women were more than twice as likely as women of other ethnic groups to be killed or injured by an intimate partner.

In Europe, North America and Australia, over half of women with disabilities have experienced physical abuse, compared to one-third of non-disabled women.

“A lot of women are stigmatised and traumatised, sometimes even doubly traumatised,” Sheila Dauer, a human rights specialist with Amnesty International USA, told IPS. “First they are victims of violence, but they are also left alone without any protection of the law.”

In countries like Pakistan and Jordan, for example, discriminatory laws equate rape with adultery, and victims themselves end up being arrested and taken to jail, she added.

“When women are abandoned by their families, they live on the streets where they are more vulnerable for sexual abuse – or where they have to give a little bit to get some food for their children,” said Obaso from Care in Kenya, stressing that there are many ongoing consequences.

These are one reason why so few rapes are reported to the police and why data and statistics on violence against women is still insufficient for global monitoring, Francesca Perucci of the U.N. Statistics Division told IPS.

The U.N. is now working to build a database concerning violence against women. Gathering statistics on the scope of the problem will support the U.N. and NGOs to help women like Joyce and Tanya. And maybe the database will enable the issue to be addressed by the next MDGs, too.