FREETOWN, Sep 29 2008 (IPS) - Magnus Kamara is a school inspector with a difference. He has been hired to find schools that don't exist. 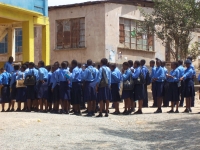 "It has been a shocking experience. In some of the towns and villages we visited, there were neither school structures nor genuine teachers, but the government was always paying salaries and subsidies to them, on monthly basis."

Kamara is working as part of a verification exercise ordered by Sierra Leone's ministry of education. In one village, in the north of the country, there were eight registered schools for verification, he says. "But we never saw a single structure, nor the teachers and the list of pupils was so long, but when we asked to see them, there was no one available."

The Education Minister, Minkailu Bah, is moving swiftly to end the fraud.

"It is a carefully planned operation aimed at depriving the government of revenue, through the activities of fraudsters in the educational system," he says.

Bah accuses officials in his own department of collusion with their counterparts in the Finance Ministry, which pays out salaries to public workers to defraud the government of tens of thousands of US dollars in salaries and subsidies paid to non-existent teachers, schools and pupils.

"This syndicate works because staff of my ministry, including supervisors and education secretaries, connive with officials from the accountant general's office, to carry out the act," Bah adds.

IPS could not get any willing official from the ministry of education and the accountant general's office to comment on the minister's allegations.

The phantom school syndicate has been revealed by a countrywide school verification exercise by the minister, to ascertain how many genuine teachers are on the government's payroll and how many schools and pupils exist in the country.

The minister also hints at tough measures he would take to address the problem.

"I am going to close down, for a start, eight 'ghost schools' that I personally discovered in the district of Tonkolili, in the north. While there, I asked to see the teachers, of a particular school, on verification day, and of the 20 young men and women that appeared, not a single one was a genuinely employed teacher. There was also no school structure, to my dismay. "

The proprietor and staff immediately fled the scene when they realised police were about to effect their arrest, the minister added.

Sierra Leone's schooling system was crippled by a bitter civil war, that lasted from 1991 to 2002. The conflict devastated infrastructure and displaced pupils and teachers.

"The proliferation of so-called ghost teachers, ghost schools and ghost pupils predates the war," opines Thomas Kobba, a social analyst and educationist. "This all has to do with corruption that has eaten into the fabric of society, but became rampant after the war because of massive poverty and the decline of morals and standards in the system."

On top of this, low wages for teachers and school authorities helped fuel corruption in the schooling system, thus paving way for the ghost syndicate to flourish. An average secondary school teacher's monthly salary is no more than $70, not enough to maintain a household.

With funds provided by UNICEF, World Vision and other non governmental organisations, the Sababu Project has assisted in the construction or rehabilitation of primary and secondary schools, in major towns and villages. These, too, have left much to be desired.

In some of the project sites, the school structures are available but there are no benches and desks, nor learning materials. Some of the buildings are yet to be occupied because they are either incomplete or shoddily built.

The current government of President Ernest Bai Koroma, which assumed office last September has made no secret of its determination to fight graft in public service. The current school verification exercise is directly linked to the fight against corruption.

But it is a Herculean task. The government is yet to pay hundreds of newly-recruited teachers their salaries; the backlog is as long as six months in many cases, and the affected teachers have been threatening to down tools if their emoluments are not paid, soon.

Education Ministry officials say the delay in the payment of salaries of new teachers is directly related to ghost salaries which have been significantly soaking up funds at the ministry.

One of the so-called ghost teachers, who spoke to IPS on condition of anonymity, said he was convinced by local education authorities to present himself for verification, even though he was not officially employed.

"I was told a list had been sent to the verification team and that once I filled in one of the names, I will get something. I am not employed and find it hard to make ends meet, so I took the chance," he said.

The minister says he is still compiling the list of "ghost schools to be banned and says no arrests have been made. He is yet to publish the full details of the verification exercise.

Official figures suggest that Sierra Leone has a total of 33,165 teachers, a figure the minister vehemently disputes. "I don't believe this country has that number of teachers; that is why I insisted on the countrywide verification exercise."

Bah could not give exact figures on the revenue loss to the government but believes it is significant. "If you take into consideration the subsidies we pay for these non-existent schools, non-existent teachers and inflated roster of pupils, then it is easy to surmise that the government loses tens of thousands of dollars, every month."

Meanwhile, the minister has told IPS that the entire education ministry will be overhauled after the verification exercise, especially in the area of personnel, so as to stamp out massive corruption which has caused the country's anti-corruption commission to label it as "one of the most corrupt departments of the government."