MANZINI (Swaziland), Oct 25 2008 (IPS) - The collapse of the financial markets may force the World Bank, the International Monetary Fund (IMF) and the United Nations Development Programme (UNDP) to come down hard on African countries to repay their debts because the huge rescue packages for collapsing banks will need to be recuperated. 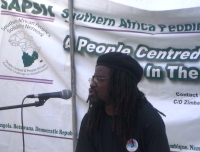 This is the view of Munyaradzi Gwisai of the International Socialist Organisation (ISO) of Zimbabwe. He spoke at the recently held seventh Southern Africa Social Forum in Manzini, Swaziland. The ISO is concerned with justice and liberation and working towards a ‘‘future socialist society’’.

The demand for repayment ‘‘will result in further cuts on education, health and social services budgets, which will result in severe and savage cuts on the standards of living of the people in Africa and will leave the attainment of the United Nations’ Millennium Development Goals in danger,’’ said Gwisai.

Gwisai spoke about how Africa is caught up in the issue of debt and development and the recent developments in the financial markets, which witnessed a debilitating crush that left some of the world's major markets in limbo.

Sino-African relations also came under an intense spotlight. The topic, discussed under the auspices of the Southern African People's Solidarity Network (SAPSN), tried to link the issue of debt with the growing role of China in African politics and economies.

Mandla Hadebe, who works with the African Forum and Network on Debt and Development (AFRODAD) in Zimbabwe, said his organisation is in the process of publishing a series of publications on China's role in Africa. AFRODAD is a civil society organisation based in Harare, Zimbabwe. It seeks lasting solutions to Africa's mounting debt problem.

Hadebe talked about a study which looks at China's presence in four African countries: Zimbabwe, Angola, Malawi and Zambia.

‘‘We were trying in the study to look at the implications of China's presence in these countries. We asked whether China's re-emergence is a silent re-colonisation of Africa with its non-interventionist policies based on political trust, mutual exchange or on a win-win approach,’’ Hadebe explained.

Several speakers at the meeting seemed to be in agreement that China is no different from the traditional lenders to African states, such as the Bretton Woods Institutions (the World Bank and the IMF).

Morgan Jeranyama of the non-governmental Zimbabwe Developing Communities Programme (ZDCP) said China's involvement in Africa should be looked at from the point of view of the need of the African countries rather that of foreign lending countries such as China.

African countries should link aid to their needs. ‘‘We need aid but we have to also ask ourselves about the motives of some of this aid. We have to say what aid we need for what reason. The aid should be identified by the communities who are in need. In essence, aid should be motivated by the need to change people's lives,’’ said Jeranyama.

‘‘Aid should transform lives. Effective aid brings desired results but for that to happen there should be ownership of the programmes for which aid is sourced for by the communities.’’

The Nigeria Social Forum is meeting from Nov 2 to 5. The African Social Forum takes place in Niger from Nov 25 to 28. The next WSF, where anti-globalisation activists from across the world gather, is happening in January 2009.

*This is the second of two articles. Follow the link below to read the first.