JOHANNESBURG, Oct 3 2008 (IPS) - As Africa grapples with the question of food insecurity, biotechnology buffs seem to have an answer: genetically modified crops that could feed a continent vulnerable to famine and food deficits. But environmentalists warn of new dangers. 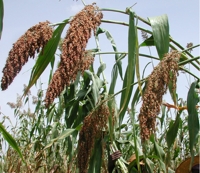 An appeal board recently overturned opposition from the South African GMO Executive Council to allow testing of a nutritionally enhanced, genetically modified sorghum, known as 'Super Sorghum' in greenhouses in Pretoria.

The application by the Council for Scientific Industrial Research (CSIR) – and endorsed by South Africa's Minister of Land Affairs and Agriculture – was successful at the second attempt when the applicant supplied additional information that it would meet biosafety requirements for the laboratory trials.

Genetic modification involves identifying the genetic codes for specific traits in plants or animals and removing or exchanging them to create varieties with desired characteristics. Biosafety refers to the safe transfer, handling, and use of any living modified organism resulting from biotechnology.

The battle between supporters and critics of genetically modified (GM) crops that promise higher yields, better resistance to pests or adaptability to a changing climate is expected to increase in intensity should this trial move from the greenhouse to the fields.

Biotechnologists and scientists are celebrating the decision to license the CSIR to develop 'Super Sorghum' under the "African Biofortified Sorghum" (ABS) project which received a 16.9 million dollar grant from the Bill and Melinda Gates Foundation. The aim of the ABS Project is to "develop sorghum with improved food quality by enriching it for essential amino acids (part of the protein component of the diet), and later by increasing its content in essential vitamins (vitamin A and E)."

"This process proves that South Africa has robust regulation," the CSIR Biosciences Executive Director, Dr. Gatsha Mazithulela, said in a media statement. "We respect the fact that decision-makers have an obligation towards safety and that rigorous investigations are part of the process. Work on the project will now continue in our level 3 biosafety greenhouse."

The pro-GM lobby argues that while sorghum is one of the few crops that grows well in arid parts of Africa, it lacks many essential nutrients and has poor protein digestibility – qualities that biotechnology will improve. The anti-GM lobby strongly dismisses this, saying African farmers have traditionally been fermenting sorghum to make essential nutrients available to the human digestive system. In addition, farmers have developed their own sorghum varieties, high in lysine, which they grow when needed. They fear that these varieties would be threatened by contamination by GM sorghum.

Mazithulela says the CSIR and its consortium partners support biosafety. They are undertaking additional measures to satisfy regulators and the public that the work conducted is ethical, conforms to the highest safety levels, and is in the interests of the public.

"The consortium has already started investigating some fundamental questions in genetics of sorghum as an additional contribution to knowledge in this area," said Mazithulela. "Scientific progress will be documented for scientific review and the organisation will keep the Minister's advisory panel abreast of developments."

The African Centre for Biosafety (ACB), which objected to the CSIR's 2006 application, condemns the decision, stating that experimentation with GM sorghum will inevitably result in the contamination of Africa's prized sorghum heritage.

"The risks posed by GM sorghum to wild and weedy relatives cannot be tolerated at all and the granting of this permit is tantamount to a licence to taint Africa's heritage," says researcher and outreach officer of the ACB, Haidee Swanby, adding that, "We objected to the original permit, and the permit was denied by our government. The Industrial Research Council appealed the decision and they won the appeal. So this is the end of the road."

Sorghum is the main food source for more than 100 million farmers in Sub-Saharan African according to the Pantancheru, India-based International Crops Research Institute for the Semi-Arid Tropics, a research organisation focused on the needs of the poor.

The ACB says the ABS project is being developed for commercial release and the CSIR will be seeking permission for field trials soon.

"It is a done deal," Swanby told IPS, "However this permit is for experimentation in a contained environment. The next permit application will be for open field trials and we will fight that application hard."

Research released this year – carried out under the auspices of the UN's Food and Agriculture Organisation (FAO) and accepted by 58 countries, including South Africa – found that supporting local ecological forms of agriculture and transforming unfair trade policies would be a better strategy towards food security than GMOs.

More than 400 contributors were involved in producing International Assessment of Agricultural Science and Technology (IAASTD) draft report, drawing on the evidence and assessments of thousands of experts worldwide. The IAASTD was launched as an intergovernmental process, with a multi-stakeholder Bureau, under the co-sponsorship of the FAO, GEF, UNDP, UNEP, UNESCO, the World Bank and WHO.

Elfrieda Pschorn-Strauss, programme officer for GRAIN Africa, an organisation that promotes the sustainable management and use of agricultural biodiversity, says, "It is not for the South African government to decide, on behalf of the rest of Africa, that they may approve an industrial project which will result in the inevitable contamination of Africa's astounding genetic diversity in sorghum. This crop has been developed and cared for by farmers for over 5,000 years."

But according to biotechnologist Wynand van der Walt, modern biotechnology application, especially used in agriculture, food science, bio-processing, and medicine, offers opportunities to ensure food security in Africa. He says the anti-GM activists have failed to bring evidence to bear that GM crops posed a threat to health and the productivity of other crops.

Foods from GM crops, Dr. van de Walt, says have been consumed by over 3 billion people on all continents and there are no substantiated cases of negative impact on human health or the environment. On the contrary, GM crops have ensured substantial reduction in pesticide use (some 290,000 tons) to the benefit of humans and the environment.

"We have high food prices and high food insecurity," van der Walt says. "We cannot wait for long term policy discussions. The urgency is now and all of us have an obligation to go out and communicate and counter the misinformation we face every day about GM crops."