ALTO DEL CARMEN, Chile, Oct 9 2008 (IPS) - The Diaguita indigenous community in Huasco Alto, surrounded by rich gold, silver and copper deposits in the northern Chilean region of Atacama, are engaged in a struggle to prevent mining projects from infringing on their territory and destroying their way of life and ancestral identity. 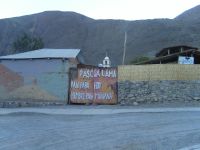 The community of 260 families, comprising 1,200 people, lives in the fertile valley of the El Tránsito river in the municipality of Alto del Carmen, 190 km southeast of the regional capital, Copiapó. The people are known as Huascoaltinos because they occupy Huasco Alto (Upper Huasco), the highest slopes of the wider Huasco Valley.

Dozens of Huascoaltinos who spoke to IPS are convinced that the multicoloured valley where they live will be completely destroyed by large-scale mining of the mineral deposits found in the heights of the snow-covered Andes mountain range, the source of the meltwater that irrigates this oasis in the Atacama desert.

“They want to take everything from us,” says 89-year-old Huascoaltino craftsman Martín Ardiles as he completes the plaiting of a leather horse’s halter. “If they pollute the water, nothing will be left.”

In 1997 the people of Huasco Alto formally established themselves as a farming community to better protect a tract of land that was registered in their name in 1903. The collectively owned property of 239,918 hectares includes rivers, brooks and hills, as well as the small individual plots of land belonging to each member of the community.

Like most of the people who live in Alto del Carmen, Huascoaltinos are descended from the Diaguita indigenous people, an ethnic group that was legally recognised by the Chilean state in 2006.

In Chile and northwestern Argentina, the Diaguita ethnic group developed an important culture in pre-Columbian times.

Since the 17th century, the Diaguita have lived in the same valley, where they still cultivate the soil and herd goats and cattle, anthropologist Pedro Campos, one of the authors of the book “El valle de los naturales. Una mirada histórica al pueblo huascoaltino” (The Valley of the Natives: A History of the Upper Huasca People), told IPS.

The unique identity of the Diaguita never disappeared, says Campos, but it remained hidden for centuries while state policies sought assimilation. Now, he says, they are experiencing increased cohesion and visibility as an indigenous group, but this is being threatened by the mega-mining projects that are encroaching on them.

The Diaguita say the Canadian mining giant Barrick Gold Corporation’s controversial Pascua Lama gold mine, which straddles the Chile-Argentina border in the Andes, will open the door to other large-scale mining projects.

Although the Pascua Lama mine obtained environmental authorisation from the Chilean government in early 2006, and from the Argentine government in 2007, the starting date for its operations is still uncertain. The company is waiting for both countries to define the tax regime and approve further mining permits.

Given the delay, the press has speculated that Barrick will only mine in Chile, where the largest portion of the deposits lies.

The community fears that the open cast mine will destroy the Toro I, Toro II and Esperanza glaciers, and that it will pollute rivers with heavy metals present in the mountains, such as arsenic, and other substances like cyanide, used to separate the gold from the ore.

The glaciers have already shrunk by between 50 and 75 percent during the exploratory phase, as the state General Directorate of Water (DGA) confirmed in 2005.

After exhausting all national legal remedies to block the project, the Huasco Alto community brought a lawsuit against the Chilean state before the Inter-American Commission on Human Rights in 2006, with the support of the non-governmental Observatory on the Rights of Indigenous Peoples (ODPI).

Plácido Ávila, the Atacama regional head of the state National Environmental Commission (CONAMA), told IPS “many myths have grown up around this project, no doubt because of disinformation.”

The government is relying on the glacier monitoring plan, a requirement imposed on the company when the mining project was approved. The design of the monitoring plan was authorised a few weeks ago.

But Remigio González from Huasco Alto, a truck driver who has worked for Barrick, is not optimistic. Many high altitude wetlands in the mountains have already been destroyed by road-building, he told IPS.

ONE PROBLEM AFTER ANOTHER

The community accuses companies and families from outside the valley of having usurped land by illegally buying land rights from some members of the community after 1903. One of the tracts of land, legal ownership of which is being disputed in the courts, is the 50,000-hectare lot purchased by Barrick Gold for the Pascua Lama mine.

Other lands that, according to the Huascoaltinos, were acquired fraudulently decades ago, now belong to owners of large vineyards, who have not hesitated to expand into the hills belonging to the community, local residents allege. If the lawsuits against them do not prosper, some families will have to leave their homes because of overlapping land titles.

The residents of Huasco Alto are also disturbed by the road improvement works and four new bridges being built by the Ministry of Public Works.

IPS heard many complaints: people will no longer be allowed to herd their animals along the road, the road lacks containment barriers, and the builders stole gravel from the river bed and destroyed archaeological sites. A number of complaints have been filed.

Seventy-year-old Santiago Leiva worries that in a year of heavy rain fall, the river may overflow and flood their houses. He asks, “Do you think that the road will be of any use to us?”

He and other people in Huasco Alto think that the road was built for the mining companies’ trucks, but the regional head of road transport, Raúl Cornejo, assured IPS that it is part of the road network the country needs, and denied that artifacts had been destroyed, or that there is any risk of flooding.

The other large mining project the Huascoaltinos are opposing is El Morro, belonging to the Switzerland-based Xstrata Copper and Metallica Resources from Canada, which merged with two other companies in June to form New Gold. The planned open cast copper and gold mine is expected to cost 2.5 billion dollars.

The consortium attempted to reach an amicable agreement with the community for the development of the project, without success. But at the companies’ request, under the Mining Concessions Law, the courts granted them temporary rights over land they wanted for exploration purposes, without the consent of the Huascoaltinos who graze their flocks on that land.

Sergio Campusano Vilches, the head of the community, told IPS they have made over 70 complaints against El Morro, reporting the destruction of things like “llareta” plants (Azorella compacta, used for medicinal purposes) and prehistoric rock engravings.

An accusation of usurping surface water rights led to CONAMA issuing a reprimand to the company.

According to El Morro’s general manager, Marcial Maturana, Xstrata Copper “was probably not directly responsible” for the actions complained of.

El Morro was “designed jointly” with the community, and includes two of their major demands: it uses desalinated sea water for its operations, and the company agreed to an alternate access road to the mine, Maturana said. The mine’s sophisticated refining procedures will reduce the risk of pollution to a minimum, he added.

Local resident Briceida Cayo told IPS that company workers told her she should abandon the flock of goats she has higher up in the mountains.

Maturana denied this particular allegation, but acknowledged that the project would have an impact on traditional grazing and herding practices. The company intends to compensate for this “by financing sustainable development projects” that have the approval of the community.

At the end of the year, the consortium will decide when it will present its environmental impact study to the authorities.

WHO ARE THE “REAL” DIAGUITA?

Although the Pascua Lama mine has not yet been built, Huascoaltinos say they are already suffering the effects of the “gold rush.” Barrick Gold has “bought off” consciences with “donations,” pitting neighbours and families against one another, they say.

Lucio Cuenca, of the Latin American Observatory of Environmental Conflicts (OLCA), said that Barrick has taken advantage of the community’s “cultural fragility” to divide it.

The company, which did not respond to enquiries by IPS, gives financial support to the Diaguita Cultural Centres, a collective organisation in which some Huascoaltinos also participate. This has sparked mutual acrimony between indigenous people in favour of and those against Barrick.

“I have not sold out to Barrick,” Ana Huanchicay, the president of the Cultural Centres which were founded in 2003, told IPS. But as approval for Pascua Lama cannot be revoked, the most effective approach is to monitor its operations from “within,” she argued.

“They had a machine going over one tip of the Toro I glacier, but that doesn’t mean they’ve destroyed it,” said Huanchicay, who encourages local people with Diaguita ancestry to register as such with the National Corporation for Indigenous Development (CONADI), as they are eligible for certain benefits.

This self-identification process has also created controversy. Although many Huascoaltinos have registered individually, it was the intention of the community to register en masse, since they are the collective owners of a large territory.

“We identify ourselves as both agricultural and indigenous,” said Campusano, who criticised the role of CONADI in the area because it promotes the creation of small Diaguita communities in different parts of the valley, which only leads to “disunity,” he said.

To defend what is theirs, the community has decided to declare its territory a Private Protected Wilderness Area. The group has also established contact with other indigenous peoples in Chile, like the Mapuche, and abroad, like original peoples in Canada and Papua New Guinea, who are also opposed to Barrick, in order to share their experiences.

They are also going into politics: Campusano is a candidate for mayor of Alto del Carmen, and other community members, like Clotilde Carvajal and Fernando Ardiles, are running for seats on the local council in the Oct. 26 municipal elections.

“We are fighting, but it is an uphill battle,” said Huascoaltino Miguel Salazar, who perseveres in the hope that he will not have to watch the death of the valley where he was born.