NEW YORK, Oct 9 2008 (IPS) - Wall Street may be in the throes of agony, but business is booming at the Holy Apostles Soup Kitchen a bit farther north in the Manhattan neighbourhood of Chelsea. 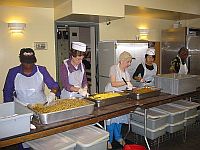 And that's not particularly good news.

Just ask Ishmael, a young man who has been eating his meals at Holy Apostles for about three months now. "I come here in order to save money," he told IPS. "I do have a job, but still cannot afford to buy food every day."

Ishmael also lives in a homeless shelter because renting an apartment is beyond his means – perhaps not surprising in a place that boasts the highest housing costs in the United States, with an average rent of 2,400 dollars per month, according to the real estate data firm Reis Client Services.

Across the city, New York's social services are troubled. Even as the weak economy drives more and more people to seek help in soup kitchens or shelters, advocates worry that the private donations they rely on will simultaneously begin to dry up.

Rev. Elizabeth Maxwell, interim executive director of Holy Apostles, is unsure how the church will cope with an inevitable surge in clientele in the months and years ahead.

"It's coming from both sides – the demand is increasing, the need is increasing and at the same time, the resources are shrinking. Due to the financial crisis – especially in a city like New York, where so much of the city's economy is tied to the fortunes of Wall Street – city government is going to cut and state government has already cut."

Maxwell said the Holy Apostles soup has already seen a "massive increase in the last year".

Patrick Markee, a senior policy analyst at the Coalition for the Homeless (CFTH), told IPS that the number of homeless families in New York has now hit an "all-time record" of about 9,000. "Only this month, the number of families entering shelters increased again," he said, interpreting the situation as a "real sign of an economic downturn".

Surviving in New York City without a decent salary can be an almost impossible task. Many adults in shelters share Ishmael's predicament – they have jobs, yet still cannot afford housing, CFTH says.

According to the Census Bureau's Housing Vacancy Survey, in 2005, one out of four New Yorkers spent half of their income on rent alone, leaving little left over for other necessities.

"Many people in New York have to choose between food and rent or between medical care and rent," Rev. Maxwell told IPS.

One out of five adults and one of four children in New York now live below the poverty line, which is 17,600 dollars per year for a family of three. This equals about two million people living in poverty, Markee told IPS.

Speaking to IPS, many homeless people expressed anger at the government. "This country is ass-backwards," exclaimed one man who gave his name as Robert. "The situation gets worse for the struggling individuals and only gets better for those who have money. This country is about to collapse and I'm pretty sure that there's going to be a revolt soon."

Edward, 55, became homeless when his father died and didn't leave a will. Two hospitalisations left him 3,600 dollars in debt. The federal government sends a cheque for about 150 dollars a month that he can use for food, but it's not nearly enough, he said.

Like Holy Apostles, whose budget is 2.7 million dollars, many of the city's estimated 1,200 non-profit soup kitchens and food pantries raise the vast majority of their funding from private individuals and foundations, with only a small percentage coming from the government.

"We're very concerned, because people's ability to give is going to be very impacted by the financial crisis," Rev. Maxwell told IPS.

"A lot of the foundations that we get money from certainly have a lot of their assets in stock market," added Mark Walter, Holy Apostles' development assistant. "So we don't know what's coming down the pike. New York State just cut its funding for hunger relief programmes by 16 percent and then a couple of months later, they announced that they would be decreasing it an additional six percent of the funds that have not already been spent."

The Coalition for the Homeless also raises 60 percent of its funding from private sources, Patrick Markee told IPS.

"We're definitely worried for contributions to go down with the financial crisis. Particularly after public holidays we get a lot of private donations. Now with the economy getting worse, these private donations might go down," he said, adding that the coalition would be highly dependent on donations due to an increased need.

However, the funding has already been reduced. "We're hoping for the best and planning for the worst," Markee concluded.

Throughout the country, homeless advocacy groups are reporting the most visible rise in homeless encampments in a generation. "The economy is in chaos, we're in an unofficial recession and Americans are worried, from the homeless to the middle class, about their future," Michael Stoops, acting executive director of the CFTH, said in a statement.

The New York City government may soon be forced to resort to the emergency measure taken by authorities in Reno, Nevada, where a tent city has been erected to house those who have tumbled through the widening economic cracks.