REYKJAVIK, Oct 9 2008 (IPS) - At the Hellisheidi geothermal power station, located about 30 km east of Reykjavik, Icelanders are developing novel ways of capturing carbon dioxide (CO2) and hydrogen sulphide (H2S) that are emitted from the plant. 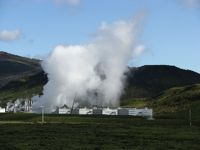 The CO2 project, called Carb-Fix, is researching the potential for carbon storage from the geothermal power plant in basalt rock, which makes up over 90 percent of Iceland’s bedrock and is volcanic in origin.

Calcite, also known as calcium carbonate (CaCO3), is formed naturally in the uppermost part of the geothermal systems in volcanic areas when a part of the CO2 reacts with calcium ions from basalt to form CaCO3. The group intends to develop methods to hasten the process.

The researchers intend to start injecting CO2 into the bedrock in 2009. The CO2 from Hellisheidi geothermal plant will initially be fully dissolved in fresh water and then injected into wells, to a depth of 400-800 metres. The team will then monitor what is happening to the CO2 and calculate how long the mineralisation process is taking; the geochemical reaction rate is a very important part of the project. Researchers from Columbia University in the U.S. and Universite Paul Sabatier in France are participating in the project, besides Icelanders. At the moment, 10 doctoral students are working on the project, along with specialists at Reykjavik Energy, Iceland GeoSurvey and Icelandic universities.

But what makes Carb-Fix different from other Carbon Capture and Storage (CCS) projects, which have sometimes been viewed with scepticism?

Project manager Holmfridur Sigurdardottir explains. “CCS and mineralogical storage of CO2 (Carb-Fix) both belong to geological storage of CO2. To date, CO2 is stored mainly as a gas in association with major gas and oil production facilities such as Sleipner in the North Sea, Salah in Algeria, and Weyburn in Canada.

“The uniqueness of the Icelandic project is that whereas the other projects store CO2 mainly in gas form, where it could potentially leak back into the atmosphere, the Carb-Fix project seeks to store CO2 by creating carbonate minerals in the subsurface. Calcite, a major component of limestone, is a common and stable mineral in the Earth known to persist for tens of millions of years or more.”

Sigurdardottir says that in geological CO2 storage, CO2 is stored in deep underground formations, such as depleted oil and gas reservoirs and deep saline aquifers. Oil and gas reservoirs have naturally stored CO2 and other gases and fluids for millions of years without significant leakage.

“However, nothing is absolutely sure. Therefore, mineralogical CO2 storage is aimed at permanently storing CO2 in the form of carbonate minerals. By bringing CO2 to its thermodynamic ground state, which is a carbonate mineral, potential health, safety and environmental risks are minimised,” she said.

Researchers will monitor for leakage of CO2 into the uppermost part of the groundwater system and into the atmosphere.

Sigurdardottir continued: “Iceland is made up of basalt, a rock that contains abundant divalent metal cations, such as Ca (calcium), Fe (iron) and Mg (magnesium), which are the building blocks for making stable carbonate mineral. The mineralisation of CO2 requires the availability of divalent cations such those listed above. Basaltic and peridiotic rocks consist of minerals rich in Ca, Mg and Fe and are therefore ideal for mineralogical storage of CO2.”

The geothermal plant at Hellisheidi produces a kilogramme per second of CO2 from condensers, although this will increase as the plant expands. Of the steam produced at Hellisheidi, 0.5 percent is geothermal gas, and 83 percent of this is CO2.

The H2S component of the steam has also been causing problems and is thought to be the probable cause of vegetation damage by the Hellisheidi plant. But there appears to be a solution to this too. An agreement has just been signed between Reykjavik Energy and the company Prokatin for a way of using H2S produced by the plant.

Arnthor Aevarsson, CEO of Prokatin, described the process involved to IPS. “The geothermal steam contains not only water but also about 1 percent geothermal gas, which is composed mainly of hydrogen (H), CO2 and H2S. There are micro-organisms, including some that live in hot springs, which can use H and H2S as energy sources and use the energy to fix CO2. You can make such micro-organisms grow in cultivation vessels by feeding them with geothermal gas and oxygen in a suitable salt solution under certain conditions. They will convert the H2S to solid sulphur or further to sulphuric acid.

“In such a way, you can use this biological solution to prevent emissions of H2S and CO2 from geothermal power plants. The microbial biomass that is formed in the process can be used to produce single-cell protein, which is a valuable product to meet a growing demand for protein sources for use in feed for fish farms, for example. It’s a promising process and we have applied for a patent for the technology. It’s a way to combine geothermal energy utilisation and biotechnology in a fruitful way.”

Finally, yet another way has been found of using CO2 from geothermal power plants. Carbon Recycling International has just signed a contract to use CO2 from a geothermal plant at Svartsengi, about 30 km southwest of Reykjavik, to produce methanol for bio-fuel for cars. This is yet another first for Iceland in this field.

The CO2-rich steam from the Svartsengi plant will be blended with hydrogen and is then converted into methanol. The company says that it is also possible to convert the methanol to dimethyl ether (DME), which can be used as a diesel substitute. Methanol and DME will be used to substitute 10 percent of petrol and diesel respectively.