FREETOWN, Oct 3 2008 (IPS) - Her reputation as a fiery orator is enhanced whenever she takes the podium, her punch softened by her broad smiles and gorgeous attires in West African style. 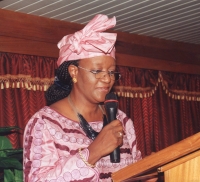 Zainab Bangura: "A woman leading this country? Yes, I still believe in it. Only time will tell." Credit: Lansana Fofana/IPS

Zainab Bangura, Sierra Leone's Foreign Affairs Minister, is arguably the country's best-known female politician and civil society activist. She has been making headlines since the 1990s, first by denouncing corruption and later by being the first woman to dare run for the country's highest office – the presidency – in 2002.

"It's been a difficult and challenging road," she told IPS. "What I have done is simply to inspire more women to step up and take prominent positions in governance, and take control of their destinies."

Zainab Bangura, who turns 49 in December, did not start out as a politician.

After graduating from the University of Sierra Leone in 1983 with a Bachelor's degree in political science and history, she joined a local insurance company as a claims and disputes settlement supervisor, and rose to manager of technical support services.

She married veteran politician Sheki Bangura and had a son, now at university.

But this was not enough for a woman whose vision and ambition transcended the corporate world of insurance brokering.

In 1996, when the first civilian government was elected after decades of one-party rule and military interventions, she founded the Campaign for Good Governance (CGG), a civil society organisation that advocated democracy, human rights, women's empowerment and good governance.

"It was time for civil society to act as the people's voice, putting pressure on public officials and the government to be accountable to the public," she says.

In six years, the CGG became a strong civil society actor and a reliable source for donors to measure good governance.

Abdul Tejan Cole, the current head of the country's anti-corruption commission, worked as human rights officer with CGG. "Zainab's organisational ability is terrific and her strength as an advocate for democratic causes remarkable," he told IPS.

In 2002, Bangura formed her own political party, the Movement for Change (MOP) and ran for president on a platform of fighting graft, guaranteeing women equal rights and ending poverty.

"I knew what I was up against in this male-centred society," she reflects. "But the fact is, women have to start somewhere and gradually we will make a significant difference. This is why I set the pace."

Despite the buzz generated by her candidacy, Bangura lost the elections and her party failed to win a single seat in parliament.

Her Achilles heel was her handling of the widespread practice of female genital mutilation (FGM), consisting in cutting the clitoris of teen girls as part of an initiation rite into the powerful women-only secret societies known as Bondo. Unicef estimates that 90 per cent of women in Sierra Leone have undergone the procedure – among them Bangura herself.

Her opponents claimed that she wanted to ban this practice, which is a valued element of the cultural heritage. Overnight, the anti-corruption champion became a traitor to tradition. Bondo societies turned against her; her campaign flopped.

Bangura, who denies that she ever wanted to ban FGM, told IPS that, "Some aspects of it must be modified or abolished. There must be age of consent. For instance, a girl aged 10 must not be forcefully initiated."

She would not, however, discuss the actual cutting or criticise it. "It was all lies peddled by my male opponents. They knew that was one way they could earn the votes of the womenfolk," she says.

Defeated but not vanquished, Bangura set up the National Accountability Group, a non-governmental organisation that campaigns for transparency in governance.

In 2005, she joined the United Nations Mission in Liberia as chief of civil affairs. There, she was again in contact with the person she most admires in the world, Ellen Sirleaf-Johnson, Liberia's president and Africa's first female head of state, whom she knew from her activist days.

But she wouldn't stay far from national politics for long. In 2007, the newly elected government of president Ernest Bai Koroma brought her home as minister of foreign affairs.

As the highest serving woman in the administration, she does not hide her feeling of accomplishment.

"I am the architect of Sierra Leone's multilateral and bilateral relations with the international community and this is a challenge I am prepared to shoulder," Bangura says.

Notwithstanding, controversy still dogs her. Prior to the Olympic Games in Beijing, she again made headlines when the media reported that she supported China's repression of the people of Tibet. China is a major donor to Sierra Leone.

Political observer Isha Kamara, who has followed Bangura throughout her career, says: "Zainab's political success lies in her controversial postures and frankness. She can discuss any subject under the sun no matter how little she knows about it. Nonetheless, she likes learning."

With four years to go before the next elections, Zainab Bangura is keeping her political cards close to her chest. But she has not ruled out her presidential ambition.

"I still have a long way to go in politics. The idea of a woman leading this country? Yes, I still believe in it. Only time will tell."