Q&A: ‘Media Must Find a Way for the Message’

ROME, Oct 23 2008 (IPS) - While there is clear evidence of growing global warming, “the political will to address it is still lacking,” says Mohan Munasinghe, co-winner of the 2007 Nobel Peace Prize as vice-chairman of the United Nations Intergovernmental Panel on Climate Change (IPCC). 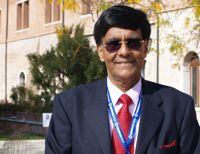 Munasinghe, also chairman of the Sri Lanka-based Munasinghe Institute for Development (MIND), which has contributed to the work of the IPCC, is among the keynote speakers at the Oct. 23 high-level seminar at The Hague organised by the Inter Press Service (IPS), the rights and development organisation Oxfam Novib, and the Netherlands’ National Committee for International Cooperation and Sustainable Development (NCDO).

The meeting focuses on the support base for sustainable development and international cooperation, and seek ways to deepen the roles and responsibilities of both mainstream and alternative media in this.

Media will be urged to look at the connections between issues. Development, poverty and climate change are all related problems, Munasinghe said. “In order to make development more sustainable in the next 10-15 years, these problems must be addressed all together.”

IPS: What is the danger in isolating these issues? Mohan Munasinghe: There are several risks related to isolation. The most important is conflict. When you look for a solution to one problem, it may make the other problem worse.

The second problem is that you may have duplications, and this happens when people who work for solving one problem are sometimes doing the same thing that other people are doing already. In that case, they are wasting resources; economic resources but also political will.

The third and most important issue is lack of cooperation. In order to face all these multiple crises, we have to get everybody together, we have to create that sense of consensus, a spirit of global consciousness. If everybody is working on their own problem, it is like going back to the old selfish solutions.

IPS: How can such a consensus be built, and can the media help? MM: Building a consensus means starting with the transition, this means to make development more sustainable. This is where I think the media have a key role. Consensus can be built looking for what we call the win-win solutions. We have to create the feeling that all are working together.

Of course there are some difficulties…the modern capitalist system works exactly the opposite, it is built on competition; and that is not going to help us to solve these global problems and develop a global consciousness.

Ideologically, isolationism is based on the capitalist market system, and seems to encourage this idea that if everybody thinks only of themselves, then social or collective good will emerge. But this is manifestly untrue. If there are no safeguards, not only legal, but moral and ethical safeguards, we are going to have what is called a race to the bottom, that is, the people with the worst behaviour will win.

IPS: Would a scientific rather than ideological approach work better? MM: In science we have seen the success of reductionism. Everything you study in greater and greater detail, even a very obscure, detailed topic, makes you an expert in that. But you know almost nothing about many other areas…

If you look at the way ancient societies have been built – take the Egyptian civilisation that lasted thousands of years – they were built on cooperation. We have forgotten that cooperative side. Many communities, particularly poor rural communities, have survived because of the community spirit.

IPS: But cooperation is also opposed by economic factors… MM: Absolutely. In fact, the erosion of traditional values which we are seeing in many parts of the developing world is leading to a breakdown of social capital. Sustainable development has an economic, a social dimension, and an environmental dimension. The economic dimension is clearer, we want to produce more, increase GNP (gross national product) etc. The environmental dimension of development is also becoming clear, in the sense that we all want clean air, clean water and so on.

The social dimension is more complicated, because it is the glue that binds society together. This ultra-competitive mode, without ethical and moral values, is instead leading to violence, and will lead to fighting over resources.

There are some economic forces that are in a way taking the neo-conservative line…We have to rethink that, and come back to this concept of social capital. Increasingly, in a globalising world social capital is not only good for the community and the village and the city and the country, but for the entire planet.

IPS: After the unequivocal IPCC (Intergovernmental Panel on Climate Change) report, are environment and climate now on top of the political agenda? MM: There are some politicians who are like the ostrich, either because they are ignorant or because they represent lobbies and communities who are profiting from the present unsustainable system. But there are many others who are very responsible, who are trying to move in a new direction. We have to identify the good actors and support them.

As a civil society person, with my institution (MIND), I am entirely devoted to that, particularly with young people. We make them feel that as individuals they can make the difference, and also show them the sense of respect that does not dismiss anybody, even a corrupt politician; the message is ‘maybe your job is to change them, to go out and do something’.

And I have the same attitude towards business; we have to work with all of these people, we need all of them. Some of them are very difficult to live with, I agree, but that is the job of the social activists.

IPS: Can you refer explicitly to politicians and countries performing well? MM: Well, there are a number of environmental performance indexes that have been developed by private think tanks. But these lists are not perfect, and we shouldn’t be complacent. I mean, ‘top countries’ also need to improve, because if you are at the top of the list but you still allow other countries to be at the very bottom, then you’re not doing enough, it is not good enough to be at the top of the list. That is the consensus building; the success is pulling other people.

IPS: What could information do? MM: I think media have a tremendous role to play. I am referring to the responsible media, because there is a spirit of competition among media as well. Everybody wants to win the Pulitzer Prize, sell products, make money and so on. So, we need responsible journalism. And I think that increasingly people are looking for responsible articles.

The problem I have is that I’m in a generation that reads newspapers, but my children are much more TV oriented, and if I look at my grandchildren, for them information comes just through You Tube, short messages and so on. I have no way of reaching those people through what I write, or even this interview…but you media know the tools. How do we get to those people, I think this is the challenge.