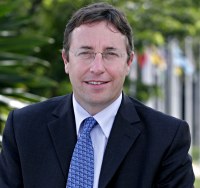 Steiner, born in Brazil, was elected executive director of UNEP by the U.N. General Assembly in March 2006 for a four-year term.

He left his position as head of the World Conservation Union (IUCN), where he had served since 2001. In 1998 he had been appointed secretary-general of the World Commission on Dams, based in South Africa,

In this email interview with Tierramérica’s Stephen Leahy, Steiner applauded Mexico’s "significant environmental initiatives such as the National Develop Plan, where the environment is one of the five pillars."

He also underscored that Mexico, which will be the host city on Jun. 5, 2009, for the next World Environment Day, "can play a crucial role in the 2009 climate change conference in Copenhagen," and could become "the example of a successful green economy for the rest of Latin America."

TIERRAMÉRICA: Mexico, like all Latin American countries, has traditionally looked to its natural resource base – oil, gas, minerals, agriculture – to drive economic growth. Do you see this changing? ACHIM STEINER: I think Mexico is at the crossroads between the traditional resource-driven economy and the coming new green economy. Future prosperity, in my view, is in green technologies. Mexico is already moving in this direction. It exported solar photovoltaic products worth 2.3 billion dollars last year alone.

The National Solar Water Heater Programme (known as Procalsol) aims to have 2,500,000 square metres of installed systems in Mexico by the end of 2011. This could mean 100,000 new jobs. By 2020 this could grow to 23.5 million square metres of installed systems keeping 27 million tons of climate-warming carbon dioxide gas out of the atmosphere. That is very significant.

TIERRAMÉRICA: What is happening in other Latin American countries in this regard? AS: Brazil and Costa Rica are among the leaders making the transition. We need an entirely different economy in the future to prevent dangerous climate change. It's crucial for countries to help each other so we can move forward at a far greater pace.

TIERRAMÉRICA: The 1997 Kyoto Protocol (the climate treaty that entered into force in 2005) created the Clean Development Mechanism (CDM) to help transfer and fund green technology in developing countries. Has Latin America benefited from this? AS: Very recent data from UNEP’s Risoe Centre in Denmark estimate that Brazil is the leader with 303 CDM projects and, as of September, Mexico is second with 187 CDM projects either approved or in various stages of approval.

Experts at Risoe stress that Latin America has huge opportunities in terms of energy efficiency, which remain to be exploited. By 2012, there could be a total of 1,600 Latin American and Caribbean CDM projects in the pipeline or registered – a more than two-fold increase.

This means a lot of technology and financing is coming to the region. And we expect to see significant expansion of the CDM over the next 10 years amounting to hundreds of billions of dollars.

TIERRAMÉRICA: Do you think climate change is seen as an important issue in Latin America? AS: The public is worried about climate change. Many in the region have experienced hurricanes, droughts, and flooding, all of which will worsen in the future. It is imperative to act. The CDM is providing funds and technology to ease the transition to greener, less carbon intensive economies.

TIERRAMÉRICA: The nations of the world will meet in Copenhagen in 2009 to negotiate a new treaty to tackle the climate change crisis. What will Mexico’s role be? AS: Mexico has a very important leadership role to play, acting as bridge between the (industrialised) North and (developing) South. We must find a fair deal for all countries and I believe Mexico's experience will be invaluable in offering creative ideas and helping to incubate agreement. I think Mexico's success under the CDM offers a good example of what can be accomplished in terms of technology transfer and funding.

TIERRAMÉRICA: The U.S. economic crisis is affecting global markets and the economies of other countries. What is the appropriate response? AS: Whenever there is an economic crisis the long-term perspective is lost. However, the green economy, the shift to a low-carbon economy, is the wisest investment Mexico or any country could make.

Investment in energy efficiency, for example, creates jobs and reduces energy costs and carbon emissions. It's a win-win-win strategy. During an economic downturn the best investment is in green technology. New investments in these technologies surpassed 148 billion dollars in 2007, a 60 percent rise from 2006. The era of cheap oil is over.