RIGHTS: A Home Shouldn't Be a Luxury

UNITED NATIONS, Oct 24 2008 (IPS) - Increased reliance on private banks to provide housing will cause more homelessness in cities across the world, warns a top U.N. expert on rights. 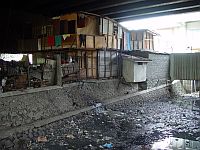 "The belief that markets will provide adequate housing for all has failed," said Raquel Rolnik, the U.N. special rapporteur on adequate housing. "A home is not a commodity. It is a place to live in security, peace and dignity."

Rolnik, an architect and expert on urban planning, wants policymakers to create a better system that provides more housing options and avoids relying on a single solution.

"Excessive focus on homeownership as the one and single solution is part of the problem," she added. "Homelessness does not affect only the poor. It also threatens those who work but cannot afford market prices."

While most analysts see home foreclosures in the United States as the result of liquidity problems or lack of regulation or a combination of both, Polnik offers a completely different viewpoint.

"The sub-prime mortgage crisis reflects fundamental flaws in our approach to housing and the inability of market mechanisms to provide adequate and affordable housing for all," she said.

Rolnik predicts that there is likely to be sharp increase in the number of homeless people in the United States as homeowners and renters are being increasingly affected by foreclosures.

"With the continuing housing and financial crisis spreading to many countries," she said, "things are only going to get worse. Millions more may face eviction because they cannot pay their mortgages."

Rolnik's mandate involves reporting annually to the Geneva-based U.N. Human Rights Council on the right to adequate housing throughout the world, and identifying practical solutions towards this end.

Her criticism of pro-market housing policies came the same day Anna Tibaijuka, the executive director of UN-Habitat, released a new comprehensive report, entitled "On the State of the World's Cities."

The 264-page report points out that about 33 percent people in the cities of the developing world live in slums, many of them without adequate access to sanitation facilities and clean water.

"The financial crisis we are facing today cannot be seen as an event – it is a process that has been building up over time and this process now has bust," Tibaijuka said Thursday, urging governments to take responsibility for providing decent shelter to the poorest members of society.

The UN-Habitat report shows that inequality in housing is also on the rise in many countries in the developed world. According to the report, U.S. cities are "as unequal" as cities in Africa and Latin America.

"Major cities, such as Atlanta, New Orleans, Washington, and New York, have the highest level of inequality in the country, similar to those of Abidjan, Nairobi, Buenos Aires, and Santiago," the report's authors said.

In Canada and the United States, one of the most important factors determining levels of inequality is race. The latest research shows that most of the families losing homes in the United States are African American and Latino.

In a report released last summer, the U.S. Department of Housing and Urban Development said there were more than 120,000 people in the country who were facing homelessness. But independent studies suggest the numbers are much higher than that.

According to the Substance Abuse and Mental Health administration, about four million people in the United States experience homelessness in a given year. The homeless account for more than 10 percent of the country's poorest.

Still, as the U.N. study points out, the poor in many cities in the United States are not subjected to as much suffering as those working to survive in large cities of the developing world. The report's authors warn that high level of inequality in the urban setting could lead to negative socio-economic and political consequences and could prove to be a catalyst for destabilisation for many societies.

In raising concerns about the increasing levels of urban inequalities, Tibaijuka called for world leaders to realise that there is an urgent need for "effective urban planning, governance and management."

That, according to Rolnik, would require that policymakers are not merely focused on homeownership as the one and single solution to ensure access to housing.

"The increase in foreclosures and homelessness limits the ability of cities and communities to fund social programmes, and spreads urban blight," she said. "Those countries that have not done so should legally recognise the right to adequate housing for all."

In her view, some so-called "developing" countries are more advanced in that regard than many wealthier ones. She holds that housing legislation and policies should be defined with the contribution of all relevant stakeholders, not only by finance departments or the construction industry.

"Increasing public assistance for housing and ensuring it is available to all those in need is the way to prevent the current threat to our cities and communities, Rolnik said. "Markets, even with appropriate regulation, cannot provide adequate housing for all."