LIMA, Oct 31 2008 (IPS) - The bodies of three civilians, victims of a 1985 massacre perpetrated by Peruvian soldiers in the highlands village of Accomarca, were disinterred by their families and judicial authorities. They may be the last to be exhumed by judicial order. 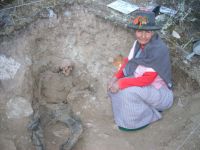 Between Oct. 20 and 25, the remains of Agustín Chávez, Seferino Baldeón and Filomeno Chuchón were exhumed from two clandestine graves. The men were among the 69 people murdered in August 1985 in one of the army’s bloodiest operations against civilians during the 1980-2000 “dirty war” against the Maoist Sendero Luminoso (Shining Path) guerrillas.

So far, 36 bodies have been recovered. In another mass grave discovered this year, the remains were so damaged and intermingled that it is still not known how many people were buried there.

Four army patrol units took part in the operation in Accomarca, a group of scattered hamlets in the impoverished Andean province of Ayacucho in southern Peru.

The one led by then second lieutenant Telmo Hurtado, who is currently in prison on immigration charges in Miami, Florida, killed most of the victims, who included children, elderly people, and pregnant women.

Until recently it was thought that the involvement of the other units was limited to security duties – that they were staked out around the village to keep watch, and to keep people from escaping. But it has now come to light that all four units killed local villagers.

Filomeno Chuchón’s body was buried at a place called Huambalpa. He was seized by the soldiers, forced into service as a guide, and executed after the massacre by order of Hurtado.

Agustín Chávez was 64 years old, and Seferino Baldeón was 55. They were killed at Pitecc, on the way to Accomarca, on Aug. 13, 1985, the day before the mass killing.

To dig up the remains of civilians is also to dig up the truth. The three bodies confirm that the patrol units involved in Plan Huancayocc, which had the approval of the army high command, “had orders not to leave anyone alive,” the lawyer representing the survivors, Karim Ninaquispe, who witnessed the exhumations, told IPS.

“The day before the Accomarca massacre, the patrols commanded by (lieutenants) Juan Rivera and David Castañeda joined forces in Pitecc. That was where we found the bodies of Agustín Chávez and Seferino Baldeón, who were executed by the soldiers. Castañeda is alleged to have murdered Baldeón,” she said.

Castañeda lives in the United States, where his applications for political asylum have been turned down, while Rivera was deported to Peru by the U.S. authorities.

“The local people say that the soldiers coming from Accomarca brought him along, tied up, and then they shot him. Chuchón had been handed over to Telmo Hurtado by army intelligence, and he was forced to act as a guide. They executed him at Huambalpa on Aug. 15, 1985. That’s why the discovery of his body is so significant,” she said.

Judicial and forensic authorities were present at the exhumation of Chuchón’s remains, as was his widow, Narcisa Mendívil, his only daughter, Victoria Chuchón, his grand-daughter and his sisters.

Victoria, who was 10 years old when her father was killed, lit votive candles by the grave.

The exhumations at Pitecc and Huambalpa were the last to be carried out by judicial order. There will be no more, because relatives do not know precisely where victims are buried, or because some bodies are thought to be irrecoverable.

The remains of Brígida Pérez and her son Alejandro Baldeón, for instance, were destroyed when a highway was built over their clandestine grave.

“We don’t know of any other burial sites, although according to our information there may be a grave in an area known as Lloccllapampa, containing the remains of five children. But we have no witnesses who can locate the exact spot,” said Ninaquispe.

While Hurtado’s deportation from the United States is awaited, Rivera, who is in prison, appeared in court and denied taking part in the crimes, contradicting testimony that he himself gave in 1985.

The deadline set by the National Criminal Court for Judge Percy Vargas to complete the investigation phase of the trial expires in two weeks’ time. After that the judge must decide whether to prosecute.

But many hurdles lie ahead.

So far, the Institute of Legal Medicine (IML) in Lima has not identified any of the remains found this year, although the judicial branch has requested several times that it perform the necessary DNA studies.

“There is very little willingness on the part of the IML. They haven’t even taken samples from direct relatives of the victims to establish the identities of the bodies that were found,” Ninaquispe said.

“We have had to resort to the non-governmental Peruvian Forensic Anthropology Team to collect samples and send them to laboratories in the United States. We don’t trust the IML authorities because they show nothing but lack of interest, lack of sensitivity and apathy in a case as serious as that of Accomarca,” she said.

“Now we need the cause of death to be corroborated for the three victims we have found. We are hoping for justice,” said the lawyer for the non-governmental Runamasinchiqpaq human rights association (ADEHR).