MANZINI (Swaziland), Oct 25 2008 (IPS) - Shupikai Machinya, a Zimbabwean cross-border trader who attended the recent Southern Africa Social Forum in Manzini, Swaziland, is one of the many delegates who wanted to understand just how a country ends up in debt. 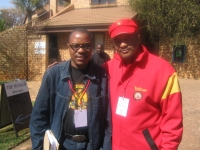 Machinya frequently travels to South Africa where she acquires basic goods for resale in Zimbabwe. In Zimbabwe basic commodities such as salt, sugar, rice, cooking oil, bathing soap and maize-meal are rarities as a result of the devastating economic problems that the country is facing.

Although she belongs to the fledging Cross-Border Traders Association of Zimbabwe, debt and development remain distant issues for her. ‘‘I only know that debt is money borrowed by the government from outside but how it's used and for what reason nobody knows,’’ Machinya told IPS.

‘‘We have heard that our government has borrowed lots of money since independence to build roads but no new roads were built after 1980 (the year Zimbabwe achieved independence). They even lied that they wanted to make the road from Harare to Beitbridge dual carriage as nothing has happened.’’ Beitbridge is a border post between Zimbabwe and South Africa.

The just ended social forum meeting in Manzini discussed debt among Southern African countries and how it can be effectively managed for the benefit of communities.

But why the fuss about debt?

‘‘The problem of debt is central, it's a social problem. The United Nations Development Programme estimates that poor countries pay four times more than they borrow, yet they ought to be spending more on health and education,’’ argued Dakarayi Matanga, executive director at the Zimbabwe Coalition on Debt and Development (ZIMCODD).

ZIMCODD is a civil society organisation interested in developing Zimbabwean people’s capacity to redress the debt burden and unjust trade practices and building and promoting alternatives to the neoliberal economic and social agenda.

Matanga regards debt audits as necessary to understand how debts are incurred and repaid and whether citizens are involved in the whole process of incurring them. Matanga urged SADC countries to initiate debt audits, saying regional countries have a common history of debt and how it affects citizens.

Multilateral debt is owed to a consortium of lenders, like the World Bank or regional development banks such as the African Development Bank. Official debt, he said, is owed to public sector lenders. Publically guaranteed debt originates from loans made to state-owned enterprises or private companies where the payment is guaranteed by the government of the debtor country.

‘‘We should be concerned about the issue of a country's indebtedness because debt is an obstacle to human development. Debt results in the use of scarce resources for servicing debt instead of investing in people's wellbeing,’’ said Matanga.

According to ZIMCODD, Zimbabwe is one of the countries with a high and unsustainable level of indebtedness. Zimbabwe's total external debt stood at 4,9 billion dollars in 2007, an amount as big as the country's gross domestic product (GDP).

Matanga further stressed that for ordinary citizens like Machinya to benefit from debt, a host of things have to be put in place. He recommended that SADC civil society organisations keep an eye on government borrowing; institute legal reforms through advocacy to parliaments to force governments to be accountable to citizens; and launch mass public education on debt issues.

*This is the first of two articles. Follow the link below to read the second.