TRADE-MALAWI: The ABC of Being a Successful Business Woman

LILONGWE, Oct 15 2008 (IPS) - Through hard work and resilience, Malawian entrepreneur Mary Phombeya has developed her once small and struggling business outfit into a fully fledged company. She imports fashionable clothes – for women, children and men – from Dubai, Thailand and Hong Kong which she sells locally. 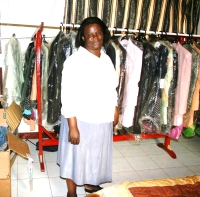 ‘‘Although I have only been in this business for two years now, I feel like I have come a very long way. I have achieved so much despite facing some very tough challenges,’’ 40-year-old Phombeya tells IPS.

Initiated in April 2006 with a measly 3,000 dollars, the clothing business has given her a five-bedroom house in one of the affluent areas in Malawi’s capital, Lilongwe. She is also able to send her two children and three other relatives to the country’s distinguished schools from the profits she makes.

‘‘I was so reliant on my husband before I started my business. But I am now very independent as I have a daily cash flow from the sales,’’ Phombeya says proudly. She makes an average profit of 5,000 dollars per month and provides employment to two women.

The business is different from when she kick-started it two years ago. She did not even have a business plan. ‘‘I had no real vision at all when I started. I just decided to accompany somebody to Hong Kong who had been selling clothes to me. I brought back whatever I could lay my hands on but most of the clothes did not sell because I had only bought what I’d liked,’’ she explains.

Phombeya learnt her lesson from that incident and decided to take her trade to greater heights. She went around to offices, asking potentials clients what their desired piece of clothing would be.

‘‘I only got things right when I decided to acquaint myself with the needs of my customers. I always make sure that I know exactly what I will sell to what type of buyer,’’ says Phombeya, as she bustles around her boutique, hanging up pieces of clothing from the consignment she has just brought back from Thailand.

It is her dedication to her customers that has supported Phombeya’s business, Flora Kabati, one of her most reliable clients, tells IPS.

‘‘She has the interest of her customers at heart. She knows what my choices of clothing are and she does not go wrong. She has supplied me with office wear, casual wear and even clothes for special events like a wedding or a party,’’ enthused Kabati.

Phombeya makes the most of every chance to network with fellow traders. She is always in the company of colleagues when she travels abroad to procure clothing.

‘‘You want to feel safe when you are walking around a strange city. We walk long distances scouting for affordable goods. Sometimes we cover a distance of up to 20 kilometres,’’ says Phombeya.

It only takes two days to gather enough merchandise for sale but that she spends four days flying to and from Malawi. ‘‘It is very tiring and challenging. One needs a lot of patience and determination to do this.’’

There are a number of sacrifices that Phombeya has to make in her quest for an income. She throws the need for privacy to the wind during her travels as she usually shares a hotel room with four other traders. This helps them save money.

She also has to be tough and stop herself from being enticed to buy goods that she might want for herself and her family while shopping for her customers.

‘‘This business demands a lot of discipline and self-control. Sometimes I get really fascinated by all sorts of good things but I ensure that I don’t get lured into buying those things,’’ says the merchant. Once she went to Dubai and ended up shopping for her own house, thus losing business opportunities.

She has to sell such clothing at a higher-than-usual price if she is to realise profits.

The business woman also has to contend with high transportation costs when flying the goods into the country. She pays seven dollars for every kilogramme of luggage.

Most of Phombeya’s customers buy the clothes on credit. They pay her in instalments. This also poses a challenge because not all her customers honour their debts. ‘‘Some people get the clothes and change their telephone numbers while others move houses. It’s very difficult to trace such people and I lose out.’’

Others get aggressive when she reminds them to pay and hurl insults at her.

Phombeya, however, is not being slowed down by the challenges she encounters. She plans to spread out into more business ventures in the coming year and is eyeing the distribution industry.

‘‘I already have plans in place to be a distributor of soft drinks and mobile phone credit. I am sure I will make it and I will be a much bigger trader than now,’’ Phombeya confidently adds.

She holds a Master’s of Science Degree in Agricultural Economics which, she says, has also helped her in being resourceful.