PORTLAND, Oregon, Oct 20 2008 (IPS) - Veterans from the U.S. occupation of Iraq and Afghanistan, along with Iraqis, Afghanis, Vietnam veterans, and family members of U.S. military personnel converged in this west coast city over the weekend to share stories of atrocities being committed daily in Iraq, in a continuation of the "Winter Soldier" hearings held in Silver Spring, Maryland in March. 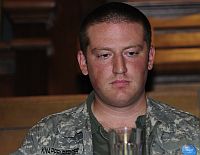 Even Knappenberger, Iraq war veteran: "We are murderers of over one million Iraqis." Credit: Mike Hastie

At the Unitarian Church downtown, some 300 people gathered to hear the testimonies, which left many in tears. The five-hour event was comprised of three panels; Voices of Veterans from Iraq and Afghanistan, The Human Costs of War, and Building Resistance to War.

The goal of the event is to give veterans a platform by which to disseminate information about their experiences abroad to the general public.

"War changes people. You do not come out of a combat zone the same," Iraq war veteran Chanan Suarez Diaz told the audience while moderating the veteran's panel. "War is very numbing…it comes to a point that you see so much destruction you become numb. This bullshit about bringing democracy or liberation is nonsense – we've killed over one million Iraqis."

Jan Critchfield, an Army National guard specialist, discussed his job working in Iraq as an army "journalist", that in his words, "I was a propagandist, pure and simple."

A somber Critchfield said, "I'm not proud of any of what I did over there – it was inhumane and it changed me as a person. I didn't do anything but yell at people, push people around, and aim my gun at people."

Other vets spoke as photos taken by soldiers were shown on a large screen above the stage.

Josh Simpson explained his work as an army counterintelligence agent in Iraq. "We would go to houses without any evidence, arrest people, and pay our source hundreds of dollars. This was common, it was a crazy cycle."

"We were raiding houses every night in Mosul," he continued. "You ransack their stuff, then ask our officer who he wanted to detain."

The number of people detained was a measure of success for a unit, Simpson explained. "People's mothers would be grabbing me, asking me why I was taking their child away, and I never had an answer. It's terrible to push an elderly Iraqi woman away so you can take her child and load her into your Stryker vehicle, when you don't even believe they belong there."

Evan Knappenberger served one year in Iraq with the Army 4th Infantry Division working as an intelligence analyst. "We are responsible as soldiers, we are murderers of over one million Iraqis," a visibly shaken Knappenberger said. "I participated in burglary, trespassing, knowledgeable negligence, criminal assault and battery, rape by association, and gangsterism, I am standing here today as a criminal – in a sense of the word that only someone who has worn the uniform can understand."

"While I was in Iraq, I did many things, but nothing for freedom," he added. "We've lost this war on the polemic battleground of semantics. By naming arbitrary rules of engagement, we rationalised murder – this I witnessed…by calling it liberation, we justified occupation, this I witnessed…"

Chris Arendt, who was a block guard at the Guantanamo Bay detention centre during 2004-05, spoke of his experiences "working at a concentration camp, and the people I was working for were invading other countries."

He explained, "I had a lot of time to think about things. What we do there is completely contrary to our own set of laws. We have 650 people in Gitmo right now waiting for us to do something with them. What have they done? They don't even have charges! We are ruining people's lives."

"Time is the silent killer there," Arendt explained, "You just put people in a cell and tell them they are never going home, and watch them slowly break apart. I wish I was angrier when I was there, but it was impossible to feel there, you can't feel, feelings are just not something you want to bring there in your rucksack., but I'm still trying to unpack them, three years later."

David Mann was an Army Specialist who was deployed to Nasiriyah, Iraq in 2003 and forced to return after his tour ended under the "stop-loss" policy for a second deployment to Balad, Iraq in 2005.

"We were told not to stop when children ran in front of our vehicles as we invaded Iraq," he explained, his voice cracking. After being stop-lossed, Mann checked himself into an emergency room after threatening to kill himself.

Weeping he continued: "I told them I was going to kill myself if I had to go back to war. I was sent back…every man, woman and child who has died in this war has died in vain, because it was a war based on lies and profits."

The event was sponsored by Iraq Veterans Against the War (IVAW) Seattle Chapter, the American Friends Service Committee, PDX Peace Coalition, and the American Iranian Friendship Council, among many others.

On another panel, Dr. Baher Butti, formerly the chief psychiatrist at a mental health clinic Baghdad, told the stunned audience, "The Iraqi population has mass post-traumatic stress disorder, everybody is just trying to survive."

"There is now more bombing in Afghanistan than in Iraq, because they are so short of troops," Dr. Wahab explained, "The average family lives on one dollar per day, two million people are seriously mentally ill, 70 percent of Afghanis are traumatised. The society is being murdered by the occupation, and it's being done on live television."

Iraq war veteran and former Marine Benjamin David Lewis, 23 years old, also attended the event. Lewis, who has served two tours in Iraq and four years as a Marine, including being in Fallujah during the November 2004 siege that killed thousands of Iraqis and destroyed much of the city, had just received his involuntary activation order to redeploy, as he is in the Individual Ready Reserve.

"My plane to Kansas City that takes me to be screened and get my orders leaves tomorrow," Lewis told IPS on Oct. 18. "Presumably I'll get my orders to go to Iraq or Afghanistan, but I'm going to refuse to activate."

Lewis explained that when a soldier is screened for deployment, they have five months to get their affairs in order before being shipped abroad. At the end of this five months, he has decided he will publicly refuse his orders to deploy.

When asked why he would refuse the orders, Lewis said his decision was based on educating himself about the goals of the U.S. government and military, coupled with his experience in Fallujah during both 2004 sieges, of which he said, "My battalion in spring 2004 was operating in direct contravention of the Geneva Conventions (GC)."

"During the spring siege we sent military-age males back into the city, and were ordered to kill them," he told IPS.

Of the November siege, Lewis added, "The intention of the military was to take over and occupy the main hospital in Fallujah, which violates the GC's, as well as our being ordered to target all 'military age males'."

The intention of his refusal to activate is "To let the American public and other veterans know that this is an illegal war, and everyone should be opposing it."

The first Winter Soldier event was organised in 1971 by Vietnam Veterans Against the War in response to a growing list of human rights violations occurring in Vietnam.

From Mar. 13-16, 2008, IVAW held a national conference titled "Winter Solider: Iraq and Afghanistan" outside Washington, DC. The four-day event brought together veterans from across the country to testify about their experiences in Iraq and Afghanistan.

"If we are going to end these occupations, we have to share this pain," Camilo Mejia, Iraq veteran and Chair of the Board of IVAW stated to conclude the veterans panel. "Only by sharing this pain, and acting to end it, can we heal ourselves and educate the American public."