HARARE, Oct 16 2008 (IPS) - The Southern African Development Community (SADC) is mobilising economic aid for its troubled member state Zimbabwe. The economic aid package is part of efforts by the region to help bolster the faltering political deal, widely regarded as the initial phase towards the recovery of Zimbabwe's wretched economy. 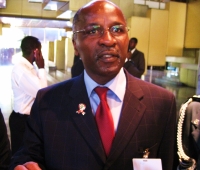 Southern African leaders, who came to Harare last month to witness the signing of the power sharing agreement, have tasked the SADC Secretariat with the crafting of an economic package for Zimbabwe.

SADC Executive Secretary General, Tomáz Augusto Salomão, who was also in Harare for the signing ceremony and has been involved in efforts to resuscitate the country's economy, told IPS that his office has been working on an economic blue print for Zimbabwe since 2005.

‘‘We are working on a package to help finance the recovery of the Zimbabwean economy. The signing of the political settlement augurs well for this programme. We hope the political conditions in the country will improve and help the quick implementation of this programme,’’ Salomão expounded.

His office has conducted studies of the Zimbabwean economy and will now be adding new elements of the political agreement into the final blueprint. ‘‘There is no doubt that the signing of the deal will provide that much-needed momentum for us to kick-start the economy of Zimbabwe.

‘‘We have put in place a fund to help finance the recovery of the Zimbabwean economy. We have looked at its policies, the central bank, agricultural sector, monetary policy and exchange rate determinants,’’ said Salomão.

Asked about the amount of money and the conditions that might come with the package, he said, ‘‘that's an issue for the SADC leaders to determine’’.

He did not give any timeline for the implementation of the financial package, only saying that it will depend on the political deal.

Article three of the Zimbabwe power sharing agreement addresses economic issues. It talks about issues to do with the restoration of economic stability and growth. Since 2000, when the Zimbabwean government embarked on farm invasions, the country's economy started plummeting, the currency lost value and the country became one of the worst countries to do business in.

The negotiating parties agreed to give priority to the restoration of economic stability and growth in Zimbabwe; to work on an agricultural recovery plan; to establish a national economic council which will be made up of representatives of all sectors of the country; and to endorse the SADC resolution on the country's economy which flows from the SADC Secretariat’s studies.

Several SADC leaders have spoken of the urgent need to put together resources for Zimbabwe. South Africa has been leading the efforts, with its former president Thabo Mbeki having already put into motion an agricultural plan for the 2008 to 2009 farming season.

That country's treasury, agriculture and foreign affairs departments have been working on acquiring farming inputs and implements for Zimbabwe before the start of the agricultural season.

Although Zimbabwean farmers have already started receiving seed maize and fertilizer as a result of this intervention it is not yet clear if the new South African administration under president Kgalema Motlanthe, which has been critical of President Robert Mugabe, will take over from where Mbeki's administration left.

Meanwhile other international funding institutions such as the Bretton Woods institutions have expressed interest in engaging the new government of Zimbabwe as long as it shows commitment to economic reforms.

The European Union, a key funder of many humanitarian projects in Zimbabwe, has announced that it will provide 10 million euros in humanitarian aid to the country.

Brussels said the funds, following the signing of the power-sharing deal between Mugabe and opposition leader Morgan Tsvangirai, will be used mainly to assist in the provision of clean water, health and sanitation requirements for the most vulnerable population groups.

European commissioner for development and humanitarian aid Louis Michel said: ‘‘The EU's humanitarian assistance is neutral and impartial and not an instrument of politics. I expect all restrictions on humanitarian operations to be totally lifted as a result of the recent political settlement.’’

The aid is on top of 15 million Euros in food aid already made available to the country this year.

The EU has welcomed Zimbabwe's power-sharing deal but has said it wants to see how Mugabe and Tsvangirai implement the deal on the ground before it can commit itself to providing more significant aid for the rebuilding of the southern African country's collapsed economy.

Brussels said targeted visa and financial sanctions imposed on Mugabe and his government officials six years ago will remain in place for now until they show genuine commitment to building a stable and democratic country.

Although some of the financial aid seems to be coming with strings attached, it seems to be trickling down. The Zimbabwean government has already announced that it has secured 80 million dollars for maize and fuel imports from African Export Import Bank (Afreximbank).

Afreximbank is a multilateral financial institution whose main objective is to facilitate, promote and expand intra and extra African trade.

Some analysts however believe that it will take more than just donations for the economy to start ticking again.

‘‘Optimists believe that when the politics normalise, Zimbabwe will revert seamlessly to the mostly unsuccessful growth path of the 1990s. That is wrong,’’ Harare-based economist Tony Hawkins, a professor at the Graduate School of Management at the University of Zimbabwe, said at a meeting in Pretoria, South Africa last month.

He also stressed that international donors would not support a new government in which Mugabe or the ruling ZANU PF still had a big say in policy. Mugabe's government is accused of having destroyed Zimbabwe economically in its bid to hold onto power.

According to Reserve Bank of Zimbabwe figures, the country's external debt was estimated to be at 4.8 billion dollars in 2007, while domestic debt has also been rising.

*This is the first article in a series of two. Follow the link below to read the second article.