PHNOM PENH, Nov 10 2008 (IPS) - Cambodia’s fishing industry may still be viewed as a male bastion, but as household fish catches decline, putting pressure on food security, women are rising to the challenge and becoming involved in growing numbers. 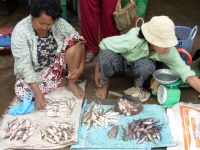 Cambodian women are getting increasingly involved in the fishing industry. Credit: Andrew Nette/IPS

Just as researchers and scientists do not agree on what is behind the decline in fish catches, there is uncertainty over the extent of women’s growing participation in the sector and whether this is a desirable trend.

“The reality is that women have been deeply involved in fisheries for a long time in this country, from catching, to processing, to cooking fish,” said Mak Sithirith, executive director of Fisheries Action Coalition Team (FACT), an organisation working with local communities on Cambodia’s Tonle Sap lake.

“Although I do not have the figures to back it up, I am certain that women are gradually becoming more and more involved in the fisheries sector,” said Sithirith, whose organisation recently organised a day-long seminar in Phnom Penh on women in fisheries.

“For women it is a catch-22 situation. If they do not go with their husbands they cannot guarantee food security because the husband cannot catch enough fish. But if they do take part it increases the burden of labour on them.”

The role being played by women in fisheries mirrors broader changes in Cambodian society, which have seen an increase in women’s involvement in all sectors of the economy, formal and non-formal.

According to figures released this year by the Ministry of Women’s Affairs, Cambodia’s female labor force participation rate is high by regional standards, at over 71 percent of the working age population over 15 years of age.

This is partly the result of a decade-long decline in household fish captures, a vital food security issue given that fish account for 75 percent of protein consumed in Cambodia – 90 percent in fishing communities.

“Most people still think that fishing is done by men and that only men have the skills to use the equipment required. But as fish catches decline many more people are needed to catch the same amount,” said Tep Chansothea, a researcher with the Community Based Natural Resource Management Learning Institute (CBNRM).

“More effort is required for the same output. Women are thus being called on to help in areas that they were not involved in many years ago.”

“Household fish captures are definitely going down,” according to Eric Baran, research scientist with the World Fish Centre in Phnom Penh. “This is not necessarily because the stock is collapsing.”

“Put simply, there are more and more people sharing the catch, meaning a reduced catch per person,’’

Observers believe many factors are behind the decline in household fish captures, in addition to rising population levels. These include an increase in illegal fishing equipment, lax enforcement of fisheries regulations, clearing of flooded forest, and rising pollution levels.

The government has no figures for how many women are involved in the fishing industry in Cambodia. Women have always worked in the sector, although traditionally in so-called ‘post-harvest’ activities such as drying, processing and selling fish.

Over 102 different types of fishing gear have been identified as being used in Cambodia, according to Baran, and different equipment has traditionally been used by men and women.

“A possible change in the involvement of women in fisheries has yet to be assessed and remains an area where research is urgently needed,” he said.

As fisheries decline and women do not have alternative livelihood strategies, they increasingly assist their husbands in new areas, whether it is classifying and organising the catch in the boat or actual fishing.

The results of a yet unreleased research project about the status of women in community fisheries in six Cambodian provinces, by CBNRM, World Fish Centre and the Fisheries Department at the Ministry of Agriculture, Forestry and Fisheries, also point in this direction.

It found women play an important role in household fisheries activities and the management of community fisheries, particularly in inland or floodplains fisheries.

Just as there is no agreement as to the exact extent of women’s role in fisheries, there are different views as to whether it is a positive or negative development.

“There are certainly some clear benefits from women being more involved in community fisheries,” agreed Yumiko Kura, Mekong programme coordinator for World Fish Centre and one of the study’s researchers.

“Women are generally seen as better at managing the money that is generated. They are better at information dissemination and education activities,’’ Kura said. “They play an important role in explaining to their husbands and others why they should not use illegal fishing gear and getting them to give this up. If men do this it often ends in violence.”

There are also significant downsides of women being involved in what is widely viewed as a tough, dangerous and dirty industry.

“Their involvement in fisheries means that women have even more work,” said Sithirith. “They are expected to take care of the family at the same time as helping the husband fish.’’

“Certainly there are negative impacts,” said Chang Kim Hong, a fisher in a floating village in central Kompong Tom province who attended the FACT meeting.

“It has an impact on their health because women have to work even more. It can also be dangerous depending on the type of fishing. Because they often lack experience they cannot identify the onset of major storms or winds exposing them to even greater risks.”

“The more time women spend fishing, the further they may have to travel,” she said. “This means that older children must sometimes stay home to look after things when they should be at school.”

At a broader level there is also debate about whether it is desirable for women to become more involved in fisheries, given the uncertain returns from the industry.

“At a global level moving away from fisheries is a major policy push on the part of many government and global institutions,” said Baran. “Twenty years ago these same organisations were pushing for more people to get involved in fishing. Now it is the other way around because stocks are being progressively overfished.”

“One of the major policy pushes is to find a way out of fisheries for the benefit of fishers and fish,’’ Baran added.

“Fishing is one of the few cash-making options for many families, so they are not going to give it up, particularly in heavily flooded areas were there are no other options to generate income for large parts of the year,” countered Chansothea.

“The government’s view is that men are still the key players, women have no voice. There is an urgent need to develop women’s networks in the fishing industry. By doing this, women can connect and speak collectively. Otherwise they will remain isolated,’’ Sithirith said.