MEDELLÍN, Colombia, Nov 28 2008 (IPS) - The global financial crisis has not demoralised those involved in community projects throughout Latin America and the Caribbean who took part in ECLAC’s fourth social innovation fair, which ended Friday in this city in northwest Colombia. 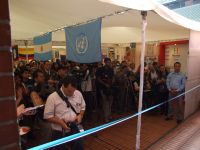 Optimistic based on her lengthy experience evaluating sustainable development plans, Colombian economist Norah Rey de Marulanda said the countries of the region have learned their lesson and will not reduce spending on education, health or other social areas, "at least not drastically, as some predict."

Nevertheless, Rey de Marulanda, a member of the Committee of Notables that selected the finalists in the Experiences in Social Innovation contest organised by ECLAC (Economic Commission for Latin America and the Caribbean) with support from the W.K. Kellogg Foundation, says "the global crisis will affect the region, without a doubt."

"Private philanthropy funds will be reduced, because companies will cut back on their funding as the profit margins of their investments shrink," she said at the three-day fair in Medellín.

"However, I believe the same thing will not happen in the case of non-governmental organisations that through different channels receive funding from governments, from Europe for example, because governments have budgets and obligations that they have to live up to," she said.

In a conversation with IPS during the fair, Rey de Marulanda, a former Inter-American Development Bank (IDB) manager of integration and regional programmes, expressed her conviction that the governments of Latin America will be much more cautious now when it comes to cutting social spending, even if they do limit it somewhat.

"A lesson was learned from the crisis of the 1980s," when public spending was drastically reduced, she said. "Unlike at that time, there are democratic governments in all of Latin America today, and this is a question of governability.

"If poverty rates rise, there will be protests," and the social pressure will function as an antidote, "because it has been seen that governments can fall if that kind of problem is not addressed," she said.

"That is one of the big advantages of democracy," Rey de Marulanda added.

"Problems could occur, however, in countries in the region which already have very low levels of social spending, in some cases as low as 50 dollars a year per person. That is insufficient to start with, and if it is cut by 10 dollars, it’s almost as if it disappeared completely," said the expert.

Concurring with that view, ECLAC recommends keeping social spending levels steady, because "otherwise poverty will grow substantially once again, and in five or 10 years, social problems will become acute, and governance will be affected."

The first line of defence against a crisis like the current one, which originated in the United States, is often communities themselves, because of their potential to organise people and come up with creative solutions, no matter how isolated and plagued with problems they are.

As ECLAC Commission Secretary Laura López said, economists must not forget that solutions to problems can come from communities themselves.

And that is the point of the Experiences in Social Innovation contest that the U.N. regional agency and the U.S.-based W. K. Kellogg Foundation have held every year since 2004.

The response has been fruitful for the 12 finalists of the 2007-2008 edition, as well as for the steady flow of visitors Wednesday through Friday to the installations set up in the central square of the University of Antioquia, which was selected to host the fair.

The finalists chosen from 874 applicants are 12 projects from eight countries in Latin America and the Caribbean: Argentina, Belize, Brazil, Chile, Colombia, Cuba, Ecuador and St. Lucia.

The initiatives come from a wide variety of communities, including a slum neighbourhood in Chile, the Cuban countryside, and indigenous communities in Colombia and Ecuador. They represent innovative ways of improving education, health, environmental conservation, nutrition, income-generating capacity and gender equity, and include youth and social responsibility programmes.

According to ECLAC, "All of these initiatives have contributed effectively to the social development of communities and to reducing poverty and exclusion. They all have in common their creativity, active citizen participation and reasonable costs."

The five prize-winners will receive, in descending order, 30,000, 20,000, 15,000, 10,000 and 5,000 dollars from the W. K. Kellogg Foundation, as well as technical and institutional support from ECLAC, which will monitor the projects and provide backing in their relations with governments and public bodies.

"The important thing here is not the funds, which of course are a help, but the backing received and the credibility gained from a positive evaluation by the regional U.N. agency," one of the heads of the "A Roof for Chile" project, which works in a slum neighbourhood in Santiago, told IPS.

"We are seeking a sponsor who will understand how professional we are, in order to combat erroneous beliefs that those who work with the poor are allowed to build mediocre housing," he said.

That is what the applicants are seeking: visibility, to show that solutions to problems, no matter how serious, are more sustainable and substantial if they arise from and include the communities themselves.

The finalists say their projects are sustainable, despite the crisis.

Cuban Professor Nelson Valdez is a delegate, along with farmer Agustín Pimentel, of a project that contributes to ecological balance on small farms in the Cuban province of Pinar del Río.

"We are carrying out a number of ecological and productive measures to restore production levels in degraded ecosystems, and to recover biological, agricultural and forest biodiversity and improve the living standards of farmers," Valdez, an agricultural researcher, explained to IPS.

The Cuban innovative community development experience "began over two years ago and has been replicated in other rural parts of the country, with very good involvement and guidance by the state.

"But we have practically funded the project out of our own pockets, those of the researchers and the farmers themselves," said Valdez, who added that the prize money, as well as the support from ECLAC, would be very welcome.

He said "this initiative breaks with the scheme, given the case of Cuba, of a vertical state where everything is done according to guidelines based on a preconceived, planned concept of development.

"Represented in this project are the national forest ranger corps, the central coordinator board of the mountain plan, a unit of the Ministry of Science, Technology and the Environment, and local farmers, who have created a participative atmosphere in which everyone wins," he said.

The idea of the participating university researchers is that the farmers will eventually run the project on their own.

Pimentel admitted that the project got off to a rocky start. He said it was originally conceived of for just 10 families, but today involves around 2,400.

"At first, there was little comprehension of what the project was about, and it was hard going," said the farmer. "But now we are respected and accepted, as indicated by the fact that we are here with authorisation from the state."

All 12 finalists have already won, just by making it to Medellín, where they have been able to draw attention to their innovative social initiatives with active community involvement – thus showing that communities from vastly distant and different places can come together to contribute solutions.