POLITICS-GHANA: The Fruits of the Future

ACCRA, Nov 26 2008 (IPS) - The upside: three political parties selected women as vice-presidential candidates in the general elections of Dec. 7, the first time ever in Ghana’s history. The downside: the parties are small and have no real chance of victory. 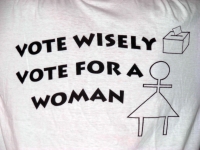 Does the handful of women nominated bode well for the future? Credit: Mercedes Sayagues/IPS

Among the three, two – the Reformed Patriotic Democrats (RPD) and the Democratic Freedom Party (DFP) – have no members of parliament, and the People’s National Convention (PNC) has three, out of a total of 230 MPs.

Gender activists were pleased but not overjoyed.

"It is a move we welcome but it is not what we have been working for," said Frank Wilson Bodze, of the gender group Women in Law and Development in Africa (WILDAF), which lobbies for a fair representation of women in government.

In Ghana, 11 percent of Parliamentary seats and just fewer than 16 percent of ministerial posts belong to women, according to the Progress of the World’s Women Report 2008 of the United Nations Development Fund for Women (UNIFEM).

The three leading political parties – the ruling New Patriotic Party (NPP), the National Democratic Congress (NDC) and the Convention People’s Party (CPP) – had made noises about choosing women candidates for the veep position, that remained just that – noise.

"It would have made more sense to us if the leading parties had selected women at the top level," said Bondze.

On 14 October, when the PNC announced that Petra Marie Amegashie was the first ever woman vice-presidential candidate in Ghana, and the RPD and DFP nominations quickly followed, many gender activists cheered. Other decried the move as cosmetic.

"The selection of these women by the elders of their parties was based purely on their competence," Asiamah said. "They were given the chance to prove their worth, and no one can draw any link between their selection and that of Sarah Palin with the US Republican Party."

In the recent elections in the USA, veep candidate Sarah Palin was widely judged to be ill-prepared for the job by 60 per cent of American voters.

Cosmetic or not, the three candidates – whose family name coincidentally starts with an A – have credentials on their own right.

A newcomer to politics, Amegashie, 49, combines the skills of a businesswoman with the stamina of a Catholic missionary. She worked with Bayswater Contract Mining and with the Novotel hotel chain, studied to be a missionary at Missio Ad Gentes in Rome and worked with the National Catholic Secretariat. Before joining the PNC, she had considered running for president as an independent.

For this, says Bondze, "her being bold enough to take the decision to go independent must inspire other women in the country to take politics seriously."

Patience Ami Ameku, a 58-year-old teacher and the DFP candidate, was the district chief executive for Kadjebi, in the Volta Region, in Eastern Ghana, between 1988-1993. From 2004 to 2007, Ameku was Assistant Director of Education at the Ghana Education Service.

The RPD candidate, Rosemond Abraham, 40, a wealthy businesswoman in the cosmetic industry, has the least experience in politics. The RPD General Secretary, Francis Kyie, told IPS that "as someone who has been running seminars all over the country to empower women [to go into the cosmetics business], we believe that she has so much to bring into the country’s politics."

Regardless of their chances of winning, having women candidates run for the country’s second highest office brings benefits. It encourages greater political engagement by ordinary women.

Unifem’s Progress Report notes that in the United Kingdom elections in 2001 women voters turned out in slightly higher numbers than men in elections for seats with a female candidate.

As Joyce Mfum, a teacher in Accra, told IPS: "Change does not just happen one day. What these three parties have done is to sow the seed which would definitely bring some fruits in the future."

Somewhere out there, a little girl is watching, waiting for her turn.