PHNOM PENH, Nov 19 2008 (IPS) - When Gunnar Bergstrom stepped off the plane into the sweltering heat of the Cambodian capital in August 1978, he did not even begin to suspect the fate that had befallen the country whose struggle he had supported from afar. 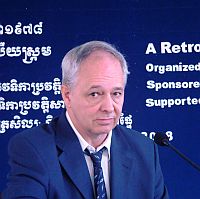 Part of a delegation from the pro-Khmer Rouge Sweden-Kampuchean Friendship Association (SKFA), and one of the few groups of Westerners allowed to visit Democratic Kampuchea, Bergstrom and his friends were greeted by a group of black-clad Khmer Rouge officials.

“We knew that the Khmer Rouge had emptied Phnom Penh and other big cities, that was no surprise,” Bergstrom told a seminar here this week.

What they did not know was that the people were being overworked, starved, tortured, and executed as part of an ultra-radical social experiment that would ultimately lead to the deaths of nearly two million Cambodians.

“We did not see the murders and killings, we had no idea about [the interrogation centre] Tuol Sleng.”

“I understood that some things were arranged but not everything,” he says of their 14 days in country, during which they travelled widely and had dinner with the secretive Khmer Rouge leader Pol Pot and his foreign minister Ieng Sary.

“Now I think the whole trip was propaganda and we should never have made it,’’ said Begstrom. “It is still a mystery about how you can delude oneself so much. We were fooled by smiles but what fooled us the most was our own Maoist glasses we wore.”

The agenda behind Bergstrom’s current visit, his first since the delegation 30 years ago, is very different from that which inspired the 27-year old Maoist in 1978.

With the assistance of the Documentation Centre of Cambodia, an non-government organisation (NGO) dedicated to archiving the history of the Khmer Rouge, he will retrace the delegation’s journey, hoping to get the life stories of the people they met all those years ago.

As part of this, he will showcase a display of photographs he took during the visit, entitled ‘Gunnar in the Living Hell: Democratic Kampuchea, August 1978’.

He hopes it will shed light on the final days of the Democratic Kampuchea regime, and generate wider debate about the nature of truth and propaganda with Cambodians, the majority of whom have no memory of the Khmer Rouge in power.

Like thousands of intellectuals in the sixties, Bergstrom supported the revolutions in Laos, Vietnam and Cambodia and thought the new regimes would usher in better societies.

“I was active in the movement against the war in Vietnam when I was 19,” he remembers.

“The first demonstration I went to was about Cambodia. We were young and many of us were recruited after a while into the Maoist movement.”

“People did not want Soviet communism, but we young people thought China was different, that it was an ideal society where there were no oppressors.”

Soon after the Khmer Rouge took power, the SKFA asked permission to visit but were knocked back.

Then in April 1978, permission was granted, part of a broader public relations drive undertaken at the time by the regime.

The delegation returned to Sweden where they undertook a speaking tour and wrote articles in support of the Khmer Rouge. “After six months I left that movement because I realised I had been wrong about the Khmer Rouge,” recalled Bergstrom.

Although most other members of the delegation feel the same as Bergstrom, one member continues to defend Pol Pot, and their visit remains controversial today.

Bergstrom and his delegation were not the only Swedes to visit Democratic Kampuchea.

“In 1976, the country’s Beijing ambassador and a senior official from the foreign ministry came, returning with positive reports of what was going on,” says Eskil Frauck of the Living History Forum, a quasi-government think tank in Sweden that is co-sponsoring Bergstrom’s visit.

“Delegations from the United States and other European countries returned with positive stories,’’ Frauck said. “This all made it easier for the world to believe life in Democratic Kampuchea was much better than it was.”

Bergstrom’s delegation was taken to factories, agricultural cooperatives, schools and a hospital. They went to the port of Kompong Som, now Sihanoukville, where they saw rice being loaded onto ships for export to China.

“We thought this was proof they were self sufficient, that they were able to grow more rice than they needed.”

For their audience with Pol Pot, they had to submit questions in advance. “We gave him nine. One was about the accusations of genocide. He denied it was happening and said it was just Western slander.”

“I had no strong impression of Pol Pot. People asked me if he seemed crazy. At the time he seemed normal. That was even scarier in retrospect because it meant he was a rational killer.”

One part of the dinner that makes Bergstrom laugh today was a brief conversation he had with Ieng Sary in French. “He asked me who should be allowed to come to Cambodia, should they let in journalists from the Swedish media.”

“I told him of course they should, that they had nothing to hide,” he says, smiling at the irony.

It is what Bergstrom and the other members of his delegation did not see during their time in Cambodia that haunts him.

By late 1978, not only had the Khmer Rouge leadership purged those suspected of being intellectuals or supporting the old regime, but also ethnic Chinese, Vietnamese, and large sections of their own movement deemed not sufficiently loyal to Pol Pot. This had resulted in open rebellion in parts of the country.

Large parts of Cambodia were experiencing severe famine, and relations with Vietnam had completely collapsed over repeated border incursions by the Khmer Rouge. Hanoi was only a few months off a full-scale invasion, which occurred on Christmas day 1978.

“Since we did not speak Khmer we had to speak to people through an interpreter,” says Bergstrom. “That’s one of the main reasons they were able to make sure we saw only what they wanted us to see.”

“Anytime I saw something disturbing I was able to fall back on the excuse that the revolution was young and they will learn,” he admits

The photographs taken by Bergstrom and another member of the delegation are a haunting reminder of the manipulation they faced trying to interpret the truth of what they were being shown.

In addition to overt propaganda shots of cultural performances are pictures of smiling children, factory workers, men and women eating in communal halls, and people planting rice against the backdrop of the lush Cambodian countryside.

Age has given the pictures a washed out, grainy feel. The colours are muted and much is clocked in shadow. The country they depict is poor but functioning. There are no pictures of torture, starvation or violence.

“I have spent a lot of time trying to figure out what was fake and real,” says Bergstrom. “The hospital we visited was definitely fake, as there were no hospitals.”

“We were taken to a technical high school in Phnom Penh, which was either a fake or a school for the children of senior cadres.”

“Certainly the cooperatives we visited were model ones that they must have shown all visiting delegations.”

“I cannot undo the trip. I can only make things right now. For my part I am sorry. If you ask me did I feel guilt, yes.”