HARARE, Nov 15 2008 (IPS) - "I was raped by four Zanu PF militias at night, just outside their base, during the elections. They took turns to rape me, accusing me of supporting the opposition, MDC [Movement for Democratic Change]", said Pauline Moyana* from Mutasa, a community in Zimbabwe’s eastern Manicaland province. 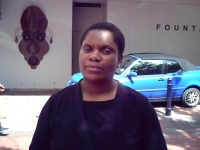 "They threatened to kill me and my family, so I had no choice but to give in to their demands", she added. Moyana’s homestead was destroyed and her livestock killed as "punishment" for her alleged political affiliation.

Another woman, 53-year-old Sophie Makore* from Hurungwe in northern Zimbabwe, says she has lost hope following a gruesome experience at the hands of Zanu PF activists. A few months ago, militia men stripped her naked and raped her multiple times. Like in Moyana's situation, the perpetrators told her she was being penalised for supporting the opposition party.

Moyana and Makore's testimonies are only two of many women’s accounts from rural Zimbabwe that have taken place during the bloody and controversial presidential election rerun held this June. One woman from eastern Zimbabwe was drained by a doctor of 250 millilitres of semen after having been gang raped for three days.

Stories of brutal militia raping young girls and women old enough to be their mothers and burning of houses of MDC supporters are now being recorded by a group of women rights activists who want to bring perpetrators to justice at the International Criminal Court (ICC).

So far, only one man has been jailed for the rapes that have taken place during the last few months. He was sentenced for 22 years in south-western Zimbabwe's town of Masvingo.

Well-known Zimbabwean activist Betty Makoni recently formed the Zimbabwe Rape Survivors Association (ZRPS), an organisation that records women’s politically motivated rape cases, lobbies for legal justice and rehabilitates rape survivors at a safe house in neighboring Botswana, as many women, out of fear of retribution, are too scared to testify in Zimbabwe.

"Most women were attacked physically but also suffered spiritual damage. They are afraid of going back to their villages," says Makoni. "The women are highly traumatised and, what makes matters worse, ostracised by local communities."

"The pattern of the cases is that of systematic political persecution. Testimonies from women reveal how army chiefs and Zanu PF militias deliberately embarked on a campaign against MDC supporters. We are talking of state-sanctioned violence here," she added.

ZRPS cooperates with a team of lawyers from US-based advocacy organisation AIDS-Free World to gather evidence and seek legal recourse through international or regional courts. Makoni said ZRPS will take the cases to courts outside of Zimbabwe, because the country’s legal system does not have a history of trying cases of human rights violations in a transparent manner.

"So far, we have assisted some 150 rape survivors, and 20 have given us evidence for our case affidavits. We are working hard on bringing all culprits before justice", said Makoni, revealing that, already 180 men, mainly army officers, have been listed as respondents.

AIDS-Free World co-director Paula Donovan told IPS she believes the systematic and widespread nature of the rapes will make a strong submission in court, even though Zimbabwe is not party to the Rome Statutes of the ICC, which tries persons accused of crimes against humanity.

" What has become clear is that such widespread nature of the sexual violence constitutes crimes against humanity. We know Zimbabwe is not a signatory to the International Criminal Court Convention, so [if the cases will be not heart by the ICC] there are many avenues of pursuing them, for example by getting a referral from the United Nations Security Council", explained Donovan.

If the United Nations Security Council agrees in an unanimous vote that the cases are of gravity, it will open the doors for Zimbabwean government officials to be prosecuted, except for the country’s president, who retains immunity. The accused can be charged under universal, regional jurisdiction of countries party to the international treaty of crimes against humanity.

Donovan says another option is to bring the cases before the Africa Court on Human and People's Rights, although it was worrying that the court has not tried a single case in the ten years since establishment. Another stumbling block is that only 24 of 53 African Union member countries have ratified the protocol creating the court in 1998. Rights groups blame bureaucracy and lack of political will for the delay in justice.

"It’s unfortunate that justice processes are slow but the women want their cases tried, whatever it takes," said Donovan.

Activists say it is crucial that the cases are brought to court so that women’s rights can be restored in a country that has committed itself to Millennium Development Goal 3, which aims to create gender equality and empower women.

The claims of Zimbabwean rights organisations have found support from multiple international human rights bodies. Amnesty International last month called for judicial justice for all perpetrators of state-sponsored violence in Zimbabwe, lamenting that human rights violations with impunity are on the increase. Another human rights watchdog, Human Rights Watch, reported that sporadic violence is on the rise in the wake of the unity government stalemate between Zanu-PF and MDC.

*Not their real names.