KAMPALA, Nov 18 2008 (IPS) - ‘‘We have lots of orders for apple banana. There is a ready market for kibuzi in London. It is eaten from Monday to Monday. But how to get it there is the issue. Almost 60 percent of the cost goes to freight.’’ 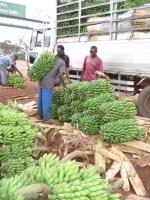 This is one of James Kanyije’s main complaints. He is the director of Icemark Africa, a leading Ugandan company that exports vegetables and fruit, including bananas. Bananas for cooking, commonly known as matoke, are gaining popularity in the UK and U.S., which have large populations of Ugandans in the Diaspora.

‘‘The demand is there, especially for kibuzi (a local name for a type of cooking banana with short fingers known to last long without ripening). I have decided to plant several acres near Kampala,’’ Kanyije told IPS.

But banana exports, like other fruits and flowers, are limited by bad roads in parts of the country and the lack of electricity for freezer transport and packaging.

Kanyije has mobilised farmers to cultivate more of the apple banana in central Uganda. He says some farmers’ lives have changed. They can now afford basic things like school fees, better shelter and clothing.

‘‘If you want to prove this, go to Kalagala and see. We have few grass-thatched houses there; men are now travelling by bicycles. The women are wearing better busuti (local traditional dress) because we pay them in cash,’’ he said.

Transport costs are also of concern to Nalongo Nalule. She said when her husband was alive she was not allowed to sell their bananas. Her husband reasoned that the bananas were meant to feed their ‘‘big polygamous family’’.

When coffee wilt disease attacked coffee plants in most parts of Uganda in the mid-1990s, farmers lost a major source of income. They could no longer afford to send their children to school, or to foot expensive medical bills or pay for family necessities.

Farmers in the districts of Masaka and Rakai in central Uganda and Ntungamo, Isingiro, Buhsenyi and Mbarara in western Uganda had to devise other means of income generation. So they switched to cultivating bananas but not only for income.

The farmers in these areas mainly grew green cooking-bananas for food. They are now taking apple and Cavendish bananas for sale to other parts of the country.

Said Nalule, ‘‘we used to get money from coffee but when it got this disease I had to sell some of the bananas to take care of the family.’’

Now Nalule at times decides to transport the bananas personally to the Malaba border in eastern Uganda when she gets orders from her customers in Kenya. Kenya is one of the major banana importers from Uganda. Ugandan Cavendish and apple bananas are in big demand in Kenyan supermarkets.

From her earnings, she has managed to educate some of her children and orphans of her deceased sons and daughters. A significant obstacle to her business is the high transport costs which are affecting her profit margins.

Muhammad Batuma is a regular banana supplier to the Ugandan capital of Kampala. He harvests about 100 banana bunches per month, for which he earns 800,000 shillings (420 dollars).

Matovu Tennas from Rakai enthused over demand for bananas in his area being ever-increasing. Many traders come to his village seeking apple and Cavendish bananas which are mainly exported to Kenya and Southern Sudan.

‘‘We as farmers are now earning money. In the past these bananas used to rot at the time of harvests. The bananas are now selling because traders come right up to our gardens. I have just planted three acres of Ndiizi (apple bananas) because people want them to take to Germany and [the] UK,’’ Tennas told IPS.

Uganda is a major supplier of bananas to the European markets, with about 1,000 tons exported per year. Companies like Icemark Africa, Amfri and Hortexa are the primary banana exporters of Ugandan bananas to Belgium, Germany and the UK.

While some farmers are benefiting from the banana sales, there are still some challenges in the sector. Apart from the costs related to exports, farmers in other parts are battling the banana bacterial wilt disease that has attacked almost half of the country.

Uganda also has banana export opportunities in the regional markets of Rwanda, Democratic Republic of Congo, Southern Sudan and in Burundi especially, with a new project turning dried banana into flour. The flour can be used to bake bread, cakes and biscuits.