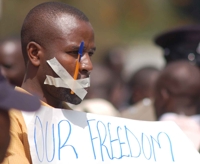 Described by critics as draconian and retrogressive, the law confers new powers on the minister for internal security to raid a media house and confiscate broadcast equipment during a state of emergency.

It also bestows sweeping powers on the minister for information and broadcasting to control every aspect of the country's media and communication sector, putting to risk the independence of the media.

"We do not raid media houses anymore. This is just a measure that can only be taken during emergencies."

But memories of a 2006 raid on the offices of the Standard Newspapers, the country's second largest newspaper in Kenya, and her sister company Kenya Television Network are still fresh. Armed officers with masks raided the establishments in commando style, following exposes of massive corruption by the government of President Mwai Kibaki.

In 2007, parliament passed another media law that demanded greater media control, compelling journalists to disclose their sources of information. This saw hundreds of journalists take to the streets, their mouths shut with duct tape symbolizing that they were gagged. The law, which was awaiting presidential assent, was later rejected by president Kibaki, who sent it back to parliament, and ordered for it to be re-drafted.

The Dec. 10 Bill follows a heightened media campaign against excesses of parliament, with the media arguing they are being victimised for carrying out their mandate of informing the public. "The law was passed as an act of revenge on a media that stands guard on the excesses of a parliament gone bad; a parliament in which members have increased their salaries without care and refused to pay their taxes while Kenyans go to bed hungry. Parliament has now passed a law to ensure the media can never again tell the Kenyan people about their impunity and irresponsible looting of our taxes," said Martin Khafafa, the vice chairman of the Media Owners Association.

The media has in the past days carried stories about MPs refusal to pay tax on their allowances, which are up to three times their salary. Only the salary of an MP, which is about 2700 dollars a month is taxed. The allowances of each of the 222 MPs, amounting to about 8000 dollars a month, go untaxed, in a country where 40 percent of the population lives in abject poverty, according to last year's government figures.

Authorities claim they support press freedom. In a Dec. 15 meeting with media owners, Prime Minister Raila Odinga said the government was committed to a free press, adding that the media on its part needed to be responsible. He is yet to meet president Kibaki to ask him not to sign the Bill that has sparked countrywide protests.

Odinga has distanced himself and his party from participating in the crafting of the Bill. However, most of the MPs were not in parliament when the Bill was passed, a common occurrence. Lack of quorum characterises the Kenyan parliament, with less than 30 of the total of 222 MPs typically attending parliamentary sessions. In the case of this Bill, only 24 MPs were present in the House.

In addition, the Bill gives the Communications Commission of Kenya (CCK), a state agency, extreme powers to regulate the media, contrary to the much supported principle of self-regulation of the media in a democratic state. This is causing discomfort among media practitioners who say media regulation is a task already being performed by the Media Council of Kenya (MCK), an independent professional body.

"I am not opposed to regulation of the media. But the government is taking some of the functions of the MCK and giving them to the CCK. The CCK is not qualified to regulate or arbitrate over media content," Macharia Gaitho, chairman of the Kenya Editors' Guild told IPS.

"The fact that the Bill gives blanket powers to the CCK to do anything without reference to any other authority is questionable; CCK can easily become a political tool," he asserted.

There are fears that with the state moving in to regulate the media, Kenya may be going the way of Ethiopia, where radio and television remain under tight control of the government. The government of the Horn of African country has a long history of restricting press freedom, where it has continued to imprison journalists, according to the International Press Institute (IPI), a global media organisation concerned with the protection of press freedom.

Last year, the government pressed anti-state charges on 15 journalists linked with a brutal media crack-down that took place in 2005, IPI says. Though they have since been released, human rights groups and press freedom bodies monitoring the country say the government has continued to repress the media through arbitrary arrests and intimidation. The country has thus been added on the IPI Watch List following grave concerns about the deteriorating media situation.

Other East African countries have also moved to gag the media. In Tanzania already a law exists allowing the state to seize broadcasting equipment, while neighbouring Uganda early in the year, formed a cabinet committee to establish new laws that will govern the media. This, coupled with the recent string of verbal attacks on the press by President Yoweri Museveni, media observers contend, sets the stage for blanket control of the media by the state.